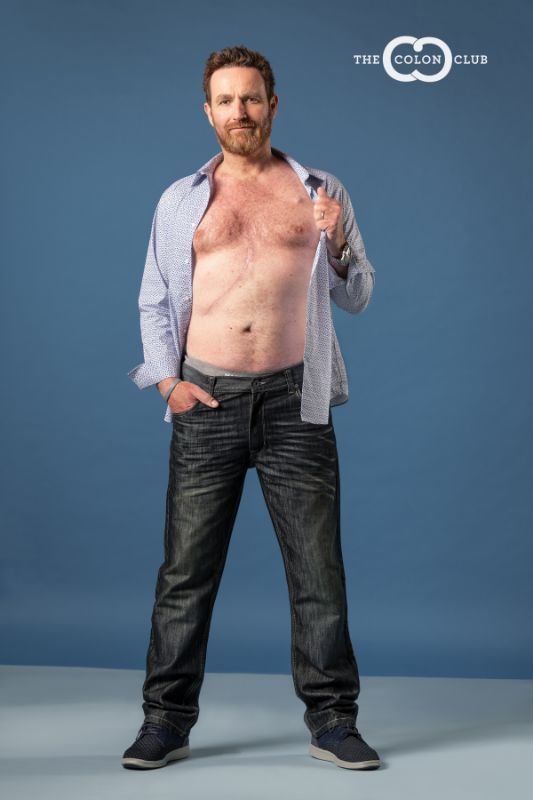 Scott Wilson is no stranger to cancer. Eight years before he was born, Scott had a brother, Roddy, who died of kidney cancer at the age of two. Then, sadly his mother, Joyce, was diagnosed with colon cancer in her fifties and passed away at 59. These experiences made Scott believe he would face cancer in his life. Unfortunately, he was right.

Scott was diligent about dealing with his family history and discussed his concerns with his local general practitioner while he was in his mid-forties, ten years before the age his mother was diagnosed. He lived in the UK at the time; and, as he had no symptoms at that point, he was given a fecal occult blood test instead of a colonoscopy. In the UK, the prerequisite for a colonoscopy due to family history required two deceased relatives with a history of colon cancer, so Scott did not qualify. In August of 2015, Scott and his family moved to Colorado and, even though his previous fecal occult test had come back negative, Scott noticed blood in his stool less than a year after moving. A colonoscopy and subsequent scans revealed Scott, by now 48, had stage IV colon cancer with liver metastasis and that his primary tumor had been growing for around five years, predating his negative fecal occult test.

As a husband, father, landscape photographer, and professional in global corporate affairs for Molson Coors, cancer was going to have an incredible impact on Scott’s everyday life. After the initial panic, he and his amazingly supportive wife, Jaione, focused on keeping things as normal as possible for their two children, Andrew and Alba - then 14 and 10 - who were still adjusting after their transatlantic move. Scott would keep working through debilitating side effects from aggressive chemo. He would still attend all his children’s many sports activities while battling fatigue and sunlight. He would refocus his lens on wildlife photography from the protective shade of his car because the extreme photosensitivity caused by his chemo prevented him from shooting landscapes. Scott says, “I wanted my kids to see a living, normal dad, my wife to see a living, normal husband, my family to see a living, normal son and brother; my friends and colleagues to see a living, normal Scott... I wanted my dead mum, and brother, to know we could beat it.” Although, cancer gives patients anything but a normal life, Scott fought through all the struggles to maintain a life as close to what his family had before cancer.

After enduring a colon resection, which removed 13 centimeters, and 40 weeks of chemo, Scott was told he had “no evidence of disease” or NED in August 2017. Ironically NED in Scott’s homeland means Non Educated Delinquent which added a note of hilarity to the obvious relief back in Scotland. Scott’s amazing progress also meant he now qualified for a liver resection, a life-extending prospect which had not been in the cards at the outset, that was carried out in December 2017. Now, Scott continues fortnightly maintenance immunotherapy to help prevent recurrence.

As a stage IV patient Scott, like many others, lives “with the daily fear of recurrence.” But he has taken his experiences and turned them into a platform to help educate and advocate for colorectal cancer patients, especially those diagnosed under fifty. Over his year-long chemo cycle, Scott built a portfolio of wildlife photography and documented his triumph over Stage 4 cancer, celebrating the values – resilience, strength, love, determination, perseverance and optimism – which he says drove his survivor mindset.

Scott used his new portfolio to crowdfund a book called “Through the Window: A Photographic Tale of Cancer Recovery” – dedicated to his mother Joyce - and he donates all proceeds to the Colorectal Cancer Alliance, where he also volunteers to advocate for early onset CRC patients. He has taken advantage of all the media attention surrounding the book to spread the message that more young people are being diagnosed with colorectal cancer than ever before. Indeed, the young onset rise is so significant that the medical community has added colorectal cancer to the list of pediatric cancers.

Scott continued his advocacy in his workplace as well. With the support of his company, free CRC screening was provided for all employees at Molson Coors headquarters regardless of age. He is also working with the Colorado Cancer Coalition to show the human and economic benefits of effective employee colorectal cancer screenings. His struggles and determination are helping provide lifesaving screenings without worry of cost or the possibility of being denied testing based on age.

Scott not only reaches out on a large scale, but he is impacting people on an individual basis. “Every time someone tells me they got their colonoscopy because of my storytelling it is incredibly fulfilling. Knowing that my experience may save someone from going through the same ordeal that my fellow survivors and I went through is hugely rewarding.” From little ripples with his personal relationships and large waves through his advocacy work, Scott Wilson is working to turn the tide of colorectal cancer.