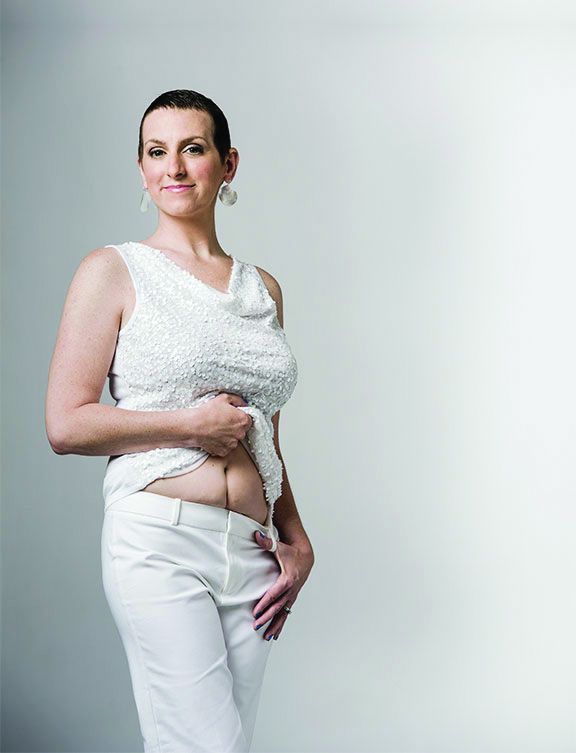 Not long after our family celebrated my daughter’s first birthday in April 2010, did my one and only symptom appear. I began to notice, sporadically and infrequently, some blood in my stool. I initially chalked it to an internal hemorrhoid, since I always heard that was one of the lovely gifts children give to their mothers. But near the end of the summer, I was seeing blood far more frequently and realized it was time to call the doctor.

I didn’t even have a family doctor. I’m never sick. I’ve never even had the flu! For about two weeks I rehearsed what I was going to say to the nurse to eloquently explain that there was blood in my poop. When I finally made the call, the nursed asked if I could come in immediately. That wasn’t the response I was expecting. How serious was this?

The family practice I visited had a rotating staff of residents. As luck would have it, the one that happened to see me that day was in his mid-thirties and pretty attractive. Now, I could talk about my kids’ poop for days, but the idea of discussing my poop was a different story. There were so many other less embarrassing things I wanted to talk about. I could feel my face get all red when I had to answer the question, “So, what brings you in today?”. We chatted about my bowels for quite some time and then discussed my family history (which is quite significant) of colon cancer. My doctor ordered a few blood tests and a colonoscopy.

Fast forward a few more weeks and my symptoms became a daily occurrence. I met with my surgeon and scheduled the colonoscopy for December 1, 2010. I was actually looking forward to it! Too many internet searches had me stressed. Based on my symptoms and relatively recent childbirth, my doctor and I were both hoping for a hemorrhoid. Boy, were we wrong!

I wake up in the recovery room and see my surgeon sitting next to me. I think her exact words were, “We found a mass blocking about 50% of your colon. We’re going to admit you.” There are two crystal clear moments in the 10 days following my colonoscopy – hearing the words, “You have a mass” and “This isn’t going to kill you, and as much as you love your husband you don’t want him raising those kids alone.” Oddly, during those first few days I never heard the words – “You have cancer”. I actually had to ask my husband if I had cancer.

The day after my colonoscopy I immediately had a colon resection. I think I was still in a state of shock, because part of me was thinking I would be home in two days tops. I had no idea (even though my surgeon and physician assistant discussed in detail the procedure) how serious an open abdominal surgery would be. Luckily, I sailed through the surgery and recovery without complication. I was also happy to have a week-long stay in the hospital to get my head in the game. This was a big deal.

I received my official diagnosis as Stage IIIB Colorectal Cancer a few days after being home. I was shocked. Stage III? Wow. I was really hoping for something with less stages. Nonetheless, it was Christmastime and we needed a Christmas tree. I needed a happy moment in the midst of my personal devastation. Straight from my appointment, my mom, my kids, and I picked up a tree and had it strapped to the car. Here’s the silver lining – I got to enjoy 6 whole weeks off of work to enjoy with my kids. Having a 1 and 4-year-old helps you keep things in perspective.

My FOLFOX chemotherapy started in January 2011. The first two rounds went pretty smoothly, with only the cold sensitivity from the Oxaliplatin being bothersome. My oncologists then added radiation to the regimen to make sure we “mopped-up” any lingering cancer cells. Within a 45-day spread I had to wear my CAD infusion pump every day while undergoing 25 radiation treatments. I was in high spirits until the last week of radiation. Every side-effect slammed me at once – diarrhea, low blood counts, nausea, and my body decided to take a nose dive and hit menopause head-on at 35 years old. When radiation was finished, regular chemotherapy resumed and just like they warned me – everything was cumulative and all of the side-effects mounted. I also developed a severe allergy to Oxaliplatin, which made days at the infusion center more exciting than my nurses would have liked. But I made it! I finished – well almost. My oncologist decided to stop my chemo after 10 rounds, instead of 12, since my body was having a hard time recovering. Nonetheless, I was thrilled to walk out of the infusion center that last day. It was a long eight months and I was happy to put it behind me.

The thrill was short-lived. A week after finishing treatment, I noticed a significant amount of blood in my stool again. I was actually on a conference call with work when I took the call from my oncologist. He told me to head straight to the emergency room. I flipped back to my conference call and told my co-workers I’d be back in a few hours. Boy, was I wrong (again!). I landed a nice weeklong stay in the hospital for a lower GI bleed. My blood counts were down and platelets were dangerously low. I was awarded with a few blood transfusions, a platelet transfusion, and another colonoscopy. I’m a lucky girl though, the bleeding stopped and I was able to make it home hours before my son started his first day of Kindergarten. All was well for about 12 months, until my routine CT scan revealed some nodules in my lung this past summer.

I thought the roller coaster ride was over, I wasn’t anticipating hopping on another coaster so soon. A few nodules in my lungs appeared to grow larger in the past few months. I consulted a thoracic surgeon for a wedge resection of my lung. This past September, it was again confirmed that I had some cancer cells still in my body and got to prefix the word “metastatic” to my colon cancer diagnosis. This time I had a whole new approach. I was prepping for the championship. I was going to win and I wanted to stack the odds in my favor. I switched primary care physicians, switched oncologists, and started to get serious. My kids, my husband, and my family needed me. I need to do this and I need to be successful. My chemo began again in November and I hope to be finished by Spring 2013. My chemo cocktail for the championship is comprised of FOLFIRI with the added benefit of Erbitux. Recent scans show fantastic results, with one tumor completely disappearing, and the other shrinking by 3mm. There is plenty to be happy about!

I’m about to celebrate my 37th birthday and I’m so incredibly thankful for being given the past 37 years. This diagnosis 20 years ago wouldn’t have given me the time I’ve been gifted. As evil as a cancer diagnosis is, there are so many benefits. You are suddenly thrust into a world where days become a commodity and you can never have enough. I absolutely live my life bigger. I’ve adopted Nike’s tag line of, “Just Do It”. We all have limited time, and sitting on the sidelines is not nearly as exciting or memorable as creating experiences. We never know our expiration date, but having cancer makes you think about it more often. Days shouldn’t be wasted on the “why me” and “what if”, you just have to focus on the positive and move on. So, I’m moving on and hoping my roller coaster ride will come to a stop.