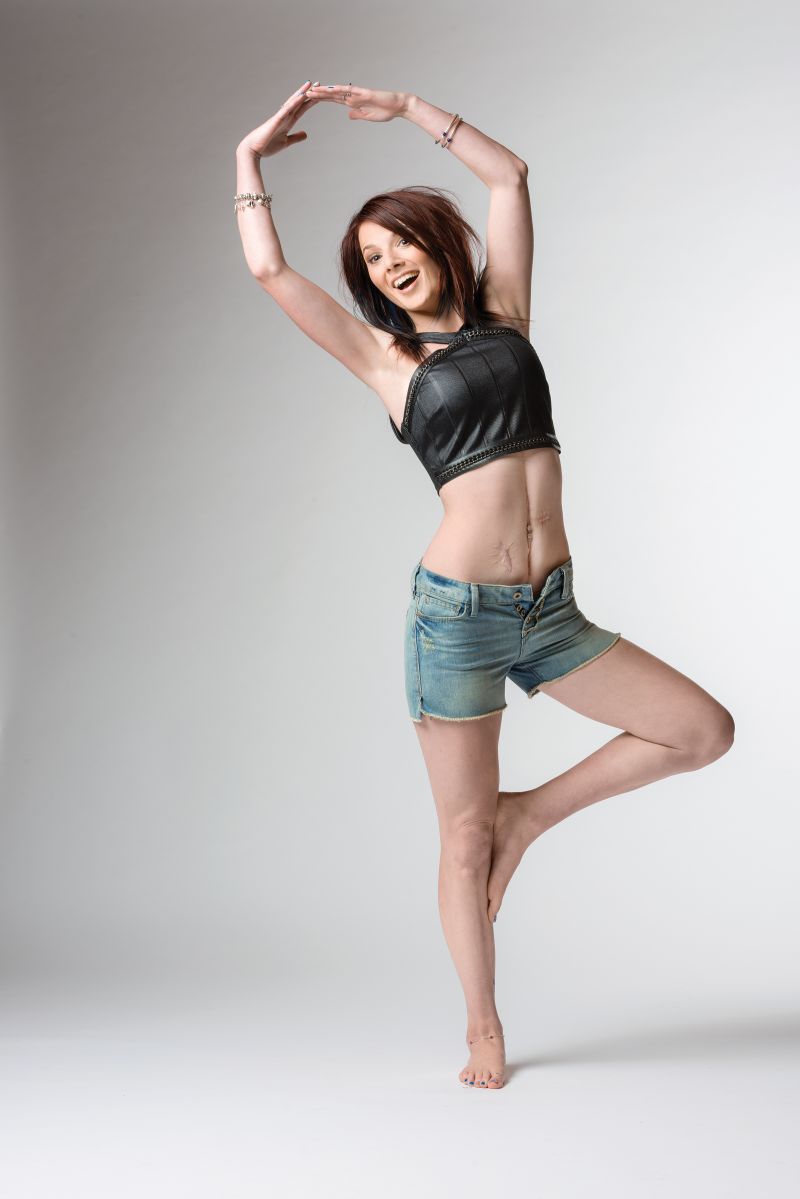 Just after diagnosis, Riley was leafing through a magazine at her doctor’s office. She found a woman’s story about going through treatment for cancer while she was pregnant. The woman even had a colostomy, like Riley did. That woman was Lindsey Bates Motley and that magazine was The Colondar (now called On the Rise). Riley couldn’t wait to get to the “and she lived happily ever after” ending and was disappointed when she read that Lindsey was still undergoing treatment. Still, Riley was encouraged. She realized that if Lindsey got through treatment while pregnant, she could too.

When a friend sent Riley an application to be a part of a magazine, she had no idea it would be for the very magazine that had inspired her. She was incredibly excited when she made the connection and couldn’t believe it when she was selected. Riley had no idea what to expect during the “colon camp” retreat, but she saw an amazing opportunity to share her story and give someone hope like Lindsey had done for her. The camp was a life-changing experience for Riley, and this firebrand is determined to pay it forward.

In January 2015, Riley was having so much pain in her abdomen she stopped eating and drinking—even though she was 17 weeks pregnant. The pain got so bad that she had to force herself to urinate. She no longer felt urges to go. When she did go, she found that her urine was bright orange.

Riley assumed that she was extremely dehydrated and went to the emergency room to get fluids. ER doctors tried a catheter and, when they couldn’t get urine from her, performed an ultrasound. It showed an odd mass.

A doctor told her it was most likely a twisted ovary or a cyst and prepared Riley for a 45-minute surgery. She woke up five hours later to her mom crying. Doctors had removed what they thought was an infection, put her on antibiotics, and gave her a colostomy. Five days later the hospitalist informed Riley that she had cancer, asked her if she had any questions, and walked out when she stared at him in shock.

At 24 years old, Riley was diagnosed with Stage IV cancer. Nothing from that point on would be easy for her, but she would repeatedly rise above her diagnosis.

Riley never asked, “Why me?” or thought, “What did I do to deserve this?” Instead, she always asked God what her purpose was. She says now, “He threw this in my lap.”

Because Riley was pregnant, there were many questions to be answered about how to treat her. Doctors presented termination as an option. They said there would be no judgment, but they also admitted it would not alter her odds of survival or the course of her treatment.

“If I was meant to have the baby, God will get us through this together,” Riley told them. With that, she was transferred to a larger hospital in Lubbock, TX for treatment. Her small-town hospital was not prepared to treat a pregnant woman with cancer.

GETTING THROUGH AND FEELING BLESSED

After four rounds of FOLFOX chemotherapy, Riley had two seizures due to eclampsia. She was air-lifted to the hospital, where she had a healthy baby girl named Bryelle. Next, Riley’s chemo cocktail was changed to FOLFOXIRI and the easier side effects that she’d had on FOLFOX became a nightmare. Soon, she was essentially bedridden. Once again, had to adapt and find her “new normal.”

James (her then-boyfriend-now-husband and Bryelle’s father) stepped up as the sole caregiver for both Riley and Bryelle. If he had to leave, Riley would lay on the floor with her daughter, changing her diaper and feeding her until James got back, barely able to handle Bryelle’s most basic needs. She would not allow herself to take anti-nausea pills because she was afraid she wouldn’t wake up if Bryelle needed her. Thankfully, it was as if Bryelle knew her mama was not feeling well. She would often just curl up and snuggle.

Eventually Riley got through chemo and underwent truly the mother of all surgeries. Surgeons removed the tumors, as well as her appendix, ovaries, uterus, gallbladder, omentum, and more large intestine. They also reversed the colostomy, gave her a temporary ileostomy, and performed the HIPEC procedure.

Recovery was lengthy and incredibly difficult. Since then she has had a reversal surgery for the ileostomy and has scans every three months. She continues to overcome the hurdles that have been in her path with scans showing no evidence of disease. Riley feels truly blessed to be here today. She hopes her story will give others hope.

“As difficult as this has been, I’m thankful for all the good that has come of it,” Riley says. “My daughter, Bryelle, is at the top of that list.”