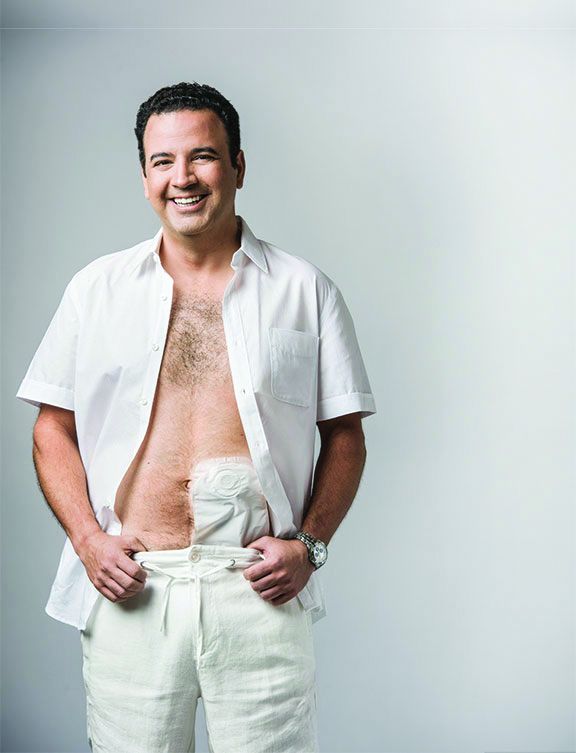 I was diagnosed with Stage IV Colorectal Cancer in April 2011. I was 40 years old and the news devastated me. I lost both my father and grandfather to cancer, so my diagnosis really sent me into a real emotional hole. I had no idea what I was going to face but I knew I was in a very serious situation. I was angry and scared.

Before my diagnosis, I lived a fairly active life. I played soccer and was involved in competitive cycling since the age of 14. I’ve really never had any major health problems, and I have lived a reasonably healthy lifestyle. As I got older, I got more serious about my own health, keeping my family’s medical history always in the back of my mind. In the Fall of 2010, everything seemed to come unraveled.

It started with very small signs. Cramps and pains, which could have been blamed on anything, soon became a major problem by the end of that December. After finally getting myself checked out, a colonoscopy would later confirm that I had a grapefruit sized tumor in my colon. We discussed the various options and the best course the doctors could give me was to begin radiation and chemotherapy immediately. The idea behind this was to shrink the tumor before undergoing surgery. This was also when I first heard of the term colostomy.

The surgeon described the procedure and what a colostomy involved and my heart just sank. I realized then that if I made it through the entire cancer experience, my life would still never be the same. This first week was probably the lowest point of the entire experience for me emotionally. I was extremely fortunate to have my sister, who happens to be a nurse, with me during all my appointments and exams. She helped make sense of everything and got me focused on what needed to be done. I spent hours online looking up information about my condition and to get a better idea about how to deal with my situation. This was about the time where I discovered The Colon Club website. On the site, I found stories that soon became a source of hope and inspiration. I realized that my life wasn’t over and that I could live a normal life once again. I now had a goal, and now it was time to make it happen!

I started on chemotherapy and radiation right away every day for the next three months. After that, came the actual procedure that would remove the tumor itself. The procedure would also leave me with a permanent ostomy. The choice to have the ostomy was my own. It ended up being the best option to ensure that they are able to get all the cancerous tissue and reduce the likelihood of having the cancer return. I figured I was still young, and that it would be best to do whatever I could to reduce the chances of this happening again. Chemo and radiation wasn’t fun, but I had no idea what I was in for in the months to come.

My surgery took place at the end of July after my first round of treatments. The weeks following surgery were the hardest for me physically. I really wasn’t prepared for how bad I would feel afterwards. I started to get a little discouraged but I found that setting small goals for myself, and taking things one day at a time helped keep my spirits up. The goals seemed pretty sad at first, like get out of bed on my own or make it to the restroom on my own, nothing really to brag about. I had been losing a lot of weight and by this time I was getting way too thin. I had gone from 210 pounds in April to 140 pounds by August. My clothes hung on my body and I would begin to shake if I stood on my own for longer than a few moments. Eventually, I felt my body really turned a corner when my craving for cheeseburgers and cherry cokes came back.

All this time I was at home recovering; I would stare at my bicycles that I had hanging on the wall. I would carry pillows around the house to sit on because of the pain and I couldn’t imagine ever sitting on a bicycle seat again. I missed getting out on the road and it killed me to just see them hanging there week after week. Three weeks after my surgery, we began getting ready for another round of chemo. Tests showed that the cancer had begun to spread to the rest of my body so the doctor advised that I begin chemotherapy as soon as possible. This round of chemo would run through the rest of the year and into January 2012.

The treatment was different from the first-round I had completed earlier, and was worse by far as far as side effects. I did my best to make the best of it and did what I could to make the time pass as quickly as possible. I was also healing up from my surgery; enough to the point where sitting on a bicycle seat might be possibly be bearable. And finally, on a good day, I decided to get my gear on and go out for a short ride. By then it was already October, the pain was terrible but I couldn’t stand sitting inside anymore. I figured I would rather be miserable outside in the fresh air than being miserable indoors and going nuts.

Getting back on the bike was “the game changer” for me. I felt my body getting stronger each day and the pain seemed to become less and less. I was still in the middle of my chemo treatments but riding gave me something to look forward to and really helped me deal with what was going in my new life. Three days after my last chemo treatment and less than six months after surgery, I entered my first race since the whole thing started. I didn’t do well, but I finished. Since then, I’ve gotten stronger and eventually fitter than I ever was before. The whole experience has changed my entire outlook on life and I can honestly say I’m not the same person I was before. I’ve been cancer-free for about a year-and-a-half now and I am grateful for all the love and support I got from family and friends. I am grateful someone took the time to share their story with “me” when I needed it, and now I can only hope that I can pay that forward for someone else. To those going through what I went through I would say, “Keep your head up! Take it one day at a time… and celebrate every victory no matter how small it may seem.”