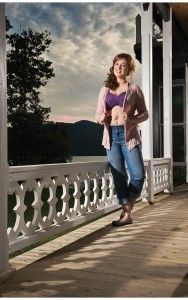 My cancer journey started long before my diagnosis. I was 17 and a senior in high school when I started having symptoms. In January 2004 I began having rectal bleeding on a daily basis and random bouts of abdominal pain, especially when I ate. Not too long after it began I had my first colonoscopy but the results came back unremarkable and the doctor told me it was probably “just a tear”. But over the next 8 months it progressed and didn’t get any better so I saw another doctor, and another doctor, and another doctor. I had blood tests and physicals but no one found anything. Since I had just had a colonoscopy no one else wanted to do another one. No one thought an 18 year old could have something like colon cancer.

After being called a hypochondriac by almost every doctor I saw I decided to stop going and try to figure out on my own what was wrong with me. I thought maybe I had food allergies like my mom so I started eating healthier and I saw some improvement. That was encouraging and helped me continue the diet, even if I didn’t stick to it like I should have. But to this day I believe that diet (along with God of course) is what kept me alive for so long. I honestly believe that had I not been careful of what I ate my colon would have ruptured before they ever found the cancer. I followed that diet (loosely though) for 3 years.

In February 2008 I saw a startling change in my condition almost overnight. My symptoms got much worse and I was having a hard time functioning… I slept sometimes 18 hours a day and I never felt awake. When I was at work I could hardly go an hour without rushing to the restroom. I was lethargic and almost comatose and I know my performance was terrible. And the pain increased considerably that month… my abdomen hurt severely every time I ate anything, even if it was all natural and healthy for me. It was that month that I realized I had cancer. I just had to make other people realize it too. In April I was finally able to get health insurance but I had to wait for the waiting period to expire. May proved to be another turning point in my disease. I stopped going to the bathroom that month. The only thing that could pass was large blood clots. I could literally feel my body dying. No one wanted to believe me that it was cancer. But I knew it was. God began preparing me in February for that diagnosis and He gave me an indescribable peace about it.

My doctor’s appointment was scheduled for the second week of July. So what does one do when she knows she is about to be diagnosed with cancer and start the battle of a lifetime? She goes whitewater kayaking. The first week of July I took a trip to North Carolina so that I could go down the Nantahala River in a ducky for the first time (something I had always wanted to do). It was an amazing experience and has become somewhat of a tradition now. But when I got home from the trip reality was awaiting me. I finally saw the doctor and was put off by his rude manner… he laughed at me when I suggested it might be cancer and he was uninterested in hearing any of my symptoms. But he agreed to do the colonoscopy even though he “knew” it was ulcerative colitis.

I remember the procedure day vividly. After it was over I remember lying in the bed trying to wake up to find out how it went. My hearing always is the first thing to come back after anesthesia so I can hear people even when they don’t think I’m awake. The first thing I heard was the doctor saying he was unable to finish the procedure. I immediately knew that he had found something. I forced myself to open my eyes and when I did the nurse was standing there. I asked her if he found anything. She responded that she would rather my mom tell me. That was confirmation enough. I asked if it was cancer. She just repeated that it would be better for my mom to talk to me about it. I knew if it was cancer my mom couldn’t handle that so I asked her not to bring my mom in but I did want to talk to the doctor. Not too long after that the doctor came in with my mom. I could tell on her face it was bad. I asked him if it was cancer. He just nodded, his face was as white as a ghost. I asked if it was bad, and he said yes. I said “ok, then what’s next, what do we do?” He said he was sending me straight up to see the surgeon and he hoped to have me in surgery by the end of the day. That’s when I knew it was bad… it is not usual to operate on a cancer patient immediately. But he said that if I waited a week my colon could rupture and I could die… it was 99% blocked.

After seeing the surgeon I decided I wasn’t comfortable with their plan. They weren’t even going to do a CT scan or anything before surgery… they were just going to go in and figure out where the tumor was and cut it out. Sorry, but that didn’t seem very smart to me. So I started trying to get into a specialty center. I called MD Anderson, Cancer Centers of America, and the Mayo Clinic. No one would take me because I had to be operated on immediately which gave me no time to go through all of their red tape. My last option was Johns Hopkins in Baltimore, MD… not that it was my last choice but I just didn’t know that much about it. But God’s hand was on me the whole time because I ended up exactly where I needed to be. I called on a Friday and they had me in on Monday. I stopped eating so that I could wait two weeks for surgery without my colon rupturing. When I met my surgeon I knew I had made the right decision to wait. He listened to my symptoms, heard my concerns, and discussed my options with me… I had never had a doctor treat me so kindly before! I trusted him immediately. Then he told me that he thought I had a genetic condition called Lynch Syndrome so he wanted me to go see a geneticist… the geneticist confirmed his diagnosis. I had Lynch Syndrome, a genetic mutation of the repair gene that predisposes people to specific cancers, colon cancer being the most common, and usually at early ages. That finding changed my surgery plan… instead of just removing the tumor I chose to have a total colectomy as a preventative measure.

Almost exactly two weeks after my diagnosis I went in for my first surgery. It went well, until about 18 hours later. My body began to go into acidosis and my organs started shutting down… I had to be rushed back for emergency surgery. They ended up doing a temporary ileostomy as a precaution because they weren’t sure what was wrong. I recovered for eight weeks and then returned to have the ileostomy reversed. It went well and I soon went back home to Alabama to recover. About 3 weeks later I went to the doctor because I had a fever and was vomiting. I was loosing weight drastically (down to about 115 lbs… I was 170lbs prior to my first surgery) and I could just tell something was wrong. It’s always good to listen to your gut… we know our bodies better than anyone else! It turns out I had an abscess on my liver (also a strep infection). I was admitted to the hospital and they had to drain my liver (WORST procedure ever!!! A long needle in your liver with NO anesthesia= pain). During the procedure the needle went a little too high and the infection spread to my lung cavity. I then had to have my lungs drained, which didn’t work, so then I had to have lung surgery. My first surgery was August 6th and my last was November 10th, all in 2008. My pic line was removed the week before Christmas and after that I began pursuing life again.

I have had struggles associated with the surgeries… Chronic Pancreatitis has been a side effect I’ve been dealing with as of this past May 2010 after a week stay in the hospital from an episode. I also struggle with nutrition absorption. I was told I would battle weight loss but instead have been fighting weight gain. But overall I am healthier and living a better life now. I have been in remission since that first surgery (August 6, 2008)… I ended up being a Stage II with no lymph node involvement. I praise God for it every day.

A year after my diagnosis I was back in North Carolina whitewater kayaking in a ducky again, trying to prove that I still had it in me. I have made kayaking a tradition…every summer my plan is to kayak in order to celebrate still being here. I try to do it for the anniversary of my diagnosis (July 18, 2008) and not my remission anniversary because I see that as telling my diagnosis date that I kicked its butt For the anniversary of my remission I always try to go to dinner with those that I love. This past summer my kayaking experience was in a “true” kayak in the Colorado River with an organization called First Descents (FD). FD hosts free camps for cancer patients and cancer survivors in order to use outdoor sports (mainly kayaking and rock climbing) as a means of emotional therapy. And let me tell you, it works. I emerged from that camp a better person. I also came to know myself better… FD taught me who I had become after cancer, something I had been trying to figure out for a long time.

In the end, after it all, I wouldn’t change a thing. Yes it sucked having cancer, yes the pain was terrible, yes it emotionally wiped me out, but it was an experience I will never forget and it changed me for the better. I think everyone has a moment in their lives where they are given the opportunity to utilize change to form them into better people and this was my moment. For some it’s losing a family member or a friend, for some it’s a car accident, for others it’s a life threatening disease… for me it was cancer. I thank God every day for the opportunity to learn the things I did and meet the people I met. I can honestly say that as terrible as cancer was, my life is better today because of it.