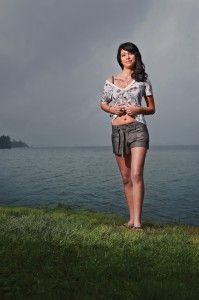 My story begins back in January of 2009.  I scheduled a doctor’s appointment with my primary care physician because I had a few fainting episodes, a lot of unexplained stomach cramping, and was not feeling well overall.  My physician could not find anything significantly wrong, but did tell me that I was slightly anemic.  I made three more return visits to my primary care physician, not satisfied with what he had initially said – I knew that there was something wrong.  After the third visit in April 2009, he gave me the number to a Gastroenterologist to schedule an Endoscopy.  When I got the results back from the endoscopy, the results were normal but the gastroenterologist recommended that I get a colonoscopy.  At the age of 20, I felt that I was way too young to need to have a colonoscopy and I declined to have the procedure.

It was now August 2009, I was working at my summer job at a local restaurant while I was home from college.  I remember one day in particular I began to feel really sick.  I started to feel really warm and dizzy.  I kept feeling like I had to use the bathroom but nothing happened, I thought maybe I was just constipated.  I had shooting pains in my stomach and thought that I should probably ask my manager if I could go home early.  Instead, I just dismissed my symptoms and decided to “tough it out” for the rest of my shift.

At the end of August 2009, I returned to my primary care physician to have a check-up before returning back to school for my senior year of college.  I complained of my stomach pains and my doctor said that I probably just had Irritable Bowel Syndrome, since it is common in girls my age. When I returned to school in September 2009, the stomach cramps got increasingly worse and happened more frequently.  There were nights when I was in so much pain all I could do was just lay in my bed, not even able to sit up to do my homework.  It felt like someone was grabbing a hold of my stomach and wringing it out like a wet towel.  My roommate would offer to bring me to the Emergency Room, but I didn’t think it was anything serious and felt stupid to go to the ER for stomach cramps.

One day in October 2009, the pain became unbearable.  I had gone to class that day and it was impossible to sit still because the pain was so uncomfortable.  After class, I went to Health Services on campus to see if they could explain what these stomach pains were.  They came to the same conclusion as my primary care physician, they told me I just had Irritable Bowel Syndrome (IBS) and that there isn’t much you can do to change it except by trying to improve your diet.

I crawled into bed as soon as I got back to my apartment that afternoon.  No matter what position I was laying in, the pain would not stop or lessen.  I called my Mom and told her how awful I felt.  She knew just by the sound of my voice that I was not okay, and she decided to drive out to my apartment and take me to the Emergency Room.  I knew that this was a big deal because my Mom lives about an hour and a half from where I was living at the time.

We finally got to the hospital and waited for what seemed like forever for someone to finally see me.  They did a blood test and discovered that I was extremely anemic and needed to give me 3 units of blood.  They also performed a rectal exam and found that there was blood in my stool.  After that, they performed a CT-scan and found a stricture in my descending colon.  They admitted me to the hospital.

During the week I was in the hospital, they attempted 2 colonoscopies, but could not get past the stricture.  At this point they told me that I had Crohn’s disease.  I was terrified because this is a lifelong disease which would require me to take as many as 17 pills a day! They took a tissue sample when they had performed the partial colonoscopy.  When the biopsy results came back, I was told that I had colon cancer.  My mom and I just looked at each other and started sobbing.  Cancer? At age 21? How was this possible?  I was in shock.  My mind starting racing.  I have no history of colorectal cancer in my family.  I started to wonder how long have I had this?  How long did it take to develop? And most importantly, how did my primary care physician dismiss my symptoms as if nothing was wrong?

They discharged me from the hospital the following day and immediately set up an appointment with the Chief Oncology Surgeon at UMass Memorial Medical Center in Worcester, Massachusetts.  As soon as the surgeon saw the pictures that were taken from my attempted colonoscopies and the pathology report, he admitted me to the hospital and scheduled me to go in for surgery the next morning.

At this point I was aware of how urgent the situation had become.  That morning they took me away to begin my laparoscopic left colostomy.  The surgery lasted about 6 hours.  The surgeon removed 12 inches of my descending colon and 40 lymph nodes.  The pathology showed that my cancer was stage 3.  The surgeon referred me to an oncologist whose specialty is colorectal cancer.  I was told that I would need to undergo 6 months of chemotherapy treatment.  They recommended that I get a port installed to make the chemotherapy process a bit easier.  My chemotherapy regimen included 5-FU, Leucovorin, and Oxaliplatin.  The first few rounds of chemotherapy were horrendous.  I have a difficult time swallowing pills, so it was nearly impossible to swallow the pills for the nausea.  Thankfully I was informed about a nausea patch called Sancuso that I would apply the day prior to receiving chemotherapy.  The patch worked wonders, and kept me from feeling nauseous.  The worst side effect from the chemotherapy for me was the sensitivity to cold.  I wasn’t able to drink anything cold, touch anything cold, and it was extremely difficult to breathe in cold air The other side effect that bothered me was the neuropathy I experienced in my hands and feet.  I am thankful that although I did lose a significant amount of hair, I didn’t lose all of it.  One of the most challenging parts of going to the treatment room for chemo was the fact that I was ALWAYS without a doubt the youngest person there.  Many of the patients would ask how old I was or tell me how I didn’t belong there because I was so young.  The only thing that made the chemo treatments manageable was having a family member or friend sitting there along with me.  I am very grateful that I didn’t ever have to go alone.

I finished my chemotherapy treatments at the end of June 2010.  I have since had a clear colonoscopy and CT-scan.  Instead of graduating from college as scheduled in May 2010 with the rest of my graduating class, I graduated a few months later in August I am happy to say that I am cancer-free and am beginning to live a normal life of a 20-something year old.