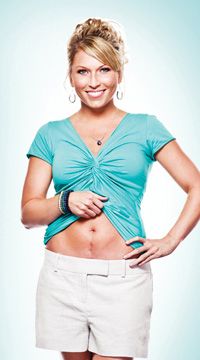 In mid-March 2008 I began to experience an unusual cramping pain on the left side of my abdomen.  I had always had what I called a sensitive stomach, but I had never experienced aching like this before. At first the pain was slight and sporadic, but as time passed it became more intense and constant.  I had no idea what was causing the pain, but I just hoped it would go away. It didn’t. The pain intensified over the weekend and by Monday morning I went to see a family physician. The doctor urged me to see a gastroenterologist right away so a colonoscopy could be performed. He explained that there could be an infection in my intestines or some sort of inflammation but that it really needed to be examined more closely. He also ran tests and found signs of blood in my large intestine. The doctor seemed very concerned as he discussed the details with me. I left the office in tears because I was so worried about the whole situation. Later that week I went in for my first colonoscopy. Although at this point, I was sure there was something wrong, it just never really occurred to me that it might actually be cancer. I was only 29 years old, in great shape and had no cancer history in my family.  After waking from the anesthesia given for the procedure, I was told that a mass was found and that it was indeed cancerous. My worst fear had come true. The doctor began explaining how they were performing a biopsy, that I would need a CT scan and they would schedule surgery as soon as possible. I didn’t really hear anything after the word cancer. The panic and fear that I felt was crushing. I was certain I was dying. The next few days were just a blur. I literally stared off at nothing for hours a day as my mind raced with worry and fear. My phone was ringing off the hook. Friends and family had heard of the diagnosis and were calling to check on me. I couldn’t bear to go through the story over and over, so I mostly just kept to myself. It was too much. It took days for me to wrap my mind around my diagnosis.  From that point I decided to take it one day at a time, accept the news, learn as much as I could about options and try to make the best decisions possible.  I had my first CT scan on a Friday and then met with my surgeon on the following Monday for the results. The results would give me some idea of what stage my cancer was and whether it had spread to any other tissues or organs. I am certain the fear I felt walking into that meeting and hearing those results was the worst fear I have ever felt.  I had prepared myself for the worst. Thankfully I got good news as my surgeon informed me that from the scan results, it did not appear that my cancer had spread outside of the intestinal wall. Of course, further testing would be needed to know for sure, but the relief I felt from hearing those results was simply incredible. I could finally breathe.

My colon resection surgery was performed on April 3rd, and six inches of my sigmoid colon, appendix and 36 lymph nodes were removed. A few days later after further testing I was officially diagnosed with Stage II colon cancer.  Recovery from the surgery was much more difficult than I anticipated. Not only was the physical pain severe but the emotional stress along with it was just as devastating.  I couldn’t do anything for myself. Walking even ten feet left me completely out of breath. I hated being so dependent on others. Thankfully my friends and family were there to help me through. I couldn’t have done it without them.

I met with my oncologist while in the hospital and decided to do the recommended Folfox chemotherapy regime. My second surgery for my port implant was quickly scheduled and before long the chemotherapy began. That summer was filled with biweekly chemotherapy treatments, numerous trips to the cancer clinic, and many prescription drugs used to counteract the harsh side effects from the treatment. I was incredibly sick and tired for months. The chemotherapy was so hard and left me so weak. Feeling sick for such a long time at such a young age really does a number on your mental well-being. At times I really felt as if I was going crazy. All the medicine running through my body and all the worry and stress was just horrible. But I knew this was the biggest test of my life and I had to find the strength to continue. When I finally finished the chemotherapy and had another clean scan, I felt like I had climbed a mountain. It was such a great feeling to feel like me again and to know I had fought as hard as I could. Since then, I have had nothing but good results and have been cancer free ever since.