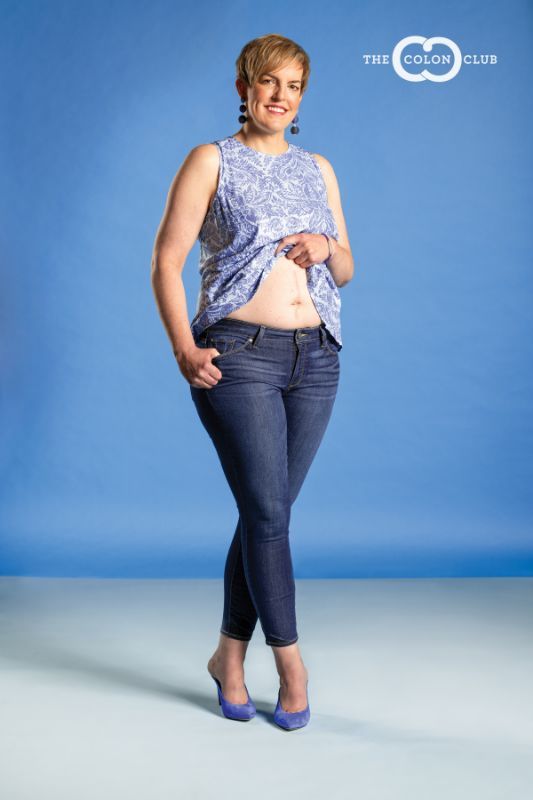 In 2015, Meredith faced the typical struggles of balancing a demanding career and parenthood. Feeling the pressure of high expectations at both work and home, Meredith easily brushed off her exhaustion, upset stomach, skin irritation, and depression. While the blood in her stool was worrisome, she was more concerned about the urinary incontinence she experienced when she ran. She saw a urinary gynecologist, who sent her to a colorectal clinic after Meredith indicated that she had blood in her stool. A colonoscopy was scheduled that fall. At the appointment, the doctor patted her foot before the procedure and said, “I’m sure it is just hemorrhoids.” Results from her colonoscopy and CT scan shocked everyone, including her doctor. It showed that she had Stage IV colon cancer at the age of 41. A plum-sized tumor on her colon as well as some on her liver and abdominal lymph nodes were confirmed after two different scans.

Meredith chose to focus on fighting her cancer anyway she could. In addition to the standard treatment of twelve rounds of FOLFOX, she integrated recommendations from her naturopath, including acupuncture, supplements, massage, and diet. The tumors on her liver had shrunk, and the plan was to have both the colon and liver resections done in one procedure. Surgery went well, but recovery didn’t. What should have been a week of recovery turned into three weeks. Meredith’s parents came to stay to help her with recovery after the surgery.

Unfortunately, cancer was quick to return three months later with tumors growing in her lymph nodes in the tissue between her lungs. Determined, Meredith chose to attack her cancer with a vengeance. She bought books, tried new diets, began meditating, and made an effort to surround herself with the positive influence of family and friends. Meredith was told about a new clinical trial, and she decided to move forward with it.

Meredith started the trial in September 2016. Despite her fears of the clinical trial, she tried to maintain normalcy in her life for her daughters by taking care of them and spending quality time together. Knowing she still needed to work on herself, Meredith continued seeing her naturopath and a therapist. Unfortunately, one of the trial drugs lowered her platelets, so she is currently on two trial drugs and receives scans every two months.

Around this time, Meredith recalls feeling as though something was missing from her life and began to wonder, “Who are you Meredith?” She recognized how her mother, a breast cancer survivor, was healed by religion. She started going back to church and received more inspiration to find herself through the support of her sorority sisters. They shared her passion for running and proved to her what the real meaning of their sisterhood was.

As her self-exploration continued, Meredith discovered a group called A Fresh Chapter, which is a volunteer program that explores life beyond cancer. She and her sister were able to travel to Africa through the program. While there, Meredith had the most pivotal moment of her life, essentially leaving her insecure self in Africa. She decided in that moment to live an authentic, genuine life for herself and for her daughters. She was done feeling sorry or guilty for having cancer. She began to see it as a journey instead of a battle.

Nowadays, Meredith takes full advantage of any opportunity that comes her way. She embraces the simple joys of life with her daughters and running the coast of Oregon with her sorority sisters a few times a year. Wanting to live her life in a more positive way and recognizing the tribe of supportive people in her life, Meredith had finally taken the time to find herself.

UPDATE:  We are sad to share that Meredith passed away on September 14, 2019.