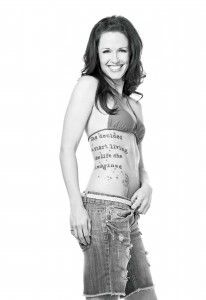 I blame my Grandpa Lester

I blame my Grandpa Lester for my faulty colon. I sometimes picture the conversation I would have with him if he were alive today. He’d be sitting on his couch with his arms folded across his chest. He wouldn’t say a word, just smirk at me as he usually did.  I’d tell him all about what happened to me, and how all my dignity flew out the door when my young, 26 year-old butt was exposed to some of the most devastatingly handsome medical professionals around.  Sadly, that conversation was 2 1⁄2 years too late, he succumbed to cancer in 2007.

There were many signs and symptoms that I had missed through the years that I had chalked up to bad genetics and a bad diet. The earliest memory I have was November of 2002.  I was sitting at my cubicle working at my desk job when I was hit with a sharp, knot-like pain in my stomach and nausea that came out of nowhere. I ran to the bathroom to throw-up, and when I sat down to void, I had drops of fresh blood in the toilet. I went home to sleep it off with some Tylenol and a heat pack and that seemed to help.

I would drive myself to the emergency room

When I found out I was pregnant in 2005 with my first daughter, Savannah, I noticed blood in my stools. I also noticed that I was losing weight when I was supposed to be gaining. My face looked gaunt and pale, I just looked unhealthy.  I contributed this to my baby taking all my nutrients and those joyous hemorrhoids pregnancy tends to plague a woman’s body with. It wasn’t until after I had Savannah (my daughter) that the stomach pains began to kick in more frequently than before. I noticed that I wouldn’t have a bowel movement for a few days, my abdomen would distend, the pain would be debilitating and I couldn’t eat. They became so bad, I ended up driving myself to the Emergency Room at the nearby hospital every few months. Each hospital trip would end up a waste of time. In spite of my family history, as well as my symptoms, my pains were attributed to constipation. I was sent home from the hospital with Percocet and some high fiber diet education. 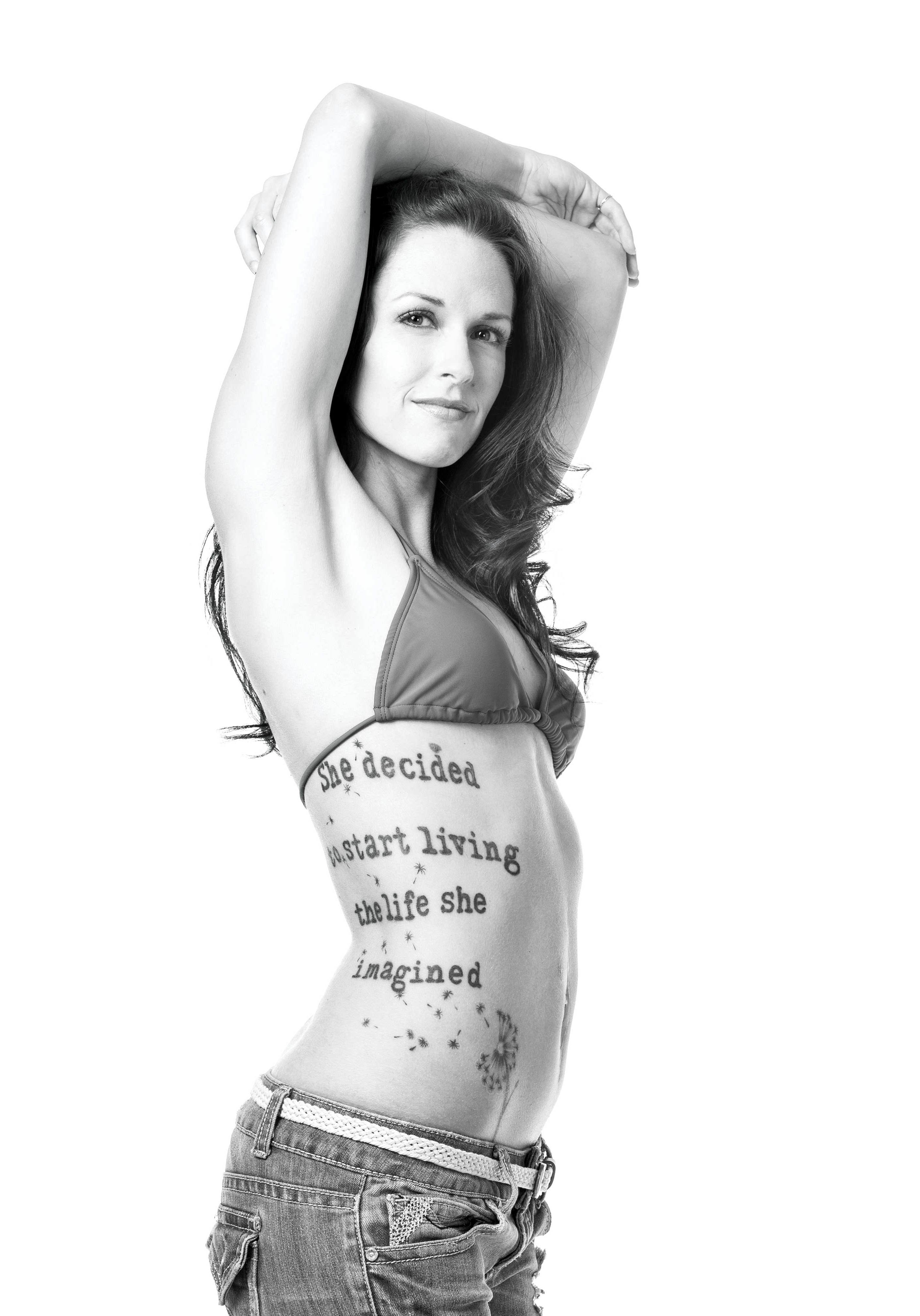 After I had my youngest daughter, Ava, in 2007 I went to see a specialist to have my hemorrhoids removed in hopes to stop the blood that was constantly in my stools. That helped the situation for a few weeks, until another episode of pain came on and I drove to the Emergency Room again. This time, the doctor discovered my appendix was slightly inflamed. I was admitted for an appendectomy and released 24 hours later.

Within a few weeks I was experiencing the same pain. The blood in my stools was still frank, and without altering my diet I was still unable to put on weight. On August 3rd, 2009 at about 1:00 am, I was woken up with another onset of pain. This time I noticed that as my abdomen tightened with the cramping, I could see my ascending colon swelling up. I was only distended on the right side of my abdomen with each cramp. This was the first time I had noticed it, and it was very scary. I took some ibuprofen and drove myself to an Urgent Care when it opened.  The Physician’s Assistant took one look at my abdomen as it cramped and distended, and told me to go straight to the Emergency Room with a call-ahead from himself.

CT shows something abnormal in my large intestine

I decided to drive the extra 5 miles to a different, larger hospital than I had attended before. After a CT scan of my abdomen, the Physician’s Assistant looked at the results and noticed something abnormal in my large intestine. My ascending colon was distended with air, and my descending colon was compacted. She consulted with a General Surgeon who was in-house that day, I was informed of the abnormality they saw and recommended admission and further testing. I called my parents, and they both made arrangements to come out to be with me.

The next day I had a barium enema, then a colonoscopy the following day. The GI specialist who performed the colonoscopy came to my room while both of my parents were with me. He informed me that he saw a 7 cm wide mass in my transverse colon. I wasn’t sure why at the time, but he delivered the news without expression or sensitivity.

It was a giant blow, my parents were crying, I remember feeling the room spinning. The surgeon from the ER came later that day and recommended surgical intervention to remove the mass and a consult with Oncology. The surgery was going to consist of a transverse colon resection, with a possible ostomy placement. When my new Oncologist came to talk to me, he told my parents of the treatments that may lie ahead of me based on the size and location and location of the mass.

My daughters were brought to the hospital to see me.  The moment I saw them, so small and confused about what was going on around them, I lost it. Their clothes were mismatched, they were wearing the wrong-sized shoes and their hair was unkempt and messy. I couldn’t let go of the agonizing thought that my little girls might lose their mother before they were old enough to remember me.

The next day I had the surgery, and fortunately an ostomy was not necessary. The surgery was on a Thursday, and the results of the biopsied mass would not come in until Monday at the earliest. I spent the weekend coping with the pain from my incision, and trying to wrap my head around any and all possible outcomes as I waited for the results. It was the scariest time of my life. I didn’t want my daughters to come to the hospital, because it was too much.  I was waiting for placement in a nursing program, and had been waiting for over a year at this point, and was heartbroken to think I wasn’t going to be able to finish college. I was struggling with how far away I was from my family in California and how much I needed their support once I was discharged.

On Monday, my Oncologist came to deliver the results to myself and my parents. To his surprise, the mass was a Stage I malignant neoplasm of the sigmoid colon. The mass was so large, he was a certain that it had at least perforated the intestinal wall. By some odd grace or luck, the mass grew into the lumen, instead of into the wall and the surrounding tissues. There was no need for further treatment, including radiation and chemo. The plan was for regular follow-ups, blood work, and colonoscopies. With that information, I was scheduled to be discharged home the next day with a follow-up colonoscopy within 6 months.

Moving on with my life

The transition home was more difficult than being in the hospital. My parents went home within a few days after my discharge, my (former) husband carried on with life as he usually did, going to work and taking care of himself. I relied on the charity and good-will of my friends to help me with taking care of my home and my kids while my incision healed. Many changes came my way; some were hard and others were a true blessing.

I asked my Oncologist for a picture of the tumor…I have a sick sense of humor, and kind of wanted it framed. I had named the tumor “Abdul” after my least favorite nurse on the Med-Surg floor I stayed on. Every year on August 3rd, I celebrate a new year of life by savoring time with my little girls and remembering that Mommy killed Abdul.

Life as a colon cancer survivor

Within 6 weeks of coming home, and after 2 years of waiting, I was accepted into a Nursing program beginning the following spring. I met the love of my life, Gabe while finishing my program. I graduated Nursing School two years to the day of my diagnosis, and I am now working as a Registered Nurse and currently working on my BSN and looking toward graduate school. My daughters are now the happiest they’ve ever been, and they have had more opportunities, excitement, and a better, happier, healthier mother.

The December following my surgery, I went to see the same GI specialist that had performed my colonoscopy in the hospital. When he came into my room, he sat down as he flipped through my chart and he became teary eyed. He told me that I had haunted his thoughts since that day in the hospital. He recounted the visit with detail. He remembered this young woman, mother of two little girls, about to start school, and a very large, deadly looking mass growing inside her belly. He left the hospital that day believing that I was a dead woman. Seeing me months later, healthy, cancer-free, and sitting in his office was a shock. In his own words, he said, “Somebody in heaven must be looking out for you, I look at you and see a miracle.” I guess I should give Grandpa Lester some slack.