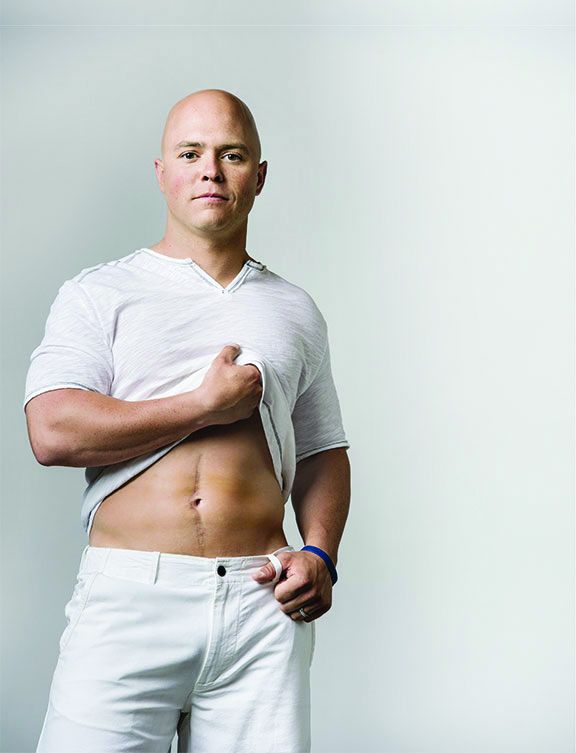 I was born in Cisco, TX. I grew up in this small town surrounded by close family and friends. The first time I ventured out of Cisco was to head to college. I lived in College Station, TX and commuted to Sam Houston State University to earn my Bachelor’s degree in Criminal Justice. While in college I worked as a bartender and met my wife, Beth.

Once I graduated, it took a while for me to find a job as police officer as the application process is very long. While in transition from college to my career, I enlisted in the US Army Reserves to serve my country. I have served in the US Army Reserves since 2008. My current Army Unit just recently deployed to Afghanistan. I was not able to go with them because my cancer appointments interfered with the deployment.

I became a police officer for the City of Deer Park, TX in 2009. Shortly thereafter I married my wife, Beth, and we moved to Pearland, TX. She is a high school English teacher and basketball coach.

My father was diagnosed with Stage I Colon Cancer in December of 2009, and had surgery in January 2010. He was also diagnosed with MLH1 gene mutation, giving him Lynch Syndrome. After surgery, he was given the all-clear, and scheduled regular follow-up appointments at MD Anderson with our doctor, Dr. You.

In October 2010, I began to have persistent, regular stomach pain. I went to my family practitioner three times before deciding to see a gastroenterologist. Since my father had been a patient at MD Anderson and had been diagnosed with Lynch Syndrome, I knew that MD Anderson was where I needed to be. I scheduled a preventative appointment for a colonoscopy in June. My colonoscopy was June 17, 2011, and that was a day that I will never forget.

I had surgery to remove the portion of my colon where my tumor was on June 30, 2011. I also had many lymph nodes removed, as my doctor told me there was lymph node involvement. I began chemotherapy in the beginning of August 2011. Every other weekend I was at MD Anderson receiving my FOLFOX treatment. While on chemotherapy, I was not able to patrol the streets as a regular patrolman for Deer Park. I was able to continue working in the Evidence department while going through chemo. I also did not attend any Army activities during my 6 months of chemotherapy.

My last and final chemotherapy treatment was on January 14, 2012. Shortly thereafter, my friends and family started a “Team Mason” for the SCOPE 5K run put on to raise awareness for colorectal cancer by MD Anderson.

I have had regular checkups involving a colonoscopy, blood work, and CT Scans since then to ensure that I am and remain healthy. For my one year anniversary, my wife threw me a “Screw Cancer” surprise party and gathered all of my closest friends and family from in and out of town to celebrate the milestone.