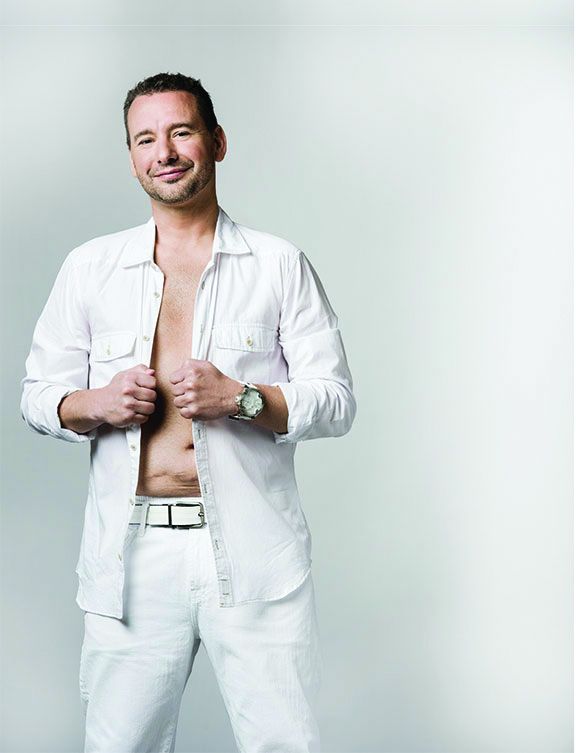 I was living what I thought to be the normal life of a 33-year-old man. I was married for almost three years and my career had reached a new high. The future looked bright and much time was spent talking about buying a home and starting a family.

This all changed on May 12, 2009. I had been going to the doctor for several months because of some unusual bowel symptoms. Like most men, I didn’t go the doctor often, but these symptoms were really starting to negatively impact my life. I remember the first trip to his office. I was embarrassed, and given my symptoms, terrified at the thought of what kind of tests he was going to do. I was relieved when he simply recommended that I start taking a fiber supplement.

Unfortunately, my symptoms persisted. My life was beginning to revolve around where the bathroom was. As soon as I entered a store or restaurant, it was the first thing I looked for. I traveled a lot for work, so I began sitting in the back of the plane so I could be near the restroom.

Eventually, I became my own best advocate with the doctors. I knew something was wrong and I was sick and tired of the life I was living. My own research indicated that it could be colorectal cancer, but I quickly dismissed that because of my age and lack of cancer in my family history. I discussed other possibilities with the doctor, and my persistence finally paid off when he referred me to a specialist. After my initial visit, the doctor believed I had Crohn’s disease or colitis but would need to conduct a colonoscopy to confirm. I was so excited to be getting somewhere that I actually greeted a colonoscopy with open arms. (Remember, just a few months earlier, I had been terrified to even go to the doctor and nearly skipped out of his office after simply being prescribed fiber supplements.)

My colonoscopy was set for May 12, 2009. The rest of my family lives in Seattle, and all of them had been supporting me from a distance. I remember getting a lot of texts that morning wishing me “good luck.” I was awake during the procedure, but was heavily sedated. I remember watching the colonoscopy on the digital screen in front of me. At one point, the doctors discovered the abnormality that was causing my symptoms. I assumed it was Crohn’s or colitis, and was relieved to finally have an answer.

The doctor came in shortly after the procedure and told us that she had bad news. It was cancer. I remember thinking this must be some sort of mistake. She must have the wrong room. I can recall feeling very hot and my ears ringing. I thought to myself, I am going to die…and what am I going to do between now and death?? The doctor was still talking but I wasn’t listening. I thought, all cancers are not the same and maybe I was overreacting. But after looking at my wife’s face and seeing the red welts that had appeared on her neck, I quickly realized that was not the case. I snapped out of my haze and asked the doctor what was next. All she could tell me was that I needed to have surgery. The crazy thing about being diagnosed with cancer is 10 minutes later you’re out on the streets and back in the world.

After I got home, I called my family and told everyone the news. I felt terrible about unloading it on everyone. None of it seemed real at the time, and everyone had a lot of questions…and I didn’t have any answers. I woke up the next morning and thought, did that really happen yesterday? Do I really have cancer? Once I realized it wasn’t just a bad dream, I broke into tears. Reality was setting in and I was scared. I didn’t want to die.

The next step was to schedule appointments with other doctors. I’m not sure if there’s anything more frustrating than being told that you have cancer, and then calling for follow-up consults and being told that the next available appointment is in four-five weeks. I had another meltdown. I thought to myself, Hello!! I am dying here and the quickest you can get me in is a month! Will I even be alive then? Again, being persistent is my best advice to getting things to move quickly. You have to be your own best advocate.

Through a series of visits, it was determined that I had stage III colorectal cancer. If the thought of dying was not bad enough, I started thinking about whether my career (which I had worked very hard at building) may now be over. And the thought of paying medical bills for the rest of my life was overwhelming.

Over the period of the next 16 months, I had a grueling fight for my life. I underwent six weeks of chemotherapy and radiation, followed by surgery to remove a section of my colon. Complications during surgery required me to temporarily use an ostomy bag, which just prolonged the process. After surgery, I had another six months of chemotherapy. I believe cancer is just as much of a mental battle as it is physical. For me, the mental battle may have been even worse. My post-surgery chemotherapy regimen was every other week for a total of 12 treatments. It slowly breaks you down, and there is nothing worse than starting to feel better, and then having to go back in and do it all over again. After I finished chemo, I had a final surgery to remove the ostomy bag.

I was excited to get back to a normal life, but quickly realized the life I had before cancer was gone. Even though I had a clean bill of health, I realized that I still needed frequent check-ups and close monitoring. This was an adjustment, and it took time to not let the fear of recurrence run my life. I learned to accept that this is now a part of me and who I am.

Shortly after returning to “normal life,” it became apparent that although I had beat cancer, cancer beat my marriage. The divorce brought on a completely new set of challenges.

Today I find myself believing that everything happens for a reason. I’m happy to be alive and know that there is no guarantee for tomorrow. I plan for the future but live for today. All of my initial fears were overcome. My career is thriving (I was promoted a year after returning to work).

No one wants cancer, but it changes your perspective on everything. You learn what matters most in life, who loves you and who you can live without. I now have an outlet and a passion to help those affected by this disease. I actively participate in a buddy program with the Colon Cancer Alliance. The program allows me to share my story with newly-diagnosed patients and offer them hope. This is one of the most rewarding things I do. For me, it really makes the long journey and fight worthwhile when I can help and inspire others. I feel very strongly about educating the young that this is not an “old person disease” that only affects those with a history. The posters on the walls in the doctor’s office are wrong and I am proof of that.

Once you have cancer, you join a group of brothers and sisters for a lifetime. You meet fellow survivors and have an instant connection. If you ever hear those words, “you have cancer,” you will never feel more alone. But know that you are not alone. You will be tested but you have to fight the fight. Give it all you have and you too will see the sun shine a little brighter and the grass a little greener in a new life. A life after cancer.