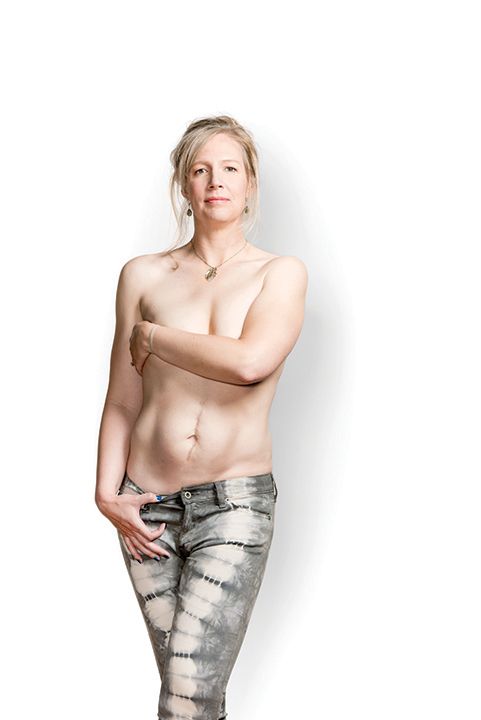 If ever there was a “good” cancer story, it’s the story of Liz Harms. Liz was misdiagnosed like most young colon cancer survivors, but fortunately only for three months.

It was 2010 and 34-year-old Liz was seven months pregnant with her second son. She’d just graduated with her Master’s in Nursing Education. Except for a little fatigue, she was feeling on top of the world until she began experiencing intense abdominal pain on her right side. With her background in nursing, she feared an inflamed appendix or hernia, but never suspected cancer. Bloodwork showed she was anemic. This was dismissed as normal pregnancy woes as she was anemic during her first pregnancy. After her son was born, she began to have night sweats, fatigue, light headedness, and she noticed everything tasted more salty than it really was. Liz had dark-colored stools, but knew that the iron supplements she was on could cause them. She dismissed all of these symptoms as hormonal changes and the stress of raising a young family.

At Liz’s six-week checkup with her midwife, her blood count was so low she was sent to the hospital for a blood transfusion. Once in the hospital, her doctors sought the source of her anemia. Liz endured a battery of tests including a colonoscopy which revealed a tumor in her colon. She was scheduled for surgery the next day. The tumor was malignant and Liz was diagnosed with stage IIC colon cancer. Surgery was followed up with five weeks of radiation and 12 rounds of chemotherapy. She was very sad to have to give up breast feeding her baby, but Liz sailed through her treatments with no complications. Liz’s treatment lasted six months and she hasn’t had any reoccurrence. “The hardest part,” she says, “was my sense of security was gone. The illusion that death was supposed to be off in the distance was over.”

Managing all of her doctor appointments and treatment schedule while being mom to a 3-year-old and 8-month-old was difficult. “It was a slap in the face that my life, my body, and my family was no longer my own but belonged to the torturous rollercoaster of cancer.” Liz had great support from her family and friends throughout her treatment but still felt isolated and alone, so she sought out cancer support groups and found a therapist. One of the places Liz found support was the Stupid Cancer blog, which led to her and her husband attending the Stupid Cancer OMG Conference in Las Vegas in 2012. She believes the conference was most beneficial for her husband as he connected with other caregivers. Liz tears up when talking about how her diagnosis affected her husband. Cancer doesn’t happen to individuals, it happens to families, and finding support for her husband was important to her.

Liz is very passionate about connecting young cancer survivors. She never wants anyone to feel alone like she did, so she organizes the Denver chapter of Stupid Cancer. The group meets once a month to network, share ideas and generally support one another. In 2015, Liz was on the steering committee for CancerCon, Stupid Cancer’s national conference in Denver. She is also active with First Descents, Imerman Angels and is the lead administrator for a Facebook page called WTF: Winning the Fight Colorado.

Surprising even to herself, Liz has taken up running. Although she started running as part of a colorectal cancer fundraiser, she says, “I continue to run for my own mental sanity.” Being a nurse, Liz, understands that sometimes people are hesitant to take medication including anti-depressants or sleep aids. She stresses the importance of a healthy mental state and feels when used properly, these drugs can really help.

Cancer has given Liz a unique insight professionally, as a nurse. She shares her experience with her patients in hopes of giving them “an image of survivorship, in a positive light, that this diagnosis is NOT the end of the world but a challenge to overcome.”