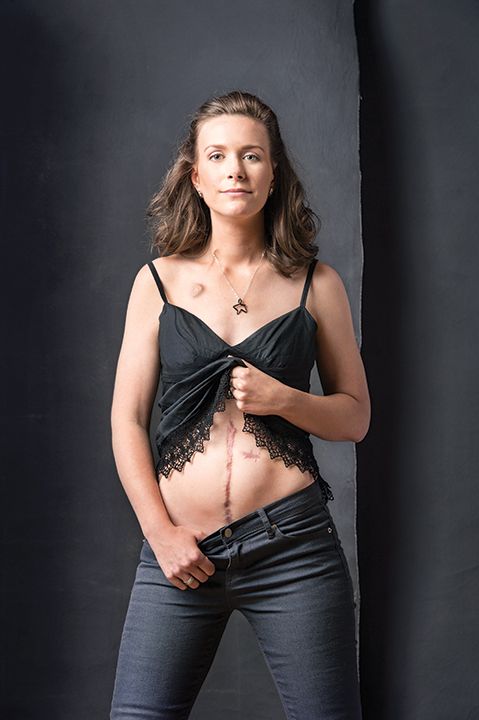 Picture this. You’re 26 years old, newly married with a new home and a successful baby photography business in your hometown. You’re happy and eager to have a baby yourself. You get pregnant and the baby ball starts rolling. You’re on cloud nine, but suddenly your world stops. You’re 17 weeks pregnant and just been told you have colon cancer.

That’s the story of Lindsey Motley of Greenville, South Carolina, who ran a half marathon just six months before being diagnosed.

Lindsey started taking prenatal vitamins prior to becoming pregnant and was only mildly concerned when she saw streaks of blood in her stool. One of the most common side effects of the vitamins is constipation, but after she became pregnant, the amount of blood she saw was continuously increasing and Lindsey knew she needed to see a doctor.

Given how rare the idea of being diagnosed with colorectal cancer while pregnant is, it took three visits to the obstetrician before Lindsey finally was advised to have a colonoscopy. Her husband Jay, a physician himself, was wanting to know as much as he could about the medical side of the cause of his wife’s bleeding and stayed in the room to watch the procedure. When Lindsey woke, she saw that Jay had been crying and at that point she knew the news would not be good. The colonoscopy had revealed a tumor and both Lindsey and her baby were in a medical “danger zone.”

Since there were so few cases of women having surgery or chemotherapy while pregnant, local doctors recommended that Lindsey be seen at the Cleveland Clinic because it specializes in high-risk colorectal cancer patients.

Lindsey and Jay headed to Cleveland, where another round of tests was done and surgery plans were quickly made. Four days after those tests and just a week after being diagnosed, Lindsey underwent surgery that she said changed her life forever.

“With my tiny sweet potato-sized baby inside, my uterus was lifted up out of my body. The surgeons removed the tumor and put the baby back just where it should be and I was left with a temporary colostomy.” After spending seven days in the hospital and receiving the pathology report that confirmed her diagnosis of stage III colon cancer, Lindsey and Jay headed back to Greenville for the comforts of home — hoping those comforts might make having chemotherapy while pregnant more bearable.

Six weeks after surgery, at 24 weeks gestation, Lindsey began the FOLFOX-5 chemotherapy regimen and completed seven cycles before her beautiful baby girl Lilla was born — healthy — at 37 weeks. Lindsey finished the last five cycles just after Lilla turned two months old. At this point Lindsey started to feel that she could be a mom, not just a cancer patient. In December 2013, Lindsey had her first truly clean scan and was declared cancer-free and had her colostomy reversed in January 2014.

As Lindsey explains it, Jay has been her rock through this experience. She often thinks back to the day on which she and Jay said “in sickness and in health,” and marvels at how this experience has made each of them stronger. She says, “This experience has tried my emotions, my relationships and my faith more than I could have ever imagined. It has strengthened each of those beyond measure.”

In March 2014, Lindsey would rely on her strength again, when additional scans revealed the cancer had spread to her liver. Time for chemotherapy again, this time FOLFIRI plus Avastin, which shrank the tumors enough for her to have a liver resection at Houston’s MD Anderson Cancer Center just a week after returning from the Colondar photo shoot in June. She finished another six sessions of chemotheraphy after the liver resection, followed by a scan that revealed yet a new lesion. She had a liver ablation procedure immediately, but at her two-month follow up scan in December 2014, it was revealed that the cancer had now metastasized to her lungs, in addition to another new liver lesion and a recurrence in her colon. She continues her fight.

On her CaringBridge site, Lindsey writes: “The realities of treatment can be emotionally and physically tolling — but we always come out stronger and fighting harder on the other side.”

Although her cancer experience has left her afraid of missing moments with Lilla and feeling robbed of as much time with her family as she’d like, Lindsey says, with her typical grace, “Life is wonderful.”

While she’s tired of dealing with cancer and wants to return to work, being a mom and doing what she wants, this survivor reminds us to worry about what is in front of us, not what’s behind us, and to “take each day as it comes and truly enjoy it.”

UPDATE: We are sad to share that Lindsey has passed away.