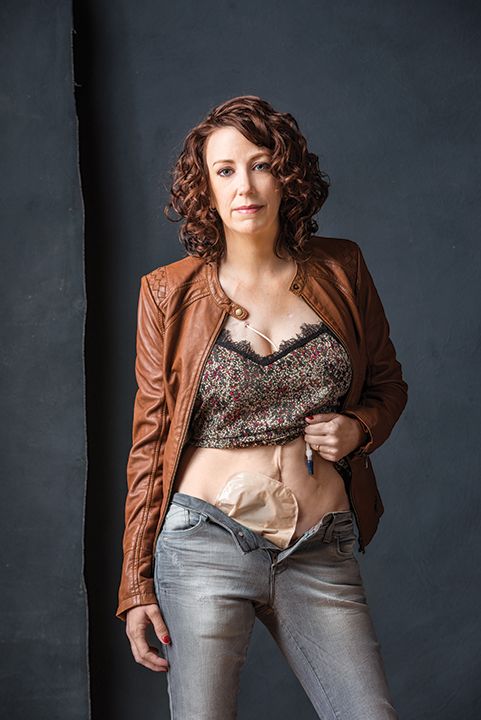 Leighann Sturgin is a walking miracle. After receiving a stage IV colon cancer diagnosis in 2004 at the age of 30, Leighann was offered hospice care. Since then she has endured seven surgeries, including a colectomy, hysterectomy, splenectomy and two Hyperthermic Intraperitoneal Chemotherapies (HIPEC), toxic reactions to chemotherapy treatments, dozens of bowel obstructions and a multitude of hospital stays
— 28 in 2008 alone. But the payoff is that she is here today…and miraculously cancer-free.

What Leighann does every day is no small matter, either. All the surgery and treatment has left her with a very high output ileostomy and short bowel syndrome (SBS). Because of the SBS she must infuse total parenteral nutrition (TPN) for at least 9 hours every night; she must intravenously “feed” herself in order to receive the extra nutrients she needs because she has no colon and very little small intestine left. If she happens to be awake during the infusion, she carries her IV bag around in a cute denim bag. An outsider would never even notice what she is doing — keeping herself alive and hydrated.

Leighann’s problems with her colon started when she was just 16 years old and began experiencing diarrhea, severe abdominal pain, cramping and eventually passing of blood. She was first diagnosed with irritable bowel syndrome (IBS), then Crohn’s disease when she was just starting college. Her gastroenterologist (GI) advised her to think about changing her major from engineering to one that would be less stressful. Leighann reduced her credit hours, but refused to change her major; her fighting spirit was already in place. Through many hurdles, including a diagnosis of ulcerative colitis, Leighann managed to obtain her bachelor’s degree in mechanical engineering technology. She landed a great job, married her college sweetheart and had two sons along the way; life was good. But Leighann continued to struggle with bowel issues and a prednisone roller coaster that lasted more than 12 years.

Late in 2003, Leighann was running to the bathroom 20 to 25 times a day, passing huge amounts of blood, and feeling anemic, in pain and fatigued. She called her GI doctor to schedule a colonoscopy. The doctor wanted to increase her medications and wait six months to do the procedure, but it had been 16 months since Leighann’s last colonoscopy and she insisted on having one. It was scheduled for March 26, 2004, a day she’ll never forget. The doctor said he didn’t even need to wait for the biopsy results. He saw several polyps that were most likely cancer and referred Leighann to a surgeon. The biopsy results confirmed his suspicions.

Since surgery number seven in 2012, Leighann no longer is in constant pain and can eat solid foods. She has to be very careful with what she eats, when she eats, how fast she eats and how well she chews, but she is very grateful to be able to eat.

She has an amazing attitude and spirit and offers some beautiful thoughts. “It’s very important to be your own advocate, to find doctors you trust and who truly care about you, to listen to your body and to stay positive,” she said. “I think attitude is everything. A positive attitude, choosing to laugh and focus on what I have, instead of what I have lost, helps me cope. It is truly a miracle of God that I’m still alive. Cancer has given me the opportunity to experience faith and love in ways I could have never understood before. I’ve had more opportunities to share God’s love in the last 10 years than I did in my first 30. So many doctors, nurses, technicians, friends and family, some of whom, I know, will live for eternity in Heaven because my faith has remained steadfast even in the midst of suffering. So many seeds planted. If I could go back to 2004, I would choose the same path. Colon cancer is part of who I am.”

“When my son was 6, he made me a Mother’s Day card that said, ‘Of all the moms in the world you’re the most alive one.’ And I plan on staying that way for a very long time.”