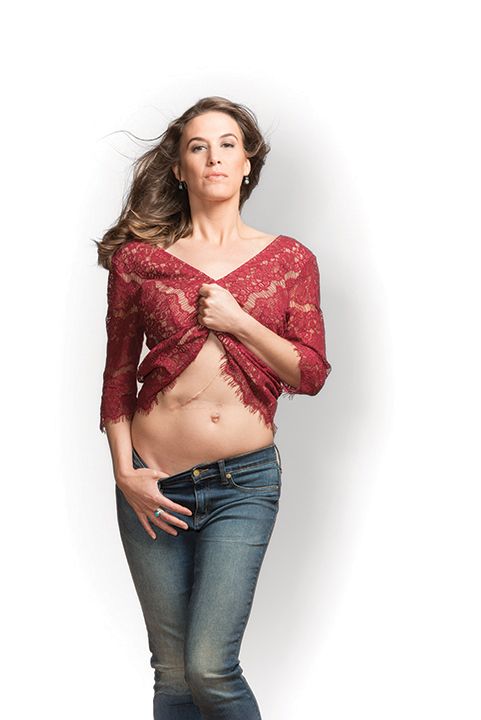 Lauren Miller looks like the beautiful, all-American girl next door. Born and raised in Chicago, she’s an authentic Midwesterner who loves her family, her many lifelong friends and her sports teams. She is particularly fond of NFL football and even plays in a fantasy football league. Lauren also loves children and is a middle school special education teacher as well as a cheerleading coach. Her face lights up when she talks about “her” kids, and when she tells her cancer story to them, she tells it with a very powerful message that she wants them to understand. That you can get through anything in life, no matter how hard it is if you remain positive, stay strong and NEVER EVER give up.

Starting at the age of 22, Lauren remembers feeling like she continually had a sensitive stomach where indigestion and diarrhea became routine occurrences. Lauren’s family and friends even came to accept it as normal. When she was 29, Lauren went through a month of feeling especially terrible. When the headaches, unexplained weight loss, nausea and fatigue would not subside, Lauren decided to pay a visit to the doctor. The doctor immediately noticed how pale she appeared and ordered a blood test. Lauren’s hemoglobin levels were so low she needed a blood transfusion. A colonoscopy revealed a grapefruit size tumor on her colon and a scan showed spots on her liver. Lauren was diagnosed with stage IV colon cancer in October 2011.

Lauren had colon surgery three days later. She hated the feeling of helplessness she experienced in the hospital and didn’t even like calling the nurses for help when she needed it. She was thankful to have the help of her mom, who traveled from Omaha and took care of everything while Lauren was recovering. Lauren’s mom is a two-time cancer survivor herself, diagnosed with stage II ovarian and uterine cancer when Lauren was 12, and stage I colon cancer six years later. Both she and her mom have since tested positive for Lynch Syndrome, a genetic condition that increases the risk of colon cancer and other cancers, and also increases the chance of developing the disease at an
earlier age.

Given Lauren’s extremely independent nature, she found it very difficult to allow herself to put her guard down and let her family care for her. Her mom insisted she move to Nebraska when she was going through chemotherapy, but Lauren was hesitant. She had been on her own for 11 years. She especially didn’t want to move away from her dad. In the end she agreed it was best, so Lauren packed up her life and moved to Omaha.

Lauren completed eight weeks of treatment, and scans revealed that the tumors on her liver had shrunk and 60% of her liver was removed in surgery a few weeks later. Recovering from this surgery was the hardest thing Lauren had ever been through and she wanted to give up at times. She was hospitalized for 10 days, including three days in ICU and vividly remembers having a G-tube (gastrostomy tube) down her throat during the Super Bowl. This was her lowest point and Lauren thought surviving cancer seemed impossible. She had to be readmitted to the hospital for an additional five days because she couldn’t keep any food down. Lauren’s mom reminded her she was a fighter and Lauren started realizing the power of never giving up. She persevered, fought hard and came through it stronger on the other side.

Lauren decided to move back to Chicago to finish up her second round of chemotherapy and be closer to her dad and stepmom. Lauren’s dad reassured her that it would be okay, something he had always said to Lauren that would eventually have special meaning to her. Lauren’s dad was always her hero, but she was thankful more than ever to have him nearby.

It was June 2012, and Lauren was thrilled to be finishing up with treatment and anxious to have a PET scan to find out if she was cancer-free. When her boyfriend said at the last minute he would take her to her appointment instead of her stepmom, Lauren thought nothing of it. When he started pressuring her to call her stepmom immediately after the scan, he suddenly couldn’t keep the secret any longer. Through tears he said, “I can’t do this. Lauren, your dad passed away last night.” Lauren’s dad suffered a sudden and massive heart attack and died at the age of 62. Lauren fell apart. Losing him was harder than anything she had experienced in her cancer journey. After finding out her father was gone, she didn’t even care that her scan results were good.

Lauren has been cancer-free since the fateful day she lost her dad. She went through a period of heavy grief and mixed emotions over his death and everything she went through in her life that year. She kept journals to deal with what she was feeling and found a re-occurring theme: the anger she felt fueled her stubbornness to not give up and to continue having a positive and hopeful attitude. Lauren knows this is what her dad would want. She has been able to tap into his strength and wisdom in a way she hadn’t realized before. To NEVER EVER give up, no matter how hard things get. This is no doubt a powerful message that Lauren will continue to pass along to everyone, including her students.