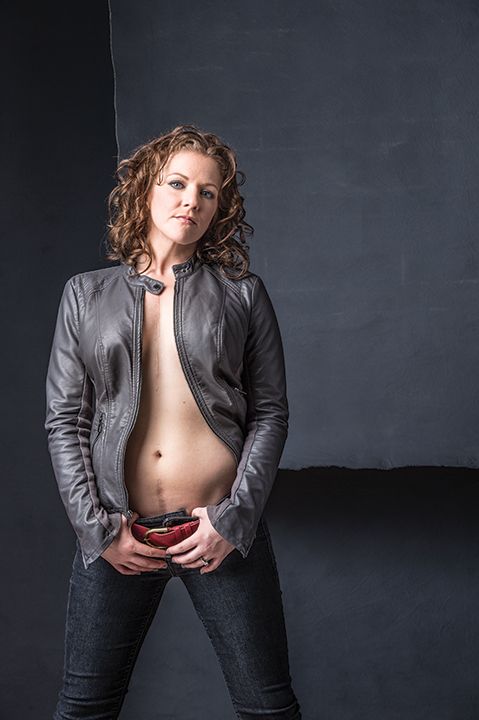 “No biopsy. Too young for colon cancer.”

That was written on one of Kristen Toppin’s earliest colonoscopy files. Kristen did what she was supposed to do — she talked about what was happening with her body. In high school, she started noticing occasional blood in her stool, so she went to the doctor and had her first colonoscopy. At the follow-up visit, the doctor explained, “one drop of blood can look like a lot in the bowl.” He told her that he hadn’t ordered any biopsies because she was too young for colon cancer; he instead recommended a high-fiber diet.

Unfortunately, Kristen’s family was all too familiar with cancer. Her dad was diagnosed with Non-Hodgkin’s Lymphoma at the age of 35, and fought several relapses over 20 years. Wanting to accept that her symptoms were not related to cancer, Kristen hesitantly accepted the diagnosis of internal hemorrhoids.

After a year of eating high-fiber foods, the bleeding only got worse, and Kristen was convinced she needed another opinion. Her new doctor did not dismiss her symptoms due to her age and was actually quite concerned. This time a colonoscopy revealed a tumor in her lower colon, and at 22 she heard those familiar words — “It’s cancer.” Diagnosed with stage IIIC colon cancer, her treatment regimen would include surgery plus six months of chemotherapy and radiation.

After surgery and a month to recover, Kristen went off to college with a port in her chest and a fanny pack full of chemotherapy. With her spunky sense of humor, she says, “I was especially popular when the tubing would become occluded and would start beeping loudly.”

Halfway through the chemotherapy, Kristen got her first tattoos — the unmistakable markers for radiation. Before radiation began, she was told that these treatments would alter her fertility. The fact she wouldn’t be able to conceive hurt more than the diagnosis of cancer. Infertility affects many women diagnosed with colorectal cancer, but has often been considered simply a secondary casualty of treatment.

Kristen quickly searched for alternative answers and found out about fertility preservation — the process by which eggs are harvested before treatment with the hopes of conceiving via in vitro fertilization at a later date. She had two weeks to complete this process before radiation treatment began. The process is complicated, uncomfortable and expensive, but is a good option for many young colorectal cancer patients. The desire to have children far outweighed her fear of needles, so she and her then-boyfriend decided to freeze embryos. Due to radiation damage and scar tissue, Kristen would need the help of a gestational carrier when they were ready to have children.

With eggs harvested and embryos frozen, it was time to start radiation. Not only was Kristen beginning radiation, but also suffering the side effects of hormone therapy. Uncomfortable, overweight and in constant pain, the only saving grace this time was taking chemotherapy orally. However, as predicted, radiation sent Kristen into early menopause. On top of the side effects from chemotherapy and radiation, she now had to deal with hot flashes.

Kristen’s family isn’t close geographically, but they support each other. Her mom drove two hours to attend every appointment; her parents took out a loan to give her the opportunity to have a child someday; and her boyfriend stood beside her as she rode this emotional roller coaster. When he proposed, there was no hesitation to say yes.

Cancer gave Kristen and her father a bond no one should have to form, but a bond that she will forever hold close to her heart. When his cancer returned, Kristen and her fiancé moved up their wedding date. They got married (for the first time) in the hospital chapel so her dad could walk her down the aisle. They cut the cake in his hospital room, and had their first dance at a nearby hotel bar. Her father passed away shortly after, and Kristen and her husband had a more formal wedding one year later with a candle memorializing her father.

Today Kristen is not only cancer-free, but she and her husband welcomed a baby girl, Hadley Kay Toppin, in December 2014! Her close family again jumped at the opportunity to lend their support, and her sister-in-law was Hadley’s gestational carrier.