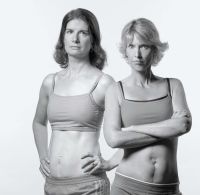 Kim Troisi-Paton knows that sometimes you have to educate yourself instead of relying only on your doctor.

For more than five years, Kim was bloated, fatigued, anemic and had sporadic rectal bleeding, but her doctors told her it was nothing serious. When her OB/GYN suggested taking anti-depressants, Kim took matters into her own hands. A former boss had talked openly about getting his colonoscopy, so after doing some research, Kim demanded one for herself. She was diagnosed with stage III colon cancer and had surgery and chemotherapy.

Kim had the strength to stand up to reluctant doctors. She wants others to have the courage to take charge of their own health care and get answers when they know that something is wrong.

KIM’S STORY AS TOLD BY KIM:

I’m always over-analyzing everything because I’m a lawyer, and over-analysis is what I do for a living. That said, I think my story began in 1990; I was 20 years old and I was going off to my senior year of college. I really wanted to figure out why I suddenly kept having diarrhea, so I went to my family doctor. He just told me to not drink so much fruit juice. I was completely mortified and sorry that I brought up something that was so easy to deal with – so I quit drinking orange juice in the morning.

I went off to college, thinking that I had embarrassed myself and marred my family name in our small town. I didn’t talk about any of my bathroom issues for nearly 15 years because I was so horrified by the thought that I was such a hypochondriac over something that was so simple.

In 2001, I was pregnant with my daughter, Ashley. We were away on vacation and I had an unbelievable headache for about a day and half. I sat down to eat dinner and I really couldn’t eat. I had to go to bed at 9:30 or 10, which was very early for me in those days. In the middle of the night, I had to run to the bathroom and the result was a toilet full of blood. I tried to tell my OB/GYN about it, but I didn’t describe it as a toilet full of blood, and he didn’t pursue a detailed description.

I didn’t have many more problems during the pregnancy, although I do remember that at one point I had such a horrible pain in my left side that I dropped to my knees at work. I mentioned it to my doctor, and I said that it was very severe – so painful that I fell to my knees. The doctor said “Well, you’re pregnant. Your ligaments are stretching.” Once again, I felt embarrassed over raising something so silly and trivial with a doctor.

When Ashley was about eighteen months old, we decided that we would try to have another child. I wasn’t feeling that great – I was quite tired all the time – but we didn’t want to have too much of an age gap between our children. When I got pregnant with our son, Zachary, I complained of horrible – I mean truly unbelievable – bloating throughout the pregnancy. I was told to take my prenatal vitamins at night instead of in the morning to minimize bloating. I remember toward the end of the pregnancy, I was crying at the doctor’s office and saying “This is not fun anymore.” At my postpartum checkup, I said that I was very fatigued and having trouble recovering. The doctor and I left it at that.

A year later, at my annual exam, I was sobbing at my OB/GYN’s office. I said, “The fatigue is just so overwhelming.” My OB/GYN said, “If you aren’t feeling better in three months when the sun comes out, we’ll put you on anti-depressants.” I had also recently gone to my primary care doctor, who said I was slightly anemic, but he wanted to wait a month before doing any more testing. I didn’t want to wait a month, and I didn’t want to go on anti-depressants without further medical investigation. I wanted to know what was going on.

After the appointment with my OB/GYN, I went home and started researching, trying to diagnose myself.  From 1998 to 2000, I had clerked for a judge on New York State’s highest court. The judge’s father had passed away from colon cancer and I think his grandfather also had it, so the judge was screened regularly to remove polyps. He was very open with his clerks about his colonoscopies, and his honesty may have saved my life.

I really hadn’t heard much about colonoscopies before I worked for the judge, even though my grandfather had colon cancer 25 years ago, when I was 10. I vaguely remember going to see my grandfather in the hospital for something related to his stomach, but I didn’t truly grasp that he had colon cancer because he never had chemotherapy. While I was researching my symptoms, I remembered the judge’s colonoscopies, and that’s part of what inspired me to request one for myself. I went back to my primary doctor’s office to demand a colonoscopy.

I had never actually met my primary doctor. I had only seen a Physician’s Assistant at the office, and I definitely scared him because I so assertively demanded a colonoscopy. I was having horrible symptoms by then, which I described in detail, including blood in my stool. Yet, on the referral to the GI doctor, the PA simply wrote “loose stools.” I was annoyed and brought the referral into the GI’s office that afternoon, hoping it would somehow expedite the process. The office scheduler, who had no medical training whatsoever, looked at the referral slip. I told her that “loose stools” was a euphemism for what was going on. I described my symptoms, and when I discussed the blood in my stool, it raised a red flag. She had me make a regularly-scheduled appointment for two months later, but told me she was going to speak to the doctor and the doctor might want me to do something sooner. By the time I got home, there was a message from the scheduler that said “The doctor does want to see you soon. Can you come in two weeks rather than two months?”

I saw the GI doctor on a Thursday evening. He is my age and cute, and the thought of him doing a colonoscopy on me was mortifying, but by that point I just needed help, so I didn’t care. I described all my symptoms, and told him that I couldn’t get out of the bathroom and had two kids climbing all over me in there. He said, “I have three kids, and I know what you mean. I am going to walk you out to the scheduler and we are going to schedule you for next week.” He scheduled me for a colonoscopy the next Monday morning.

When I woke up from the colonoscopy, he said, “We found a mass and I’m assuming that it’s cancer. We’re calling the surgeon and we’ll get you in right away.” I had the colonoscopy on May 16, and I call that my day of diagnosis because the doctor said that he was assuming it was cancer. This guy was really good, and when he told me that he thought it was cancer, I figured he knew what he was talking about and was probably right. As my doctor left my husband and me to contemplate my prognosis, he said, “This is not a death sentence.” All the same, I turned to my husband and said, “I’m sorry I ruined our life.”

I saw the surgeon that Thursday. He is very direct, and he said that we needed to address the tumor immediately, regardless of whether it was malignant. He already had the result from a CT scan done the day after my colonoscopy. The pathology report from the biopsy taken during the colonoscopy came in to the surgeon’s office as my husband and I were meeting with him. Thus, my surgeon was the first one to officially declare that I had colon cancer – a large mass in the sigmoid colon, on my left side. The surgeon had a cancellation for Monday morning the 23rd and we all wanted to do the surgery right away. This years-long saga of pain and embarrassment culminated within just one week of my colonoscopy.

The day I was discharged from the hospital, the doctors told me that I was Stage III and I would need chemo. There was never any question that I was going to take the chemo. My daughter was 3 ½, my son was 14 months, and I was married to the love of my life. I decided to fight for every minute.

My chemo was called “FOLFOX,” and I also received Avastin, a biologic drug. Every other week for 24 weeks, I went to the hospital for my chemo. My day there would end up being about eight hours. Before I left, I got hooked up to a 5FU fanny pack for 46 hours. It was grotesque. I hadn’t been able to do a chest port because I knew Zachary would head butt it, so I had a port inserted in my left arm instead. I would snake the tube from the fanny pack up through the inside of my shirt. When I changed Zachary’s diaper or snuggled with Ashley, the tube would snag and it was disgusting because I would feel the needle moving in the port in my arm. It was just foul; there is no other way to describe chemo. About the only good thing I have to say about it is that I finished it, and so far it has worked.

After one of my treatments, I had severe rectal bleeding; it was a toilet full of blood. I called everyone on earth in a panic, demanding immediate attention. My surgeon was in surgery, so I went to see his partner. He asked me what it was like and whether it was more than a couple of drops. Of course it was, and I realized right then that if my OB/GYN had asked me to describe the prior bleeding episode that I had in detail, I would have gotten diagnosed nearly five years earlier. I have mixed feelings about that; perhaps I should have described it in more detail without being asked, or perhaps a doctor should know to ask a young woman who might have difficulty being totally forthright to describe something like rectal bleeding in more detail.

After my experience, I have decided to take my cues from the judge who was willing to share personal medical information with people in order to help raise awareness. I think both patients and doctors need to be more educated about colon cancer. Women – particularly pregnant women – need to be very descriptive about complaints and very assertive about follow-up. Doctors need to realize that 50 is not the magic number – a young, apparently healthy person CAN have colorectal cancer. Cancer doesn’t pay attention to demographics and statistics and neither do I. I intend to beat the odds and hopefully help some other people along the way. I would like to thank the producers and sponsors of the Colondar and my GI doctor, surgeon, oncologist, chemo nurses and my incredibly supportive family and friends for giving me that opportunity.

UPDATE: We are sad to share that that Kim Troisi-Paton passed in August 2007.  Kim truly followed the theme,”Be Strong,” in everything she did and was an advocate to the end.  Her legacy lives on with The Kimberly Fund.