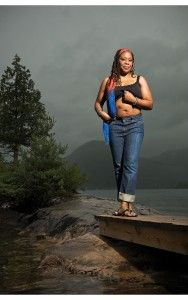 I always thought of myself as healthy. My diet included mostly fruit and vegetables and no meat products. I worked out and enjoyed taking African dance classes. I was happily married to a wonderful man with six great children. But in early 2008, I saw something that changed my life. It was a blood discharge that had me concerned. I called my doctors-yes several of them. My primary care physician and my gynecologist were first. I wasn’t totally convinced that it was something serious but I am forever grateful that my doctors were persistent in finding out what was wrong.

After ruling out hemorrhoids and few other possibilities, I scheduled a colonoscopy with a gastroenterologist. I really didn’t fit the profile but that’s not unusual for me. I’ve had early mammograms and fibroid surgery so I figured it was just my doc being his usual thorough self.

The prep was worse than the procedure. I remember waking up and the GI doc told me I was very lucky. They had found a tumor that was a concern but it was early. When the pathology report came in she called me to come into her office. I only remember the word carcinogen and not much else. I began to cry and she assured me that she merely wanted to rule out the possibility of it being something more serious.

Again, my GI said I was lucky because it was detected early. She held my hand and took me upstairs to meet my new BFF. The colorectal surgeon was kind and informative. He too believed I was lucky and the tumor was caught early but more tests were needed. He discussed the options for removal of the tumor and something about a ileostomy bag that I didn’t really understand how that would work!

After the additional tests were done, it was confirmed. The surgeon began to describe the plan of attack to remove ‘it’ and he mentioned that bag-again!

I remember holding my husband Jeffrey’s hand and tears streaming down my face. At some point, I halted the surgeons’ explanation and said, “Wait, are you saying I have cancer?” He said yes and I resumed crying. He continued with his plan of attack which sounded very strategic, careful and focused. I remember he said it (my bowel) will never be as good as God made it but he’ll do his best. It was December 2008.

I was told that I had time and I could schedule the surgery for after the holidays-great, my bad news wouldn’t ruin our annual Kwanzaa celebration. I got a second, third and fourth opinion. My
Gynecologist and my Surgeon conferred with each other. We all agreed he was good and his plan was solid. So I had the surgery in February, 2009, a bowel resection with a temporary ileostomy bag.

After surgery, I remember the pain and my family and friends hitting my morphine button for me as I moaned. They were the best! I did not like the bag and it reminded me daily of how my life had been turned upside down. At my two-week post-surgical follow-up and staple removal, it all changed again. The pathology report of the tumor had restaged my cancer to Stage III-lymph nodes were involved. I was devastated and totally unprepared. I was struggling with the ileostomy bag and had just begun to heal a little bit.

Now I needed another plan of action which included chemotherapy and radiation. Again, I got several opinions and did my own research. Most importantly, I became my own advocate for survival and beating this disease. I searched high and low for the right oncology team. I decided to have my ileostomy bag removed before I started chemotherapy which was not recommended but worked well for me.

So the next journey began chemotherapy, radiation with chemotherapy infusion and chemotherapy again. Another set of BFF’s who are determined to fight for my survival. Their medical expertise and human connection was and still is the best. I remember my oncologist saying, “Us moms have to stick together.” Wow! My treatment was done at a different hospital than my surgery but I was confident that I had developed my own team and we had devised a treatment plan that was right for me.

My treatment lasted From May 2009 – December 2009. I continued to work throughout the year. My employer and co-workers were supportive and understanding which was wonderful-believe me, it’s that last thing you want to have on your plate during treatment. The chemo and radiation treatment took its toll on my body, mind and spirit. Cancer has a way of alienating you even when you’re surrounded by those who care and love you.

My family was great and I had to get used being taken care of and not being the care taker. My family provided me with the strength and courage I needed and that I wasn’t sure that I had . My husband who was wonderful before this illness was a solid rock of support and love-always. No matter how I looked or felt or whatever appointment I had-he was there. He was even funny and joked with me. I’ve been NED since Dec. 2009.