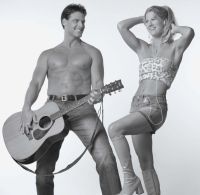 Kim Gimpel was occupied with her hectic life when a serious disease slowed her down and reminded her to take time for herself.

Kim spent several months going to doctors and had multiple tests before finally being diagnosed with stage II colon cancer. She learned to juggle her family while dealing with exhaustion and other difficult side effects of surgery and chemotherapy. Kim kept herself going by working out regularly and remembering that many others go through much worse things in life.

Although Kim has many obligations in her life, she still tries to enjoy the little things each and every day.

KIM’S STORY AS TOLD BY KIM:

Growing up, going way back to the beginning, I’ve always been irregular as far as going to the bathroom. Looking back I don’t know if that has anything to do with the cancer or not. It took me about three months to get diagnosed – they told me at the beginning of January, so it was October, November and December.

My son Dylan had just turned one when I was diagnosed. When I was pregnant with him, he was pretty big and in the end when he could move around I would tell everyone I know you think I’m crazy but he is stepping on something. I don’t know if there was something there or not. I went to the doctor and said “There is something there.” He did an ultrasound but he said, “Well, there’s nothing there.” When Dylan moved, the pain was so bad that I would almost go to my knees.

In October of 2004, I started experiencing a lot of pain in my abdominal area, but I played it out for a few days thinking it was nothing serious. I have a friend who’s a nurse and she said to take a stool softener. I felt like I needed to go, but when I tried it was really painful. That was over the weekend and by Sunday night I knew in the back of my head that there had to be something more serious wrong. I went to the emergency room and sat there for eight hours. When they started passing me up, when they took three or four other people first, I thought that it obviously wasn’t serious enough and so I went home.

The Friday before I had tried to get in to see my doctor and the receptionist didn’t even put me through to the nurse.  She said, “Oh.  Well, he’s busy.” So, Monday, I called and said, “I don’t care if he’s busy. I’ve got to see him.” I got in and he sent me down for a CT and said I had an infection. He gave me antibiotics and sent me to a surgeon who said it was probably diverticulitis and that I needed another scan in two weeks. I didn’t understand everything, but the surgeon said that it couldn’t be diverticulitis and sent me to another doctor for a colonoscopy. I drank a whole gallon of the prep but it didn’t work. I went in for the colonoscopy and said, “I don’t think it’s going to work.  I’ve never had a colonoscopy before but I don’t think you can do it,” and they couldn’t. The prep hadn’t worked at all.

So I went home and the next day I tried the prep again and it worked a little. So she went in anyway.  She got in enough to notice that there was a blockage and she took a piece and did a biopsy. It came back cancerous and she said, “There is no way.  You’re too young.”

This was over Christmas of 2004, and my doctor was awesome.  She called me every day to see how I was doing and she kept on top of my case. At first she said, “Maybe it’s Crohn’s disease.” She was waiting on results, but meanwhile she put me on medication, so I got on the medicine for a few days. She just didn’t believe it could be cancer because I was so young.

The doctor was not satisfied and so she wanted a bigger piece to biopsy. I did a barium enema and I said, “If you ever ask me to do that again, I will run!” So then they went in and did a sigmoidoscopy and got a bigger piece and it was definitely cancer. They went in to do surgery and the surgeon said, “I’m not sure what we’re facing, so let’s not do laparoscopic. I’m opening you all the way up because I want to see everything.” Sure enough, it had perforated and attached to my rectum and vagina, so they took a lot of that out as well as a foot of my colon. I was kind of worried about having part of my vagina taken out. I had to go two months without sex, and I’m not a sex fiend so I won’t die without it, but my poor husband. It’s not that big of a deal, but I was worried at first. But nothing feels different.  Sex does not feel different.

After surgery I went to the oncologist for my chemo. I had been very concerned about taking care of my kids while I was on chemo, so I was worried. I would go in for my treatment all day on Monday and they would send me home with a bag for 48 hrs. They gave me two or three different drugs on Monday.  Then I went home with the bag. My first treatment went really well and I thought, “Okay, wow.  This isn’t going to be too bad.”  Then my next treatment didn’t go so well. So many people said, “I can’t believe you do all that you do,” and I said, “Well, what would you do?” With kids, you can’t slow down, so I just made the best of it and kept going.

The norm, I guess you could say, is that I would have no energy, and I experienced a lot of really weird things on chemo. I had nose bleeds and my oncologist gave me stuff for that. Every morning I would wake up and my nose would just start bleeding. My oncologist has been practicing a long time and I was a lot of firsts for him. I would get this crazy feeling in my body, my fingers and toes.  I couldn’t touch anything cold, and I still don’t have full feeling in my toes. Things tasted different.  I think that’s normal too, from talking to people at treatment. I lost a lot of hair but I didn’t lose all my hair.  I was very nervous about that.

It got to the point where I didn’t even want to tell my husband. He was very, very supportive, but you just get to the point where you feel like all you do is complain. I did twelve rounds of chemo and that was it. Of course I’m still doing checkups, getting PET scans and crossing my fingers, hoping nothing else comes up.

I’ve not even met one other person who’s been diagnosed, and that’s been hard. Where I live, there’s nobody else around. My gastroenterologist told me about The Colon Club website.  She was so funny. Someone in her office found the website and ordered a Colondar and she told the doctor. She remembered me and she told my doctor, “Look at this. Don’t you have a young girl?” When I went in she said that I had to sign up for the Colondar – that I would be perfect for it. At the time I just thought there’s no way I could go through anything like that.

As months went on and things got better, I thought, “You know what?  That would be really cool.”  I finally logged on to The Colon Club website and started reading the stories and meeting people and I thought it was too cool. I really enjoyed reading the stories.  It made me feel better. What I went through was not wonderful, but there are so many people around my age that have gone through so much more. Not that I’ve ever sat around and felt sorry for myself, but everyone thinks, “Why me?” Then I thought if I really did get in the Colondar, I could go and sit down and talk to people who have the same problems I have, and just talking to other people about what I’ve gone through would be really nice.