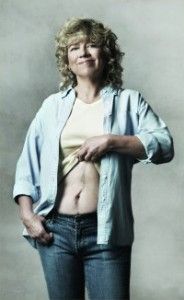 I’m a survivor of three different cancers:  breast, colon and ovarian.  I am happy to be alive and grateful for each day, but for many years, I was sad and angry.  That’s because cancer wiped away my dream of being a mother.  When I was diagnosed with breast cancer, I was 36 years old. My husband and I had only been married for two years. I was recovering from a miscarriage and trying to get pregnant again. I was so angry that one evening I ran into the kitchen and flung open the cupboard doors. While my husband watched in horror, I grabbed a dinner plate and smashed it onto the floor. One after another, the plates crashed on the linoleum until my rage subsided.

The breast cancer was stage 1C, I had a lumpectomy, radiation and chemo, and as the months and years ticked on, I recovered, and life was good.  Because of the possible effects of estrogen on breast cancer, I made the painful decision not to get pregnant. We decided to adopt. We traveled to Brazil to bring home two children, ages 3 and 6, from an orphanage, but that adoption failed.

Eight years after the breast cancer, when I was 44, we were packing our bags to go to China to adopt a baby girl.  But I suddenly developed terrible pain and gas in my abdomen after eating. My family doctor ordered blood tests and an abdominal ultrasound. Because of my age, I had never had a colonoscopy.  The blood test showed my hemoglobin was 7.5, so I was severely anemic, but the ultrasound showed nothing. The next test, a barium enema, showed near-total blockage of the transverse colon.  I had surgery three days later. Eighteen inches of colon was removed, and the cancer was Stage 2. The cancer had gone outside the colon, but was not in the lymph nodes.

The chemotherapy, 34 treatments, took a year. I was supposed to have 36, but one was canceled because had severe diarrhea and had lost so much weight, and the other was canceled because I couldn’t stop crying. Because of the colon cancer, two months before we were scheduled to go to China, our adoption was canceled.

But life went on. Three years later, when I was 47, Dan and I filled out adoption papers for the third time and were getting ready to go to China again. We called our baby Laura Joy.  But four months before we were scheduled to fly to China, I started having gynecological problems.  I felt like I had to urinate all the time.

At my gynecologist’s, a nurse practitioner examined me and told me that my ovaries were fine. During the examination, I told her that I was scheduled for CT scans of my abdomen and pelvis the next day, an annual follow-up to the colon cancer.   Less than 24 hours after the nurse said my ovaries were fine, the CT scan showed that I had tumors on my ovaries: one was the size of a grapefruit, the other the size of a baseball.

Three weeks later, I was diagnosed with ovarian cancer, Stage 2B, and in a further blow to my womanhood, I had a total hysterectomy, in which my uterus, ovaries, Fallopian tubes and cervix were removed.  I underwent four months of chemotherapy and lost all my hair.

Our adoption plans were canceled again.  And this time, the agency said that because of the three different cancers, I was no longer eligible to be an adoptive mother.

Looking back, I remembered symptoms that were probably signs of ovarian cancer, a cancer that is hard to detect because there is no diagnostic test like a mammogram or colonoscopy.  My belly had been bloated for a few months. I just thought I had gained weight because I was upset about cancer and my lost children.  I had sciatica pain, which was probably caused by one of the tumors.  I was having frequent, urgent bowel movements. But I didn’t tell my doctors about these changes.

One year after I was diagnosed with ovarian cancer, I had genetic testing and found out that I have the BRCA-1 genetic mutation, which explains the breast and ovarian cancer, but not the colon cancer. I was in shock, and actually sometimes I can’t believe that I’ve had three different cancers. When you are diagnosed with cancer, there’s a roller-coaster of emotions: Anger, Sadness, Fear and Disbelief.  Before you can even figure out what’s going on, you’re forced into a scary, alien world of surgery, chemo, blood tests and drugs.

When you become a cancer patient, your life is changed forever. But you can’t go back and undo the diagnosis. You can’t change what has happened. Life does go on, and you don’t want to miss a single second.

In looking back on the past 17 years, I realize that I’ve learned a lot as a cancer survivor.  As horrible as it is, cancer does have its gifts. (Yeah, I know what you’re thinking. All that chemo did something to her brain.)     For example, after you’ve had cancer, you no longer get worked up about your birthday. Unlike millions of other people, you are truly happy for every year of your life. And you get another day to celebrate, your cancer anniversary.

I’ve learned that you can’t get through cancer without help from other people. And the cancer experience has brought more wonderful people into my life than I ever could have imagined.  Through cancer support groups, including The Colon Club, I’ve met other people with their own unbelievable cancer stories, people who laugh and listen with compassion. People who inspire me.

I’ve learned that if you are breaking dishes or crying all the time, it’s a good idea to see a psychologist. Before cancer, I knew nothing about therapy, but now I believe that it was an important part of my recovery. Talking with a psychologist gives your family and friends a break, and you don’t feel guilty about unburdening yourself. It’s good to talk to someone who isn’t sharing your pain, someone who is a professional problem solver.

I’ve learned that a cancer diagnosis can be a kick in the butt, pushing you to do something you’ve always wanted to do. It’s not unusual for survivors to change careers, leave rotten marriages, take up new sports or hobbies or travel the world. With cancer, everyone finds courage they didn’t know they had. And when you discover that courage, you can apply it to other parts of your life.

I’ve learned that cancer survivors really know how to party.  They enjoy life because they don’t wait for things to happen, they make them happen. We’re like surfers, when the waves are big, we hop on and go for a ride. And sometimes, we just have to lie around in the sand and hope that the weather will change.  We live in the moment.

I’ve learned that knowledge is power. The more you know about your disease, the better the questions you can ask your doctor and the more you’ll understand what he or she is trying to tell you.

I’ve learned that cancer is an opportunity to find God again, to look inside your soul, to deepen your spiritual life.  When your body has been cut up and battered, when you are bald and tired, you finally realize that you are more than your body. That it’s what’s inside that matters, not the outside.  I call this LIVING your life INSIDE-OUT.

Cancer is a disease of the body, not the soul. I believe that my spirit lives on, and will live on, no matter what happens to my body.  Cancer patients often learn lessons that some people spend their whole lifetime trying to figure out.  One of the most important is COUNT YOUR BLESSINGS.  At first, it’s so difficult. It takes time and we must be patient. We must grieve for what we’ve lost. Recovery doesn’t happen overnight. We move forward step by step, inch by inch.  Then, you can count your blessings like crazy!  Everyone has something good in their life, something to be thankful for.

Because of cancer, I lost my dream to be a mother, but I do have children in my life. My husband and I totally enjoy spending time with our nephew and four nieces.  We’ve become especially close to our two younger nieces, my brother’s children, calling them “the nieces we love to pieces.”  For four years, I’ve been a Girl Scout leader, working with a wonderful group of girls, ages 7 to 14, who live in a public housing project. My husband and I have a foster child in Ethiopia who writes to us and sends us her report card. For the past four years, I’ve also been part of the Survivors Teaching Students Program of the Ovarian Cancer National Alliance, telling my story to medical students and nursing students so they become more aware of the symptoms of ovarian cancer.