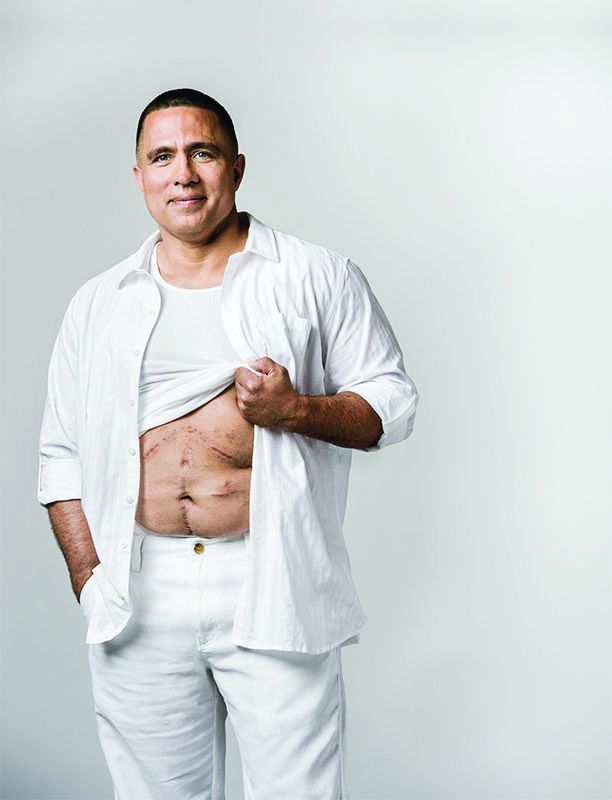 In December of 2008, the last thing that crossed my mind was cancer. I donated my left kidney to my younger brother who suffers from Lupus on June 6, 2006. It took over a year to fully recover where I felt strong enough to hit the gym hard. By that December, I felt and looked strong. I ended going to the doctor on December 23 with what I thought was a case of stomach virus. After a quick check, the doctor felt I had something blocking my intestine and directed me to the hospital. After the initial test failed, I was admitted for additional testing. On December 29, the x-ray showed the blockage and I was scheduled for a colonoscopy the following day. The doctor found a cancerous tumor on the lining and I was shocked into the world of cancer.

I had an operation on December 31 and ended staying in the hospital for a total of 19 days. I spent all the holiday season in the hospital. I lost 35 lbs. in that time. Needless to say, I started the New Year depressed and scared of what was coming. The same surgeon installed the infusion port on my left shoulder in January (although a simple procedure, so I was told, it hurt like hell!).

My oncologist was confident that I could be cured, an idea that was hard to believe considering how I was feeling. By the beginning of February, I started my first chemo session. I still cannot describe how it feels to be on chemo except it sucks…closest I can describe it is to put your brain in a bucket of Clorox and maybe you would understand. After four months off from work, I returned with some limitations, but it was good to be back at work.

I also returned to the gym during chemo-free week and tried to stay strong throughout the treatment. Eating was difficult since smells made me nauseated and food tasted like cardboard or like chemicals. I was able to regain some weight.  I stayed positive or at least presented a front of feeling positive. Through prayers, meditation, eating well and physical exercise I was able to stay focused and deal with the treatments. Many people were surprised to see how well I looked considering I had cancer. Some call me superman even though at times I felt the opposite.

After completing the six months of chemo, I was operated on in August 2009 at Memorial Hospital in NYC and was home within 24 hours! It added to people believing that I could overcome anything. So, I was now considered cancer-free. I started chemo pills for six months and went back to work full-time. I stayed cancer-free for 13 months before new tumors resurfaced on the liver.

I was operated on again in November of 2010, but at RWJ where three new tumors were removed. I was considered cancer-free. Afterwards, I started another round of aggressive chemotherapy for six months as a precaution since it kept coming back. This cocktail gave me a rash, nausea and food again, tasted like crap! But like last time, I dealt with it and kept working full time and went to the gym on chemo-free weeks.

Once completed, I stayed another four months’ cancer-free until it returned again on the liver, but one tumor only. So, we opted for an ablation of the tumor.  I was back to work and the gym within a week. It was decided to stop treatment and wait to see whether I beat the cancer. As before, four months after stopping treatment the cancer surfaced again. It spread to my spleen and it was back on the liver but spread out more.

At this time, my treatment changed from curing me of cancer to preventive treatment to allow me to live the longest. It was hard to swallow after three years of being hopeful that there would be an end. But like always, I kept my head high and with faith continued to the next step. I went back to chemotherapy first to stop the spread. This combination of chemo was the worst. I had the rash, the nausea but worse, and food tasted awful again. Due to the amount of nausea, I was unable to keep food or water down during chemo week. I ended losing 30 lbs. in 3 months. Luckily, this treatment was only three months, if not I am sure that I would have quit!

In September 2012 I was operated on again. The surgeon removed my spleen and gallbladder and installed the hepatic arterial infusion pump. Each time I get operated on I lose an organ and again a piece of hardware. Soon I will be more machine than human! I started the chemo through the pump and so far, it’s going well. I quickly adjusted to the pump and I am back to work and the gym. I have regained my weight and the chemo had very little side effects.

I just had my 4-year anniversary of my cancer diagnosis. For stage 4 colon cancer, the percentage of surviving past 5 years is less than ten percent. So, one more year to beat the odds! I feel strong and confident that with God’s blessing I will be around several more years. I want to be around to see my son graduate high school and hopefully college and beyond!