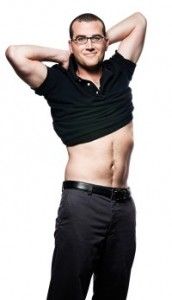 In the spring of 2007 I was a high school math teacher.  One of the student groups would sponsor a blood drive every couple of months, and I would donate so my students would see me wearing the bandage and realize the importance I placed on giving blood.  When I tried to donate at the last drive of the school year, the nurse that tested my blood told me I was too anemic to donate.  This was strange to me because I had no history of anemia, was fine to donate the last time they had been at the school, and had not been feeling especially run down.

I went to my primary care doctor to follow up because I was concerned.  He ordered some blood work that confirmed the anemia.  I had no symptoms of ulcers or bleeding that could explain any loss of blood, so he ordered a colonoscopy.  I woke up from the colonoscopy and learned that I had a tumor near my appendix in the upper part of my colon.

My doctors had said that I couldn’t go back to teach the last several weeks of school because they wanted me to rest in case I needed surgery.  This left me with some time to think about what it might mean if the tumor turned out to be cancerous.  Just weeks earlier, my wife and I had learned we were pregnant with our first child.  We were both very excited and starting to make plans for how our lives would change.  I had also just been notified that I had been admitted to a doctoral program and had been awarded a fellowship for three years of study.  This was also something I had dreamed about for a long time, and the opportunity to work towards a Ph.D. was both exciting and scary.  We had learned about both of these things less than a month before and now I was sitting in my house with the news that there was a tumor in my body.

When we went back to meet the colorectal surgeon, and he told us that the tumor was malignant, we immediately began to discuss options for surgical resection.  One option was to simply remove the section of colon surrounding the tumor.  A more aggressive measure was to remove virtually the entire colon, leaving just enough to maintain relatively normal functioning.  My surgeon said that since I had gotten this tumor at the age of 29, it was likely that at some point in my life I could have a recurrence in the colon.  Removing my entire colon greatly reduced this risk, so we decided to follow his advice.

My surgery was scheduled for the day after Memorial Day.  For someone who had never had a broken bone or serious illness, having my abdomen opened in order to remove cancer was a very scary thought.  My wife and I drove to the hospital on the morning of my surgery.  It was spring and sunny and beautiful.  I remember wishing on that drive that I would have the chance to have more life and to be able to see more beautiful days with my wife.

I had a wonderful doctor who completed my surgery successfully.  In addition to my colon, he removed over a hundred lymph nodes, none of which showed any evidence of cancer.  I stayed in the hospital recovering for less than a week, thanks mostly to my diligent wife and nurses who made sure I got on my feet and moved around as much as my pain would allow.  For the next month it seemed like my goal was just to get moving again, get used to my new digestive system, and allow my body to heal from the surgery.

In late June, we made our first visit to the oncologist.  We talked about the factors surrounding my cancer, especially with respect to my age.  My doctor told us there was not much data for people as young as me, but that the chances of recurrence were significant and chemotherapy could significantly reduce that chance.  My wife and I decided that going through with the chemotherapy would assure us that we had done everything in our power to reduce the risk of a recurrence.  I scheduled a surgery to implant a mediport in my chest, and tried to prepare myself mentally for six months of treatments.

Like many people, I took my chemotherapy treatments in an outpatient facility called the “big room,” a room with 10 or 12 recliners where I sat with other patients while our drugs were infused. Nobody in the big room feels good, but everybody is hoping that the time they spend there will make the rest of their lives better and longer.  The nurses in my big room were amazing – always able to make us smile and feel comfortable, but at the same time very serious and dedicated to their work of making us better.

I still don’t know how to describe my time with chemotherapy.  I had a treatment every two weeks.  I would go in on Wednesday morning for blood work and a visit with my oncologist.  After he said I was okay, I would go to the big room for four hours of leucovorin, oxalyplatin, and 5FU.  By the time I left the hospital, the oxalyplatin had already made it really tough to touch or drink anything cold.  This cold sensitivity lasted for a couple of days at first, but towards the end it would last more than a week.  I would leave the hospital carrying a portable drug infusion pump the size of a camera case around my neck with a line running to the port in my chest.  The pump stayed on for two days and two nights.  It was strange at night setting the pump on the nightstand, making sure there was plenty of slack in the line in case I rolled, and hearing it pump a couple of times every minute.  The two days with the pump were the worst, mostly because carrying it around reminded me of it, but also because it was constantly infusing me with the drug.  After a couple of treatments, I learned how to use my anti-nausea drugs more effectively as the pattern of how I felt became more predictable.  I would go back to the hospital on Friday morning, have the pump taken off, get my Snoopy band-aid on my chest, and tell my nurses to have a good weekend.  It was always great to be free of the pump and to know that I had almost two weeks off.

My chemotherapy treatments coincided with the start of my doctoral program.  I was able to structure my classes and work so that I could fit my treatments in, but I’m honestly not sure now how I was able to do what I needed to do.  Also at the same time, my wife’s pregnancy was moving along, and she was ready to deliver by the first week of November.  When it was time to go to the hospital we checked into our delivery room, and when the nurses came to help get her ready I ran downstairs to the cancer center to have the pump removed to end my tenth treatment.  I got back up to the room, and we both took a nap.  Our son was born later that night, and he was and is the greatest blessing we have ever received.

About four months after I finished my chemotherapy treatments, I was beginning to feel strong again and decided to start running.  I don’t like to run, hate it really, but my cancer treatment had driven home a point – sometimes doing things you don’t like makes you much better than you have ever been and can even change the course of your life.  I started slowly, because my body was in pretty poor condition after the year I had been through.  After a while, however, I decided that I had spent the last year facing challenges just to survive.  With that experience behind me, I thought I should give myself a challenge that could make me better than I had been, so I decided to run in the Chicago Marathon.  My brother, sister, brother-in-law and sister-in-law all decided to run with me.  We trained all summer, and in October we all completed the marathon, a first for all of us.

For me, running the marathon was a metaphor for the previous year of my life.  If I just put my head down and ran, sooner or later it would be over, and I would be better because of it.  Lots of people say that they are better people after having cancer than they were before.  I know for me, it’s certainly changed who I am and how I look at the things that are important to me.  I hope people who read this will see my story as an example of a regular guy who was able to make it through a tough situation with the love and support of his family and friends.  I hope they will see, especially if they are in a situation similar to mine, that getting through their cancer treatment is possible, and that their life on the other side of the treatment can be better than it was before the treatment.  And I hope that we continue to focus our resources and efforts on helping to make life better and easier for people who are dealing with cancer, because having help from people who care is what gives us the strength to put our heads down and keep going.