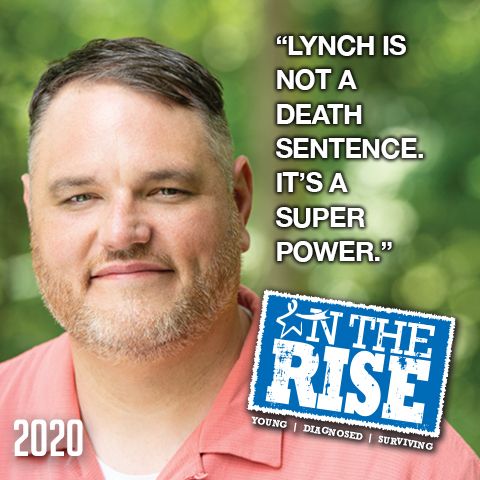 Fortunately, our family GI doctor suggested I get colonoscopies starting at the age of 20 and every five years after due to family history. That decision is eventually what saved my life. During my second colonoscopy, they found a large polyp and told me to come every 3 years. Each of the next three procedures came with polyps, but no cancer. Scheduling those procedures was difficult because I was under the age of 50, and the reason I didn’t get a colonoscopy at age 37. I tried to schedule it, and the new GI doctor’s assistant kept telling me I was too young. My PCP sent over paperwork, and I still got the runaround. I was so fed up and drained. I didn’t want to go through it again, so I put it on the back burner. On Thanksgiving of 2016, I noticed my stool was black and looked like tar. I knew right then I had cancer. I made my appointment with a GI doctor a week and a half later. After my procedure I was told those three words. You have cancer!

I called my parents, but my dad was not home. My mom was devastated and said she’d have dad call when he came home. Later that day my dad called. “Hi Dad.” No hi or hello back. Instead I get, “Welcome to the club mother#&%#*@.” I laughed out loud and thought, “Did he really just say that?” That phone call helped determine my mindset on overcoming cancer.

Later that night, I told my wife I didn’t want cancer to affect who we were as a family. I wanted to inspire people. I wanted people to look at us and say, “Wow! If I ever have to go through cancer or something like that, I want to be like the Birrens.”

The doctors planned on a total colectomy pending the results of my genetic tests. The results came back positive for Lynch Syndrome. January of 2017, I had the total colectomy. After surgery, we found out the tumor had perforated the colon wall, and I was given a stage IIIb diagnosis. I ended up doing seven rounds of chemotherapy.

I would wear a different humorous t-shirt for every chemo session, and the nurses would come out into the waiting room to look and see what my shirt said before I was even called back. It was a way to inspire people throughout this journey.

I’m a chef instructor at a technical college outside of Milwaukee. By using my winter break for surgery, I only missed three days of work from my diagnosis date to today. Many days I wanted to stay home in bed, but I would force myself to go walk the track at the gym and then head to work.

Educating and advocating about colorectal cancer and Lynch Syndrome have become two new passions of mine. My sister and brother both tested negative for Lynch. Next will be our 13-year-old son and we will test him at 16. If negative, then it dies with me. If positive, he can live a long life with routine monitoring. I tell him Lynch is not a death sentence it’s a superpower.

When my father called me in the beginning and welcomed me to the club, I thought “this is a club I never wanted to be a part of.” Truth be told I wouldn’t change my journey for anything. It has changed the way I take on life, and I feel honored to be a member.