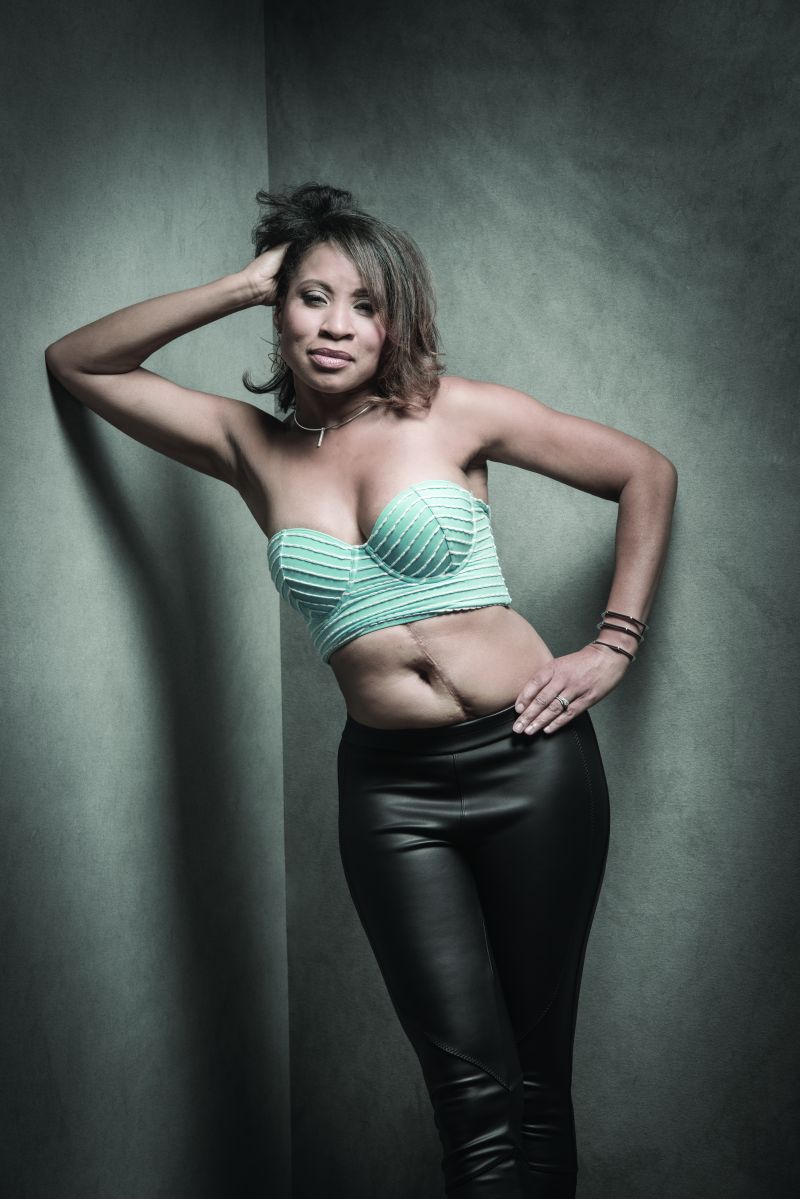 A charismatic, resilient, native Chicagoan, Evelyn Keener is a 49-year-old gifted writer, poet, and speaker now living in Atlanta. In 1979, at the tender age of eight years, her world was rocked when she noticed blood in the toilet after a bowel movement. Frightened, she screamed for her mother. Although her mother looked scared, she wasn’t shocked. She knew Evelyn’s biological father had Familial Adenomatous Polyposis (FAP).

Today, Evelyn is a colorectal cancer pre-vivor and an ovarian cancer survivor. She has been with her soulmate, Johnnie, for 10 years, married for three.

Evelyn lives life with purpose. Her motto: You are not built to break.

You were raised by your mother and stepfather. What did you know about your biological father’s FAP?

It wasn’t until I was a teenager that I knew and understood what the Familial in Familial Adenomatous Polyposis meant. My father underwent colonoscopy, pre- screening, biopsies, and ultimately, at the age of 10 was left with a permanent colostomy.

How did your FAP diagnosis change your life?

As an eight year old, things were happening that I didn’t understand. I didn’t have a voice. Things happened to me. As an adult it’s an understanding of my own mortality and that I have to live every day with purpose.

How did it change your family?

For my mother, she had to put me first before her husband and my sister. I’m sure that was hard for her to balance. For my sister, she went from being my sister to my protector and second mother. It’s a role she still embraces to this day. For my husband, it’s understanding the reality that this is a life-long condition and that this could be fatal.

After your colectomy you had a temporary ileostomy. How hard was this to deal with as an eight year old?

I don’t really remember everything now. My mother says I was in the hospital for a couple months after the surgery, and by the time I came home I was comfortable with it and I handled it very well. What I do remember is my mother and sister helping me a lot. At school my sister, who was 11 at the time, would come to my classroom and make sure I was emptying it. However, having it made me feel weak at times.

Were you able to resume a “normal” childhood after your temporary ileostomy was reversed?

How did you learn about your ovarian cancer?

I always had ovarian cysts. Two months after my wedding, I experienced debilitating pain in my lower abdomen. I made an appointment with my doctor, but decided to go the ER instead. Once there they did scans and tests and found tumors on my ovary. I was diagnosed with stage 0 ovarian cancer. It was caught early. I had a hysterectomy.

You say you’ve had 10 to 12 major surgeries in your lifetime, too many to list. Did these surgeries go smoothly or did you experience complications?

Prior to surgery, they always sit you down to discuss the possible complications. Whenever they would tell me something that only happens in 1 percent (or whatever low percentage) of people, I know that’s going to happen to me. I am always going to be in the 1 percent with complications happening to me, and you can bank on it. I realized after my fourth surgery, which was the reversal of my second ileostomy that this was going to be the norm for me. I wasn’t the typical surgical candidate.

How did you handle all these complications mentally?

Every surgery with complications I sunk into a little bit of depression initially, but I always come back to “you are not built to break” and I keep moving on. My faith has played a huge role in my life. When I would sink into those small bouts of depression, God always let me know he was still with me. Every time I was at my lowest point, God would show up.

You’re an accomplished writer. Tell me about your books.

I’m a self-published author. My first book is a 30-day devotional entitled Live Believe Dream. The second book, Awaken the Butterfly, is a book of poetry with some devotionals. Both books have sold out of their first editions. The second editions will come out in December 2016 with my third book, which is a 365-day devotional.

You’ve said you have to live life with purpose. What is your purpose?

People are my purpose. I love people. My trials have been for the purpose of helping other people. My ministry is my history. I was born to serve others. I may bend. I may lean. But I am not built to break.