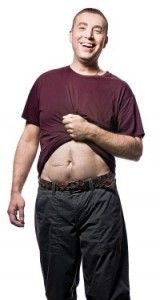 The latter part of 2006 and the early part of 2007 is when I first started noticing the symptoms. I would still classify myself as being active at that time, however I would tire much more easily and I remember spending countless hours having to go to the bathroom. I started having frequent stools that were sometimes loose and also bloody. (When I say that I had frequent stools, I remember for a normal 8-hour shift at work it wasn’t uncommon for me to spend at least half of the shift retuning to the restroom and my co-workers wondering what happened to Eric.) I would think to myself, “This isn’t normal,” but attribute it to something I ate earlier that day. Then I would take some medicine to resolve the situation. When that didn’t help, I knew it was more serious, but I kept trying to convince myself that over time it would get better. It didn’t.

The first people that I went to concerning my symptoms were my parents, in part because I was living with them at the time and also because they had experience in the medical profession. If they couldn’t get the answers, they knew others that could. So they assisted in setting me up with an appointment to see a local doctor who my dad knew. The initial exam started with an evaluation, and then a physical. After that, they took a series of blood tests and some stool tests. They eliminated C-Diff as being the cause of the symptoms, but in the meantime I was still experiencing all the problems I mentioned earlier. Finally, the gastroenterologist ordered a colonoscopy. I remember that the prep was the worst part of the whole procedure, but the procedure itself was painless.

The colonoscopy was on April 30th, 2007. In the recovery room I remember waking up and seeing my family and loved ones along with Doctor Hecht, who performed the procedure. I could tell by their demeanor and the expressions on their faces that something wasn’t right. Why would they be ordering another test like a CT scan right away? I heard the term ulcerative colitis mentioned and thought that was what had been causing my trouble. I went along without much thought about the disease. On May 2, 2007, Doctor Hecht came to our home. I remember thinking he was there to discuss my dad’s health problems, but soon found out that he was there to give me my results. Why wasn’t he able to call us over the phone or send them in the mail? He was there to tell me face-to-face, along with my parents, the results that would change my life forever. My diagnosis that day was stage III colon cancer. I was devastated, but I didn’t know how to react. My body turned numb and I had an ill feeling inside, but I knew that I still had to try and lead a normal life. I called my girlfriend and she was as devastated as I was. The timing of the doctor’s visit really couldn’t have been worse, since it was in the evening and in a matter of hours I would be leaving to report for duty as a security officer. My mom asked if I would be able to go in that night and to this day I’m not sure how I made it, but I did. Questions were racing through my mind on my way into work like, “How do I break this news to my boss?” and, “How will my job be affected?”

From that time in May, to late December of 2007, my schedule was filled with endless visits to doctors’ offices, some of which were almost an hour away. My mom was a big help in getting drivers lined up that would take me to the appointments when she was unable to. My first appointment was for an ultra-sound, which turned out to be one of the most painful procedures I remember having. That very same day, they ordered an MRI at a facility nearby and I didn’t know how much more my body could handle. After that we met with the oncologist and radiologist. It was the start of a summer full of chemo and radiation – 6 weeks straight. I thought I would be able to work through my treatments but they wiped me out completely. I was unable to do much of anything after my morning appointments, but to come home and watch television.

There was a break between my treatment and the first surgery that was scheduled right after Labor Day. The surgeon, Dr. Gemlo, took out almost a foot of my colon and then I was left with a temporary ostomy. In November, I had my second surgery in less than 3 months to reverse the procedure they had done in September, and to take away my ostomy. The surgeon did say that he considered me “cured,” however he also said it would take up to a year for my body to be healed. To this day I experience problems unexpectedly when I eat something I shouldn’t have. As a result I have had to make some lifestyle changes. I have changed my diet and exercise more, so that I can reduce the risk of recurrence.

If I have learned anything from this experience, it is that you can’t take things for granted, and there is always a reason for something to happen, even though we may not always know why. I encourage others to get tested because early detection is the key to preventing others from a more serious form of cancer. What if I hadn’t gone in when I did? It could have been a lot worse than stage III. Now, whenever I look down and see my scars, it’s a reminder of how God brought me through this and for the time being I’m NED – no evidence of disease.