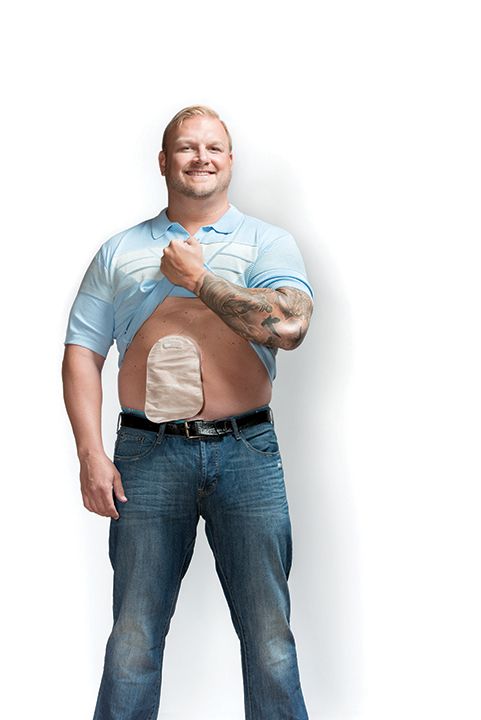 Ed Yakacki III has one of the most endearing and naturally charismatic personalities you will ever find. A southern New Jersey-born native, this 36-year-old has the accent and disposition that make him authentic. He’s a big guy with big tattoos … and an even bigger heart. Meeting him in person, it’s hard to imagine he was ever bitter or felt sorry for himself about his stage IV colorectal cancer diagnosis. It’s understandable, though, as Ed suffered great personal loss and cancer took him to a very dark place in his life. Fortunately Ed’s life is now happy and fulfilled. He’s even become an outspoken advocate for colorectal cancer awareness. This big guy is going to do really big things for the cause — he already has.

Ed didn’t tell anyone at the time, but remembers having bathroom issues throughout his twenties. He experienced extreme bouts of constipation and diarrhea. Given he was an athlete who lifted weights and played sports, he told himself it was just strain from all the activity. He chalked up the bleeding he experienced as hemorrhoids and continued an active lifestyle for many years. At one point he could even bench 500 pounds. It’s easy to see why Ed wanted to believe there was nothing wrong, especially since his doctors agreed. Unfortunately the symptoms continued and became much worse.

In 2008, Ed remembers trying to go to the bathroom at work at least 30 times a day. He was afraid to eat because he dreaded going to the bathroom, and lost 40 pounds in the process. Stool tests came back normal, so Ed pushed on as things continued to get worse. It’s ironic that one of the worst nights he ever experienced was the same night his Philadelphia Phillies won the 2008 World Series. Ed was 30 years old at the time and had such extreme diarrhea and pain that evening, he was hysterically crying by the time he called his father for help. Ed is very fond of his father and grateful for all he has done. His dad took him to the ER that night, then to his colonoscopy that was scheduled a couple months later. A scan in December found a tumor and Ed felt his whole life flashed before his eyes. Ed was no stranger to cancer. His mother died of stomach cancer when he was 22.

Ed endured many more obstacles of pain and suffering over the next year and a half, including a cancer mass found in his liver, a bleeding abscess caused by radiation, chemotherapy that made him very sick, and several surgeries. Top this off with an eventual permanent ostomy and a marriage that couldn’t take any of it, and you understand why Ed went through a lot of really tough times. Cancer cost him a lot – including his marriage. But the most amazing thing about Ed Yakacki’s story isn’t about what he went through or lost, the most amazing thing about Ed is how he turned things around

The turnaround first started when Ed met Amanda, a Special Ed teacher he was instantly attracted to because of her positive outlook on life. Amanda encouraged Ed to stop feeling like a victim. She said, “People need to hear your story. You can inspire others to not give up.” One of Amanda’s friends suggested they participate in a colorectal cancer walk in Philadelphia; this is where Ed’s advocacy began. He ended up taking his shirt off at the event to proudly show his ostomy and people thanked him for it. Ed felt empowered. He has now completed several walks and it’s his trademark to wear a blue bandana, bright sunglasses and a T-shirt that reads, “I am Brave, I am a Fighter, I am a SURVIVOR.”

Ed is a natural-born advocate. He’s been on TV, written up in several articles, participated in Call on Congress in Washington D.C., and spoken to survivor groups where he even received a standing ovation. He doesn’t care if he’s perfect or polished, he cares about delivering an honest message of hope to others. “If I touch one person, I’m making waves.” Ed is proving this to be true. After appearing on a local TV program, someone called the station and wouldn’t hang up until they knew how to get a colonoscopy. Ed is succeeding in his mission of spreading the word and helping others. And all this from a guy who, at the darkest time of his life, wasn’t even happy when he was given a clean bill of health. Someone who turned that darkness completely around and now says, “Every time I put someone at ease, it puts meaning to my suffering. And I suffered a lot.”