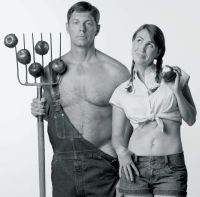 Dean Brusie has always been conscious of how he treats his body, and colon cancer reminded him just how important that is.

Dean felt fine, but when he tried to donate blood, tests showed that he was anemic. His doctor gave him a colonoscopy and was shocked to find two tumors and dozens of polyps. Surgeons removed all but two inches of Dean’s colon. Even though he spent years conditioning his body in the military and played sports regularly, Dean was diagnosed with stage I colon cancer.

Dean continues to take care of himself by working out and eating well. He knows that “an apple a day” is just one part of a balanced and healthy lifestyle.

DEAN’S STORY AS TOLD BY DEAN:

I graduated from high school in 1975 and worked on a farm for a short time, then in a hospital for a few years before joining the military in 1977. During my years in the Army, I was a regular blood donor, and have been for about 30 years. In May of 2005, I gave blood but when I went to give blood in August, I was told by the Red Cross technician that my iron count was too low. I asked what that meant and he said that I couldn’t give blood that day and I should change my diet. I asked what else I could do and he said, “Maybe see your doctor.”

I felt fine, was active in sports and was always careful with my diet. I went to the doctor for a physical and informed him about the low iron. As part of my physical, the doctor did three stool samples and all three came back positive for blood. So they decided to do a colonoscopy. My doctor said, “We usually don’t do colonoscopies until age 50, but we’re going to do it for you.” So I got a colonoscopy and they found two tumors, one of which the doctor was positive was cancerous, as well as many polyps. I was surprised. I had no symptoms. Everything seemed normal. I didn’t feel tired; I didn’t have bleeding.

The doctors decided to do a total colectomy; “We have to take the whole colon out,” and I said, “Get the specialist, and let’s go for it.” My whole colon was removed except for the last two inches, but I feel so fortunate. I was diagnosed at Stage I, so I didn’t have to have radiation or chemo. I was giving blood to help save lives and the act of giving blood saved my life.

To me, there are a lot worse things than having cancer. Having surgery for colon cancer saved my life and is somewhat of an inconvenience because I have to go to the bathroom many times throughout the day; but other than that, it’s not so bad. Figuring out what to eat is the hardest part. My body doesn’t digest the way it used to. I try to look on the bright side – I could be worse off. It’s not a handicap; it’s just an inconvenience. After I was diagnosed and had surgery, people treated me like I was incapable of doing things, but I went back to work two weeks after surgery, I am playing indoor soccer, working out and doing some running.

Life is strange sometimes. One of my best friends is a Marine; he called me the day I found out I had cancer and he stated he had some news to pass on to me, and I told him I also had news. “You go first, he said,” and I said, “I have colon cancer,” and he told me he had prostate cancer and we’re both still here today. I also work with someone whose wife died of cancer and the first thing he told me when I told him I had cancer was, “You know, it is curable; not all cancer is a death sentence.”

What is cancer brought on by? It’s not the way I live my life or what I eat. I keep telling my boss that it must be stress! How can I have 50 polyps and my 80 year-old father only have one?

Due to the large number of polyps they found (they stopped counting at 50) I had to undergo genetic testing for FAP (Familial Adenomatous Polyposis), and they were expecting me to have the gene; but I didn’t. I have 5 siblings, but only one sister has been screened; she’s 51. My parents get regular screenings. My children will not have to face screening until they reach 38 years old, but they will have to be screened early.

I knew cancer could affect anyone. It’s just like driving down the road; you can take every precaution and someone else can hit you. Nobody’s above it. My neighbors always say, “How did this happen? You’re the healthiest person in the neighborhood.”

While in the Army I traveled to Germany, Alaska, Greece, Korea, Texas, Indiana and Georgia, but I spent about half my time in Virginia at the Pentagon. I was working in the Pentagon on September 11th when the plane hit and I felt fear but it was nothing compared to the news of having to face cancer. After the plane hit I could see an escape route; with cancer I felt all was lost, but through time and education I understood it and beat it! I lost eight co-workers in the Pentagon on September 11th and when the plane hit you could feel the building shake and I could see pictures falling off of my walls. It was controlled chaos trying to get out of the building; many people were crying and you could see the fear in everyone’s eyes, but everyone was helping each other. That fateful day it was people helping people, and everyone pulled together as a team.

My follow-up is bloodwork and a CT scan every 90 days for the first year. I go talk to the oncologist and I follow up with her; she is my main care provider now. She makes recommendations, like take iron tablets because I’m still working on anemia. I’ve talked to the surgeon and doctor about giving blood again, but they haven’t given me an answer yet. They say maybe after five years, when they consider me cured.

I would like to thank the Fort Belvoir Hospital and its staff for diagnosing me, The Walter Reed Army Medical Center colorectal doctors and specialists for the operation and recovery along with the Oncology Department for sustaining my life for my family. I would like to also thank everyone who was associated in the planning and execution of the 2007 Colondar, “You all rock” and I feel truly blessed.