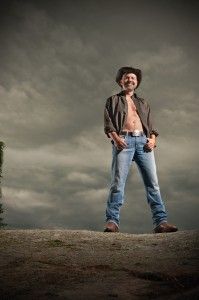 I tell my wife that she should trade up before she has to.  As the wife of a three-time cancer survivor, she really enjoys my humor.  It’s much harder on her than it is on me.

Robin and I met in college at Tulane University.  I was the frat boy and she was the sorority girl, but we weren’t stereotypical.  Even with the New Orleans atmosphere, there was always something else there.  Somehow we made it through four years of beignets, crawfish, and too much alcohol, and stayed together to marriage.  At 26, we finally married, and had our first son at 28.  First child, new business issues – lots of stress.  So when I started having cramps and bleeding, it didn’t occur to me that it could be cancer, even with my family history.

My grandfather had colon cancer, ultimately having a colostomy but living well into his eighties.  My father had colon cancer in his forties, but he had symptoms such as losing weight and having no skin pigment whatsoever.  I was still a solid 200 pounds, worked more than a full schedule, and was playing soccer.  I visited my primary physician who misdiagnosed me even though the family history was listed on my chart.  He didn’t do a rectal exam, and recommended that I take some over the counter stuff like Preparation H and Tums to control the ulcerative symptoms. A few months later, after symptoms hadn’t subsided, I went to a specialist who told me the news.

We made a few calls and found a highly recommended GI doctor at Mt Sinai, Blair Lewis. He confirmed the results and Brian Katz performed the surgery.  Laparoscopy wasn’t around then, so the surgery was pretty intense.  I woke with a pretty sizable scar and feeling buckled-over pain in my abdominal area.  I couldn’t hit the morphine button fast enough on the IV pole.  After five days, I was released but I had 6 months of chemo, as the cancer had spread to at least one of my lymph nodes.  My chemo regimen used to be weekly on a Friday. I would take off from work, get hooked up to the IV, and spend the next day and a half incapacitated.

Robin and I debated over having more children, knowing the percentages.  Ultimately, we agreed to have more children.  Four years after Dubin #1, Dubin #2 came.  By now, I had left the old family business and started an Internet venture, which briefly relocated the family to Florida.  The Internet sector tanked around 2000, and since our non-competes were over, we re-started the family business once again in Jersey, taking back our previous clients.  We moved into house #2 in Haworth, NJ.  Once cancer-free for 5 years, cancer was becoming a bad memory for me, but my older brother Bill was diagnosed at age 37.

On May 1, 2007, I went to donate blood, but they found my iron count so low, that they were practically ready to give me a transfusion.  Even though it had been less than a year since my last scope, they recommended I contact my GI doctor right away.  Since I have Dr. Lewis on speed dial, I reached him quickly and I had a scope done.  It confirmed another tumor, which freaked everyone out since it came and turned so quickly.  Surgery was scheduled for just after Memorial Day, and I was put on a heavy iron regimen. Brian Katz performed the surgery once again, this time laparoscopically, and as expected, it was cut and dry, so to speak.  No blood was needed, minimal scarring, minimal pain, and no chemo needed after.  I had genetic testing done at Mt Sinai, and surprisingly I was found to be at risk for colon cancer.  I have HNPCC or Lynch Syndrome, which is prevalent in less than 5% of all colon cancer patients.  Lucky me.

I decided to start seeing an oncologist.  I don’t really like having an oncologist, but staying vertical is important, so I made the commitment.  He recommended a battery of tests that made me glow in the dark. In September 2008, after having my annual scans of chest, pelvis and abdomen, spots were found on my liver, which isn’t a good thing.  So an MRI was taken to focus on the liver. As, I’m coaching a soccer practice, I received a phone call from my oncologist.  He starts by saying “I have good news and bad news.”  The good news was that the liver was in fact clear, but a small tumor was found on my right kidney.  An MRI was done focusing on the kidney, and the decision was made to have it removed in February 2009, after a planned trip to Mardi Gras.  It could stay there for years without getting worse, but since I was theoretically young at 42, a partial nephrectomy was performed at Mt Sinai once again.  Although Brian Katz did not do the nephrectomy, he did scrub in (third surgery was free), and got past the scar tissue quickly so Michael Palese, the kidney doc, could get in and out.  Once again, minimal pain, minimal scarring and no chemo.  10% of my right kidney is now gone and so far, no issues.  They say it’s a primary tumor and unrelated to the previous colon cancers, but it is related to the HNPCC.

2010 was the first year in several with no surgeries.  All the scans and scopes were clear.  I had my first mammogram.  I think the tech had fun with me as she put some weird clips on my nipples.  I pretended to be Belle Starr.  My oncologist has brought up the idea of having a colostomy.  I’m not ready to become one of my own patients yet.

As a parent, I fully understand the angst my father feels knowing that his sons have his cancer.  The math is against my boys as well.  I worry that one day I won’t beat it.  I want to be remembered the way you see me in the picture, alive and kicking.