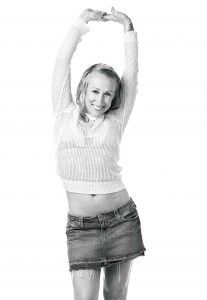 In September 2006, only a few months after graduating from Rutgers University, starting a full time job and moving out of my parents’ home, I began experiencing sharp stomach pains and severe abdominal cramping. Toward the end of October, I decided to see my general practitioner about the stomach pain. He initially ‘diagnosed’ my pains as gas, and then as menstrual cramps, and then suggested lactose intolerance. Although he was unsure of the cause of my pain, he did order blood work, saying that I looked pale.

The blood work results showed severe anemia- my count was 6.2. My doctor insisted that I go directly from his office to a hematologist’s office, which was located a few towns away. Reluctantly, I called my boss and told her that I would need to take the rest of the day off. I got directions from my GP and drove myself to the hematologist. The hematologist did more extensive blood work and gave me an iron supplement to take 3x a day. After a few follow up visits with him, my iron counts remained low and I continued to experience severe stomach cramps.  He told me to do a fecal occult test at home and he had his office staff schedule an appointment for me to see a gastroenterologist . The first available appointment was toward the end of December. I put the fecal occult blood test strips in my bag and went back to my daily activities. However, as much as I tried to ignore it, the stomach pain continued. I tried calling the gastro’s office for a quicker appointment, but they were booked. So I waited.

I was visiting to decorate the Christmas tree

On December 16, 2007, I went to visit my parents who lived about an hour away to help decorate the Christmas tree. I stayed at my parents’ for the night and by the time I woke up in the morning, I was in so much pain that I could barely get out of bed. My parents convinced me that a trip to the emergency room couldn’t hurt. After some hesitation, I went to the ER of the local hospital. I explained to the ER doctor about my stomach pain and recent anemia diagnosis. He ordered blood work, which confirmed the anemia and he immediately ordered a blood transfusion. The second test he conducted was a fecal occult blood test (yes, the one given to me by the hematologist was still in my bag). The result showed blood in my stool, although I had never seen, or looked for, it. I was admitted to inpatient because of the blood transfusion and the doctors continued to conduct tests.  Within a day a half, I had a series of CT scans, a barium enema, an endoscopy and a colonoscopy. A tumor was found in my large intestine and the biopsy revealed that the tumor was malignant. Colon resection surgery was scheduled for December 22, 2006. Everything happened so fast. One day I was decorating the Christmas tree with my family and literally a few days later, I was diagnosed with colon cancer and being prepped for surgery. Needless to say, this week was a whirlwind of surprising and scary news for my entire family.

Surgery was done laproscopically and lasted about 7 hours. When I woke up and was able to speak with the surgeon, he explained my tumor as big, ugly and growing into my intestinal wall. Because of the size, location and aggressiveness of the tumor, he removed my entire colon, my appendix and a large number of lymph nodes (which all came back negative!). Although surgery went well, I was in a lot of pain because I developed an infection and gas began to build in my abdomen. To treat this, the doctors ordered an NG tube, which I think was the most painful and uncomfortable part of my whole hospital experience. Despite my discomfort, the doctors urged that I leave the tube in place. Hoping that it would decrease my pain, I agreed to do so. Unfortunately, after having the tube in place for 3 days, I was still extremely distended and a CT scan came back showing that the tube was coiled up into my esophagus- so it had not done any good after all. Eventually, after days of walking lap after lap around the unit’s hallways, the distention and my pain began to decrease. During my time in the hospital, I met with an oncologist who recommended chemotherapy:  12 cycles of 5FU/ Leucovorin/ Oxolyplatin to start in January 2007. I was released from the hospital on December 31, 2006 at about 7pm. Happy New Year to me!

I returned to my parents’ house, where I continued to recover from surgery and get ready to start chemo. Despite the urging of my parents to move back in with them while I was receiving chemo, I was determined not to let cancer keep me from moving forward with my life. I was adamant about continuing to live on my own and taking care of myself. I needed to maintain my independence. Once I was healed enough to drive, I returned to the house that I was living in, with two roommates, about an hour south of my parents’ house. I attended a consultation with an oncologist in my area who had the same treatment recommendation as the oncologist that I met with in the hospital. I had a port put in and chemotherapy started in mid-January 2007.

Hiding my chemo pump in my hoodie

Chemo was tough on me, physically and emotionally. I drove myself to the oncologist’s office every other Monday to receive 8 hours of treatment in the office and then I would drive myself home, with my IV line hanging out of my port and taped to my chest. My home care nurse would meet me at my house in order to connect my 5FU pump which I wore continuously for the next two days.  I remember the first time she connected the pump and handed me a little pouch that I was to carry the pump around in. All I could think is “you’ve got to be kidding me.”

The pouch went into the garbage and my go-to wardrobe during chemo was a hoodie. I would run the IV from my port, down and out the bottom of my shirt and the pump was kept in the hoodie pocket. Much better than a pouch!  As much as I hated chemo, and believe me I hated it, I was extremely lucky to have such caring doctors and nurses working with me. I was not an easy patient.  I could not wait for Wednesdays to come so that I could be disconnected from my pump. I would beg my home care nurse to make me her first stop of the day, even though that was not the way she was scheduled.  She did her best to get to me early in the day and although I may not have shown it at the time, I appreciate how good she was to me and how sensitive she was to my needs, and my wants. I was miserable during my “on” weeks- cranky, nauseous and had terrible neuropathy. I  wanted  to quit treatment before my 12 rounds were completed, but with the support from my family, friends and treatment team, I completed my 12 rounds of chemo by the end of July 2007.

I was moving forward with my life

had scans and colonoscopies as scheduled for the next few years, all with great results. I returned to work, began attending graduate school and completed a Masters Degree in Social Work. I was married in May 2009 to a man that I have known and loved since preschool and in July 2010, we were blessed with a beautiful and healthy baby boy. I was moving forward!

After giving birth to my son, some of my hormone levels were not returning to normal. Blood work showed that my Prolactin was too high and my doctors were unsure of the cause. My gynecologist suggested that I see a specialist and I thought, “here we go again.” I told my friends, co-workers and family I knew something was wrong. Something in my body was just off and I had terrible suspicions as to what it was.

So I went to a specialist who found a cyst in my uterine lining. He explained that a simple surgical procedure could remove the cyst without a problem. He explained that this type of thing is not uncommon in women who have had c-sections, as I did. The procedure seemed simple enough, no incision, same day surgery, minimal discomfort.

A few days after the procedure, I got a phone call from the doctor, not a nurse. Not good. He explained that the biopsy showed that the cyst was malignant (not that word again!) and that I had endometrial cancer.  From there, I was referred to a gynecologic oncologist. A hysterectomy was scheduled for May 16, 2011. The surgery was successful, all lymph nodes were negative and the cancer was contained to my uterine lining which means it was Stage 1 and more importantly, to me at least, meant no chemo and no radiation was necessary!

As of now, it has been just over 1 year since my hysterectomy and almost 5 years since I completed treatment for colon cancer. I am back to enjoying life and love my husband and my son. At this point in my life, I am cancer free, healthy and happy!