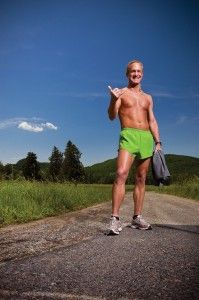 Marathoner Dan Wilson never expected to be diagnosed with colon cancer. Leading a healthy lifestyle was his priority for years. He had completed his goal of running a marathon in all 50 states and was in great shape. When Dan began spotting traces of blood, he assumed it was hemorrhoids. Luckily, he visited a doctor who was proactive and quickly found the cause of his bleeding. At age 47, Dan was diagnosed with colon cancer.

Surgery and chemotherapy worried Dan and he feared he’d lose his ability to run. To prove to himself that he could still do it, he ran a marathon and took the medal to his oncologist the next day while receiving chemotherapy. Three weeks after finishing treatment, Dan ran the Pike’s Peak marathon. His story goes to prove that nobody is immune to colon cancer. Mile after mile Dan inspires cancer survivors to keep going, and never give up.

In His Own Words: Survivor Dan Wilson

I’m a 50 states marathoner and ultra-runner. I’ve run a marathon in all 50 states and I run ultra races – which includes any race over 26.2 miles (like 100,50, mile races ,100k 50k races) Yes I’m a running fool. I always thought I lived a healthy lifestyle, staying in shape, exercising, running, biking, weights. I tried to eat right. But then I got diagnosed with stage 3 colon cancer in Dec. 2005. Wow I was in shock. It couldn’t be happening to me! The big C word is like a death sentence!  I was scared to death.

Here’s my story, it starts out Sept 2005. I was starting to spot blood in my toilet paper, just thought it was hemorrhoids. I was running in a 50-mile race which my brother was running too. I was a least 5 miles or so ahead of my brother, and was feeling very sick all of a sudden. So I sat down for a little bit, than had to use the restroom. I felt like I was constipated. This happened 3 more times during this race. The last time I had to stop. I was so fatigued and my legs were gone, I had to walk the last 20 miles to the finish line.

My brother caught me at that point and couldn’t believe I was walking so we finished together. When I got home, the blood in my toilet paper was getting a little bigger. Still thinking it was hemorrhoids, I ignored it. I then went to Washington, DC to run the Marine Corps Marathon in Oct. My good friend who never beats me in a race beat me there. I was so sick and fatigued, feeling constipated, having to go to the restroom 5 times during that race!

I felt like I needed to ask someone about this. My brother-in-law is a doctor and my sister is a nurse, so I called them up and told them what was happening to me. Right away, they told me to go get checked out, which I did with my family doctor. He saw the blood and got me scheduled for a colonoscopy. The colonoscopy showed I had a 2-inch tumor in the lower part of my colon. I was scheduled for a major surgery 6 days later! I’ve never been operated on in my life and now this! I did a lot of praying!

My two sisters and brother were a lot of help before, during and after – which I needed the most. I will always remember waking up after the surgery with all the tubes  in my body and thinking I will never be able to run or do the things I used to. That thought changed right away when my sister made me start walking that day down the hallway. Wow did that hurt! But it got me motivated to get out of that place.

While I was in the hospital, an oncologist came by to discuss chemo treatments with me. After he got done, he asked me if I had any questions for him. I asked, “When can I start running again?” He dropped his notebooks on the ground and just stared at me with amazement! He told me he’s been waiting 20 years for someone to ask him that and now he can’t answer it. He told me he can’t get his patients to walk for him.

I started my chemo treatments in Jan 2006, and had a port put in my chest for the chemo. I had 48 hrs.  every 2 weeks for 6 months.  About 4 months into chemo treatments I decided to run a marathon in Estes Park, Colorado – a place where it’s hard to breathe. and it was hot in June. I had trouble drinking. Cold water felt like broken glass going down my throat. So I tried staying hydrated with the fruits. I finished the race 6 hours 1 minute and took the finishers medal in to my treatment the next day and showed it to my oncologist.  She just shook her head in disbelief.

I’m going on 6 years now and sometimes I feel like I never had it until I see the scar. It reminds me to not take life for granted and to always get checked. I see my oncologist once a year now. And the evil C word got defeated and can be defeated!! Best of health to all of you!!