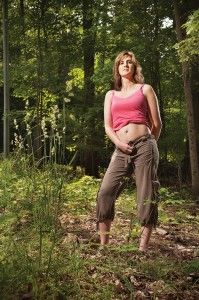 I thank God for colitis. People hear me say this and think I’m crazy, but colitis saved my life. It began, officially, on July 7, 2006 during my son’s 10th birthday party. I had a colitis attack that not only forced me to miss the party, but gave me a three day hospital stay. I say it began officially because I was ignoring symptoms that should have had me seeing the doctor. I knew something was wrong, but I felt I was too young to have anything “seriously” wrong with me. I had blood in my stool for 8 months and spontaneous diarrhea. I work in the medical profession as a CT Technologist and the colorectal patients that I scanned were always elderly. I had no concern that something like colon cancer could have happened to someone as young as I. I never had a colon cancer patient around my age in my facility, and I had no concerns that this was something I needed to be tested for. My former family physician suggested that because I was a young female, that constipation was not uncommon and that I needed a more diet high in fiber. He suggested that this change in my diet would clear up the blood from my stool tests. When I was admitted to the hospital, I was assigned a GI specialist who suggested that I undergo a colonoscopy to make sure everything was normal. The GI doctor also stated that there was probably nothing wrong, but for “completeness” sake I should have one. This was July. By October, when I was still ignoring the problem, my husband had enough. Scott made sure I scheduled my colonoscopy and took me as well. I had a one inch polyp removed from my sigmoid colon, and the doctor assumed it would be benign. The test was on a Wednesday. Friday, I got the call. It was malignant and I needed a bowel resection.

I know more than most “lay people” about medicine because I work in the medical field. In CT Scan, we take pictures of the disease. We understand how it spreads because we have to adjust the scans appropriately. We see these patients every three months, every 6 months, and yearly. We form friendships and we grieve when the fight is lost. This is why I love working in an an outpatient imaging center, we know our patients. It is entirely different when you are now a patient. The people helping me assumed I knew what was going to happen. I was terrified that I was going to die. I was more concerned for my husband and children than for myself.  I had trouble with this concept of having colon cancer and now I had to explain this to my children, parents, family, and colleagues. My youngest son, however, had the most insightful understanding. Cameron told his teacher that, ”Today, the doctor is cutting some stomach out of Mom to get the cancer out and then sewing her back up, She will be home in a few days”. My sons, Parker 10 and Cameron 8 never had a doubt.

I saw my surgeon and was scheduled for a bowel resection. The next week was more paperwork and doctor appointments that I had when I was pregnant. I kept hearing how blessed I was to have had colitis and that it caught my cancer so early .I kept hearing how extraordinary it was that I was so young yet had colon cancer. I did not feel blessed at this point. I felt scared, lost, and angry. I kept working and it was a struggle scanning the patients with colon cancer knowing that I would be joining them. My family was extremely supportive, but I knew of no one else that I could relate to. I was 33 and facing an illness I thought reserved for the elderly.  I was discussing medical leave and chemotherapy instead of Halloween and Thanksgiving. I felt it was unfair to my kids, my husband, and me. I had to refocus and start planning my recovery instead of my demise.

I had my bowel surgery at the same hospital that I work. The staff was wonderful, as I expected. I had lots of support as did my family during my stay. I was walking laps with other surgical patients in my pink bunny slippers and bright white robe given to me by my radiology colleagues. The best news came when the pathology report stated that no residual cancer remained. We were ecstatic! This was the best scenario we could hope for.

I had follow-up rigid sigmoidoscopy twice since in the doctor’s office. This is like a mini-colonoscopy but no drugs…not my favorite. I am scheduled for my repeat full colonoscopy in November.

I had to go on the web to find out that colon cancer is the number two leading cause of cancer deaths in the USA. I now know that colon cancer can strike anyone at any age. I have been trying to get my hospital to acknowledge colon cancer awareness month as they do breast cancer awareness, but it’s an uphill battle. I am hoping the Colondar will help me. I advocate through my work and I never mind sharing my experiences. I sometimes get called up to the med-surg floor to speak to a patient that is nervous. I try and help them with my story and a lot of humor. I tell them the most important thing to remember after surgery is not to sneeze. I tell them that they are not alone, no matter what age they are. That’s the most important thing.