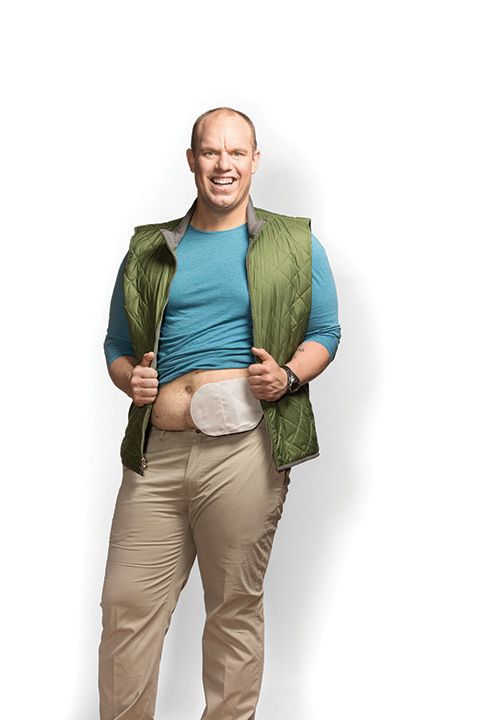 This Canadian is no small man. At 5’11” and 250 lbs., he has a personality to match his size. He could easily be a successful stand-up comedian, but instead is a teacher, an ironman triathlete and author of the blog “Trials of a Big Triathlete.”

In March of 2013, Colin was competing in his 3rd Ironman Triathlon in Los Cabos, Mexico. He was barely able to put one foot in front of the other. It was over 100˚ F, a drastic change from the -40˚ F in his hometown of Edmonton, Alberta. Colin was racing within 48 hours of his arrival in Mexico; not nearly enough time for his body to acclimate. Colin says, “It was the hardest day of my life.” An Ironman consists of a 2.4 mile swim, a 112 mile bicycle ride and a marathon 26.2 mile run, raced in that order and without a break. The swim began with huge swells that threw the participants back out of the water, so they dove back in and began again. The bike course was hilly and windy. Colin quickly sweated off his sun screen and he could feel his skin burning. Instead of water stations at specific mile markers like he was used to, water was available all along the course. Drinking too much water bloated him. People with hoses were spraying runners to cool them down. When Colin stopped to be sprayed, his shoes became water logged, and once they were wet, they were squishy and heavy. Physically and mentally, defeated Colin could barely keep moving, but everywhere he went he kept hearing the Mexican spectators shouting to him “ANIMAL, ANIMAL!” He thought, “Everyone in Mexico thinks I’m an animal!” He never rested, never stopped moving his feet and finally finished in 15 hours 51 minutes. After the race when Colin ran into a Mexican friend, he explained what happened. His friend laughed and said, “No, man, they were saying ‘Animo’ which means just keep going.” Literally translated it means “I encourage” and it did exactly that, it lifted his spirit. This awful, “worst day” of his life prepared Colin for his journey with cancer.

With the goal of completing 12 Ironman triathlons to qualify for the Ironman World Championship in Kona, Hawaii, 33-year-old Colin was training for his 8th Ironman in November of 2014 when he began experiencing constipation and acute abdominal pain which led him to the emergency room. A CT scan and colonoscopy showed a large mass in his colon. His doctor told him it might be cancer and that he needed surgery. In addition to a resecting his colon and creating a colostomy, surgeons removed 45 lymph nodes, which appeared to be cancerous. Biopsies confirmed all 45 were positive, and with two tumors on his liver he was diagnosed with stage IV colon cancer.

Colin’s attitude is similar to that of a successful stand-up comedian. He sums up this post-surgery time with these words: “I awoke a few hours later, disoriented with a large scar up my abdomen and a colostomy bag. Forty-eight hours earlier, I had just completed a training run and now I was laid up in a bed with a tube down my throat, a catheter in my junk and was pooping in a bag. In the words of the immortal Ron Burgundy, ‘that escalated quickly.’ I mean that really got out of hand fast.”

Colin’s wife of 12 years, Kim, has been his rock. Together they have four children ages 9 months to 6 years; the youngest was just 3 weeks old when Colin was diagnosed. Kim and Colin have an amazing ability to look for the positive in every situation. They also have a huge support system. Colin says, “The outpouring of love is almost to the point of being embarrassing, but we are very appreciative of all our supporters.

Passionate about raising awareness, Colin created the #cancercanthackett tour. Sponsored by the Alberta Cancer Foundation and the Canadian Cancer Society, the tour promises to reach tens of thousands of people. As a teacher, Colin is an experienced public speaker, and coupled with his stand-up comedian talents, he is the perfect man to travel across Canada speaking to groups about cancer screening and prevention.

In July 2015 Colin attempted his 8th Ironman but was unable to finish. His training was cut short due to complications with blocked bile ducts, his liver not working properly and having just received chemotherapy three days prior to attempting the race. Disappointed but not deterred, Colin hasn’t given up on his dream of competing in Kona and has already scheduled his next Ironman.

He is determined to “Animo” … just keep going!