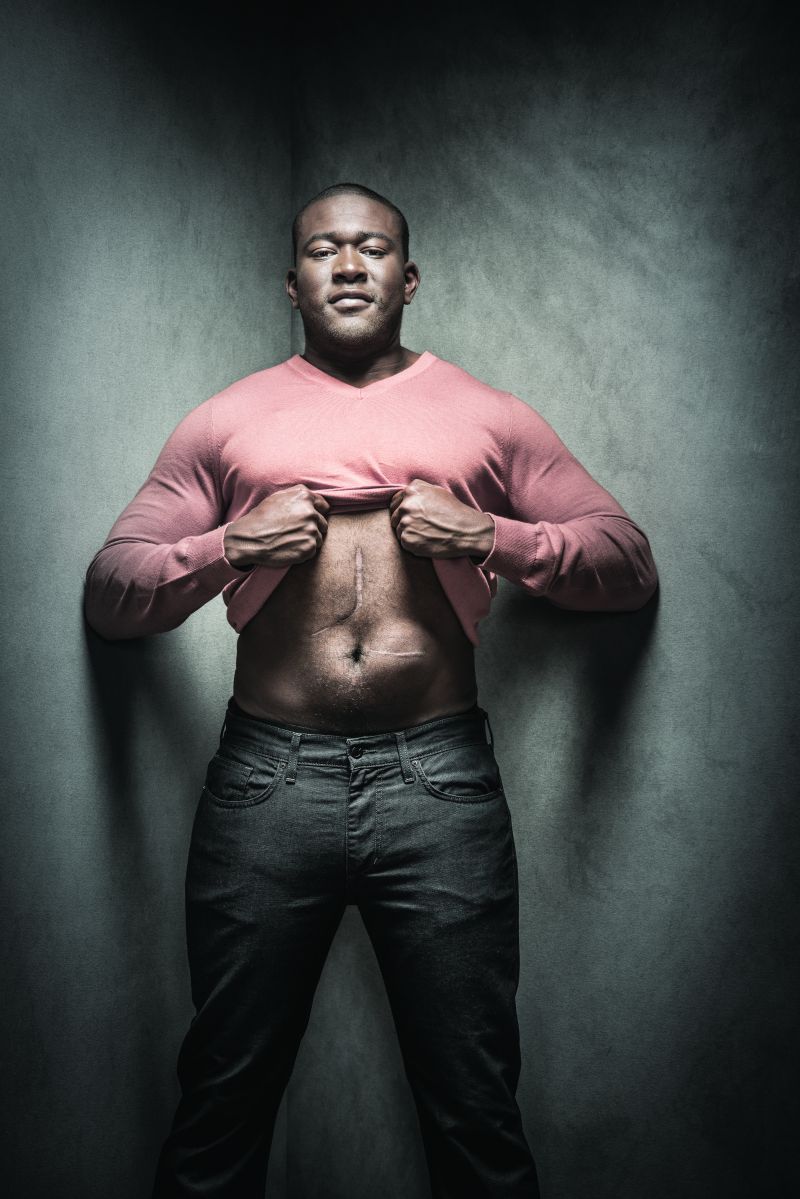 Chris Roberts was 29 years old when his realized his life had changed forever. A graduate of Morehouse College , in Atlanta, and The Fuqua School of Business at Duke University, in Durham, N.C., he had recently moved to New York City to work on Wall Street. But the move was just the beginning of his life’s transformation.

Starting a new job in a new city was stressful, and Chris attributed his drastic weight loss (25 lbs. in two months) to the move . But once he was able, he decided to visit the in-house health clinic in his office building. He told them the symptoms he was experiencing, and they referred him to a internist at New York University, who examined him and noticed his liver was enlarged.

From there, things moved quickly. An LDH blood test came back elevated. A liver ultrasound showed tumors all over his liver. After Chris’s girlfriend Googled the LDH test results, she booked a flight from Ohio to come be with him. That’s when it hit him something could be dangerously wrong.

“In a matter of three weeks, I went from working 70 hours a week and enjoying New York City nightlife to having a chemotherapy port, starting chemotherapy, and applying for disability. All at 29,” he recalls. “I went from believing that everything was validated, everything happened for a reason, to having a cancer with an average patient age of 70! This was when I knew it was real. My life had changed forever.”

A PET scan revealed the primary tumor was in his colon. A colonoscopy showed it was a walnut size tumor— amazingly not obstructing the GI tract. A plan was made for resection surgery within 30 days.

Calling his parents, Chris says, was the hardest part. How could he tell them? He felt guilty that he wouldn’t be the self-sufficient person he’d always been before. But Chris’s dad stayed calm after hearing the news. He asked right away if he and Chris’s mom could come to New York, and they flew out to be by his side. And Chris’s girlfriend moved in with him to help while he continued his treatment.

Chris went to Memorial Sloan Kettering Cancer Center, in New York City, and they developed an immediate plan to hold off on the surgery and try chemo to see if they could shrink the tumors on the colon and liver. After chemo treatment, Chris’s doctors decided to use the HAI pump procedure to help reduce the liver tumors even further.

Chris reached out to other Colon Club survivors to get more information about the HAI pump procedure. He gained perspective and knowledge along with support. The end result of the procedure was good news. The chemo treatments shrank the colon tumor so much, he didn’t need a colon resection after all. Instead, Chris had his gallbladder removed in order to have a HAI pump surgically implanted in his abdomen, so chemo could be pumped directly into the liver tumors. The plan now is that he’ll eventually have a liver resection to remove any tumors that chemotherapy doesn’t take care of.

Though Chris can’t do certain exercises with the HAI pump, he rides a bicycle to stay fit and energized while on treatment. Every three months, he has checkups and chemo. Since his treatment began and his HAI pump was implanted, Chris has been re-evaluating his priorities. He feels called to give back to a cause that matters. He still loves his job, but wants to do more advocacy work with colorectal cancer (CRC) survivors.

“Over the last seven months, I have done a lot of praying, self-reflection, reading, and destressing. I’ve also changed a lot about my life. I don’t eat red meat. I don’t drink alcohol. I exercise 5-7 times per week. I’ve become very deliberate with all of my actions, while also realizing the benefits of being spontaneous,” Chris says. “Now I truly understand the concept of treating your body like a temple. In my prior (pre-cancer) life, I just compared my actions to others. I didn’t eat as bad as him, I don’t drink as much as her, I’m only 15 lbs. overweight. My mindset is now that we are the only ones with ownership and control of our bodies and what we do to them. I don’t know what caused my cancer, but along with faith and prayer, I’m doing everything in my power to heal my body.”