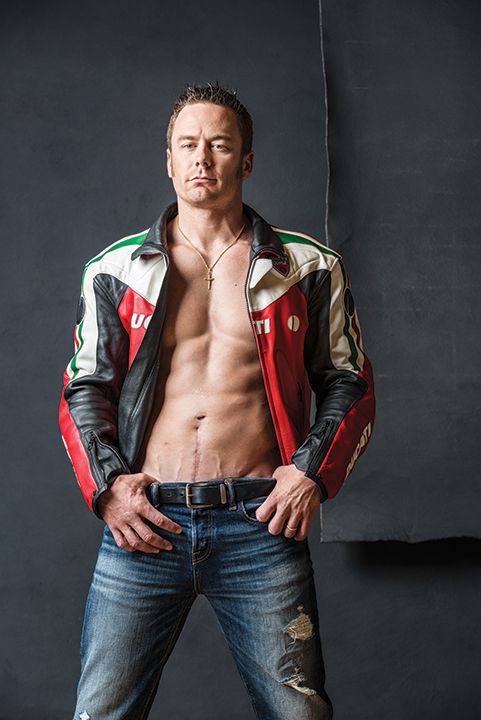 One look at Chris Ganser’s photo and it’s obvious that he is in excellent physical shape, and not just for a cancer survivor. Chris isn’t in such great shape because it helps him as a personal trainer and strength and conditioning coach. It’s more than that. Exercise is a passion for Chris. It’s a passion that helped him make it through cancer, and now, two years removed from treatment, it’s a way to help him inspire others.

Chris began his vigorous exercise regimen when he was diagnosed at 24 with rheumatoid arthritis, a disease that, like colorectal cancer, struck Chris at an early age. There is no cure for rheumatoid arthritis. However, Chris agreed to try an experimental drug, and much to the astonishment of his doctors, he was cured. Chris had begun exercising vigorously in the hopes that it would help his prognosis, and the doctors told him to keep doing what he was doing — don’t stop with the physical activity.

He didn’t.  When Chris was diagnosed with stage III colon cancer at 34, he was in tremendous shape. He weighed 208 pounds with just 8% body fat – the result of years of diligent training and a commitment to a healthy lifestyle. Chris’ fitness helped him endure treatment, but his cancer journey took its toll. From the time he first went to a doctor for lower abdominal pains to the time he was discharged from the hospital after surgery, a period of just six weeks, Chris dropped 40 pounds.

Since then, Chris has been driven to reach his goal of surpassing the condition he was in before being diagnosed, and as you can see, he is well on his way.

Chris is driven to stay in shape in part by the fear of cancer or rheumatoid arthritis recurring or another disease popping up. He knows that being healthy reduces the chances of getting colon cancer and improves his chances of recovering from colorectal cancer and many other diseases.

As a trainer and coach, motivating others is part of Chris’ job. Chris volunteers to train high school basketball players, and before cancer, one of his motivational tools was pulling the “old guy” card. “Hey, if I can do this, and I’m 20 years older than you, then you should be able to do this.” Now that he has battled cancer, Chris has an even greater motivational tool. “Oh, you’re tired?  Well, I had cancer.” He does it in a joking way, but his clients hate it. “Screw you,  Chris, you can’t use the cancer card!”

But he does use it. Because it works. Chris understands that people view cancer survivors as an inspiration. His clients tell Chris he inspires  them, and encourage him to tell his story. He does, and plans to continue.

Chris’ passion for fitness, his experience in motivating people and his desire to not see others go through what he went through, makes him a powerful speaker.

When Chris tells his story, he can hear it generate emotion. Chris’ story is so effective because it is about
much more than physical fitness. It also is about being your own health advocate.

Like so many other young colorectal cancer survivors, Chris endured several misdiagnoses, and unnecessary tests and hospital stays before his doctors finally ordered a colonoscopy. They simply thought he was too young to have colorectal cancer.

His story is one of personal loss. Chris’ father died of esophageal cancer 12 days after Chris left the hospital, and his grandfather died of brain cancer just one month later.

His story also is one of concern for his teenage son, Chris’ inspiration during treatment, who has seen his father, grandfather and great-grandfathers all wage battles against cancer.

Perhaps most telling is the impact Chris’ journey has had on his own life. It’s changed the way Chris lives day to day. He’s so much more inspired to accomplish his goals. He wants to be able to let go of the little things that don’t matter. He wants to have a bigger, deeper relationship with his wife and son. And maybe most importantly, he wants to be as happy as he can for as long as he can.