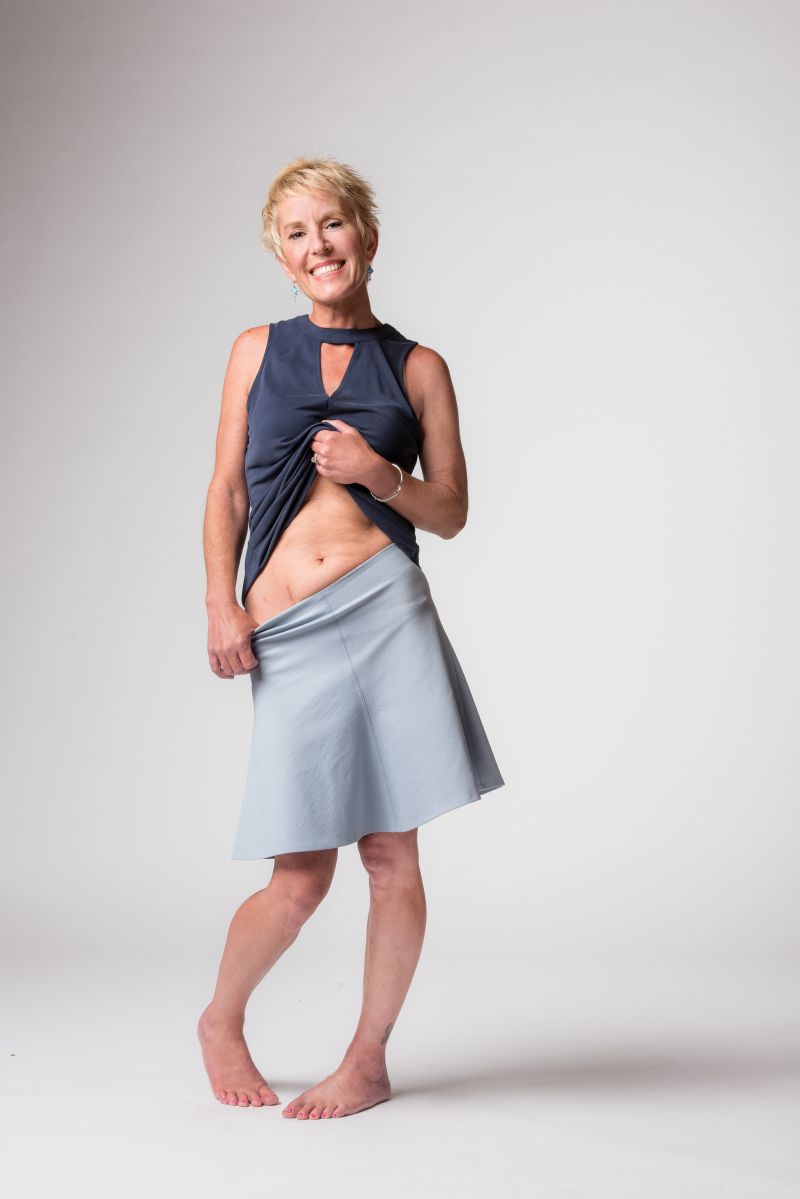 “They’re in the microwave, honey.”

That’s how Candice Davies’ unconventional cancer journey started, by “losing my words,” as she puts it, and becoming forgetful. With a family history of Alzheimer’s, she was concerned, but only went to see a doctor when urination problems threw themselves into the mix. An initial battery of tests failed to find out what was wrong, but Candice’s primary care physician was determined. Running out of ideas, he floated the idea of a colonoscopy. Candice didn’t see how that would help— there was no history of colon cancer in her family and her problems were with her head, not her intestines—but went along with it.

The colonoscopy uncovered two polyps, a small one that was readily removed and a larger one that called for surgery. “It’s nothing to be alarmed about,” her doctor assured her, “Removal will be easy peasy.” Unconcerned, Candice pushed it out of her mind and turned her attention back to her upcoming wedding to her second husband, Chris.

Candice had colon surgery the week after returning from her honeymoon to Panama City Beach (which, yes, was amazing). Surgery was on a Monday, and by Wednesday she was begging to leave; she had just received news that her grandmother had passed and wanted to get back home to family.

Besides, the upcoming Thursday and Friday nights were evenings she had been dreaming about for years. Candice is mother to four children, three boys and a girl. Her two oldest boys are upperclassmen on the high school football team, and Thursday was “Football Dinner for Mom” night. Moms are feted that evening and receive letters of appreciation from their player-sons. Candice had been to a “Mom’s Night” before, but this year she was going to get not one, but two letters. There was no way she was going to miss that evening.

To top it off, Friday would be her first “Senior Night”, which meant she would get to walk her oldest son across the football field before the game. Knowing better than to get between Candice and these moments with her boys, her physician released her from the hospital. Candice was able to attend both nights and cherished the moments. She gushed over her appreciation letters and despite being in pain, was able to walk her senior boy across the field.

One week later, Candice returned to the hospital for her follow-up appointment. Her surgeon came in and got right to the point, “We have the pathology report. It’s stage III colon cancer. We need to schedule a surgery to place your port.”

Her world stopped as she tried to take in the news, responding with confusion and questions: “What?!?! No… you must be wrong. What do you mean I need a port placed? What are you talking about?”

She took a moment to compose herself, rose up, told the doctor, “Above everything else, I’m a mom, and I have to go to student conferences now,” and walked out. She doesn’t remember which teachers she talked to that night or what they said, she was so numb from the news.

Candice turned to the routine of everyday living for comfort as she worked through seven months of chemotherapy. She was grateful that those moments after waking, when all of the possible of outcomes of cancer swirled madly in her head, were kept brief, disrupted by the responsibilities of being mom. Every day she woke the kids, made them lunch, and got them out the door for school. She dutifully played the role of mom all throughout chemotherapy, attending all of her kids’ functions. She would be damned if she was going to let cancer take that from her.

As with many parents who battle cancer, Candice frames her survivorship goals in terms of her children’s milestones. She frequently tells her new husband, “I need 11 more years,” so that she can see her youngest off to college. When Candice recently reminded Chris of this as they were making retirement plans, he replied, “I need 13. I want two years where it’s just you and me together.” Candice teared up. Her husband has been nothing but wonderful, but she worries that sometimes her journey is harder on him than her.

With chemotherapy finished, and her hair growing back, Candice is hopeful that her cancer journey is over. She has a very positive outlook on life, and believes that while bad things can label you, like “stage III colorectal cancer survivor,” you can’t let them define you.

How Candice has defined herself is “mom” and “wife”, and she is looking forward to playing those roles for a long time to come; more mornings of waking the kids and seeing them off to school, more “Mom Nights” with her football boys, and ultimately, a long time with her new husband, just the two of them, in their planned retirement home in Florida.