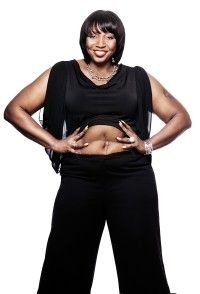 Candace had abdominal cramping and hadn’t had a significant bowel movement in weeks, but her history of “female” trouble masked the cancer. Because she didn’t fit the age criteria, no one thought about colorectal cancer. After numerous hospital visits, one doctor finally decided to test her for colorectal cancer. Although it’s not clear why, African-Americans are more likely to be diagnosed with colorectal cancer at a younger age and a later stage, and are about 30% more likely to die from the disease than Caucasians. Candace shares her story every chance she gets to help give others the much-needed support that she didn’t have.

I have been surviving cancer for six years and it has been the hardest six years of my life and the life of my family. I often tell people that I feel like my life has been hit by a hurricane that went undetected and when it was all over I was left with devastation that hit all corners of my life, physically, emotionally, financially, and psychologically.

It took 6 months for my diagnosis. I began having bowel problems in December of 2002 while celebrating with family for an upcoming wedding. My stomach was in knots and cramping, and I realized that I had not had a sufficient bowel movement in almost two weeks. I had to be taken to the emergency room. There I received a small cup of “human draino” that opened the flood gates of my bowel system that every other product was unable to do. The sad part about my emergency room visit is that no one thought to check me out to see why I was having such problems with my bowels. I was so happy the hospital had a product that helped me move my bowels that I almost kissed the nurse in gratitude.

Late January of 2003, I was experiencing light headedness, seeing spots and had unexplainable fatigue. I passed out at work and was admitted into the hospital because I had a blood count of 6.4 and had to receive a blood transfusion. I had a history of female problems, which consisted of an over-active uterus and right ovary. I had two surgeries to remove both and it was presumed that the problem was resolved.

June came around and I made another trip to the emergency room, this time because of a bad case of acid reflux (which has nothing to do with colon cancer). Finally, I was asked about my health history for the past year and submitted to a blood test. The resident came back with the attending physician and said that my blood count this time was 5.2. It was a blessing that I came to the hospital when I did and I had to have another blood transfusion. I was then asked if anyone mentioned to me about having a colon-rectal exam to which I replied, “No.” I was given a Fecal Occult Blood Test (FOBT) to determine if blood was in my stool and the test was positive.

Once the doctor confirmed that it was colon cancer, I had no idea how much my life was going to change. I lost all thought pattern and I didn’t know how to process the information I had just been given. I wanted to ask questions, but I did not. She went on to offer me a therapist I could talk to, but what would I talk about? What could I say when I had no brain waves? I found myself so numb, that I didn’t even have any tears. I remember her saying, “Wow, you took that very well.” I was scheduled for surgery in the morning.

I was diagnosed with Stage IIB colon cancer.

I had my large intestine removed and a resection to the small intestine, which would prove to be a challenge later on. Reality began to catch up with me when I got home. I was not able to care for myself. I had to rely on family and friends to take care of me. The woman that held down a stressful blue collar job as a bus driver, a mother of 5 daughters, the sister, the daughter, the niece, the best friend, the superwoman as I was referred to every now and again, was now taken down by cancer. What a blow!

I was now at the mercy of myself and I had no clue on how to begin to heal. I did not know anyone who had colon cancer, or cancer for that matter that was alive to tell about it. I tried to talk about it to family and friends, but as much as they had sympathy for my experience, they were clueless as to how to help me feel better and I was no help. I pretended that I was dealing with everything just fine. I would put on the fake smile when people would see me to help ease their shock because I had gone from a healthy 189 lb, 5”11 frame to 149 lbs, within just 9 days of my surgery, so I was very scary to look at. But everyone put on the brave face for my sake. Then the other problems started to kick in. My job disability paid only $184.71 a week, but I had a mortgage payment of $927. There were utility bills, not to mention the needs of the children. I used the money from my deferred compensation plan, but it was not enough. I called agency after agency with very little results if any at all and that coupled with all of the other stresses weighing on me, it finally caught up to me. Depression began to take over.

I was suicidal and spent five days in the hospital on twenty-four hour watch. I counseled while in the hospital. I hid my emotions trying to regain my image as “Wonder Woman.” I finally began talking about it and someone told me to cry, scream or do whatever I needed to do within reason, but let it out and own my feelings without being apologetic to everyone about what I was going through. In the end, I lost my house, but I had my life.

Colon Cancer Alliance Voices of Chicago is an important organization for people like me. I became a part of this, because I believe in the concept of alleviating the suffering caused by colon cancer on all fronts.

My family and I suffered. I have been picking up the pieces of my life everyday and I tell people I am not a survivor, but I am surviving cancer. Every day is a new challenge. I am no longer the vital woman I once was, but a fraction of that person who struggles everyday to put her life back in order. The CCA would have been a very important source of my recovery had I known about them, thus realizing the need for awareness. There is a need for everyone to know of a place to call and receive help when you need it, be it financial or someone to connect with who will understand when you say, “I am not myself anymore. I hurt almost every day,” without being embarrassed. Do you know how embarrassing it is not to have control of your bowels anymore? Who would understand that? Have you ever been there?

We need your help! Creating awareness and expressing the importance of early detection is the key. Colon Cancer is Preventable, Beatable and Treatable when diagnosed early.