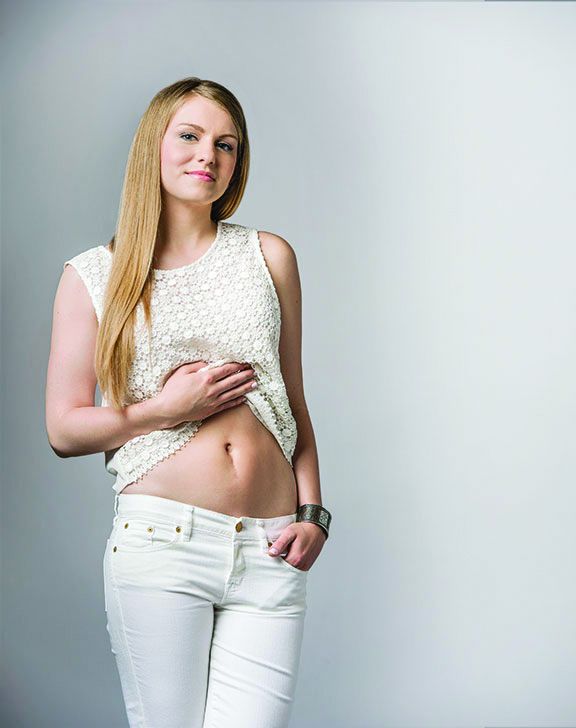 Eating healthy was always what I was known for and that may have been partially due to the fact that I had colon cancer. I seemed to have a sensitive stomach and would get terrible pains easily so I avoided fatty and fried foods. Eventually the pain got almost unbearable, but I blamed it on the stress of nursing school and my hour-and-a-half commute to school in Brooklyn. Then I noticed blood in my stool and large amounts of it. I knew this wasn’t normal and coincidentally was studying the GI system in my medical-surgical course in school. I decided to see a GI doctor at Long Island Digestive Disease Consultants. Dr. Baranowski listened to my symptoms and recommended I get a colonoscopy. I was apprehensive but wanted answers to my distressing symptoms. Prior to having the colonoscopy, I needed blood work done. Dr. Baranowski called me as soon as he got the results and asked if I was feeling tired. I told him yes, but I do get up at 5:00AM to go to school and usually don’t get back home until 8:00 at night. He told me it was probably more to blame on the fact that I was dangerously anemic. Once I arrived for my colonoscopy he was contemplating whether or not to complete the colonoscopy because of my dangerously low lab values. He decided to proceed to possibly figure out the cause of my anemia.

When awaking from my procedure the nurse asked if I would like my boyfriend, Jesse, to come in while the doctor spoke to me. In my post-sedated state, I didn’t suspect that bad news was coming. Dr. Baranowski came in and informed me they had found a large mass and suspected it was colon cancer. I broke down. I couldn’t believe this was happening and instantly phoned my parents who live six hours away in upstate New York. They were in shock and left within the hour to make the drive to Long Island. The doctor told me he had a bed reserved for me at a nearby hospital where he knew an experienced surgeon who could perform the partial colectomy. I was immediately set up to receive a blood transfusion and was not allowed to eat or drink anything to prepare surgery. I felt extremely weak from the previous preparation I had for the colonoscopy. I had never in my life been hospitalized or even had an IV and now I was here lying in a hospital bed with a blood transfusion and fluids being administered awaiting surgery. My parents arrived that night and stayed with me as long as they could. The next morning, I saw everyone again and went in for surgery that afternoon. That night I don’t remember much, but the next morning I was in great pain from the gas they pumped in me to expand my abdomen during the laparoscopic surgery. I realized that my experience in the hospital was proving to be the most valuable lesson in nursing care. Being on the receiving end of care made me appreciate the small things nurses can say and do and I promised to make this part of my nursing philosophy.

I spent 4 days in the hospital and then was released. My parents had to return home because I have a young brother who was 3 at the time and needed them back. This is when Jesse took over and cared for me deeper than I knew anyone could. Our 3-year anniversary was March 15, 2012, and we spent it together in the hospital, but he still made me feel beautiful and loved despite the situation. He cared for me around the clock making sure I was as comfortable as possible. While I was trying to readjust to eating he cooked whatever sounded good to me whenever I wanted it. He helped me do all my simple activities of daily living that proved difficult after surgery.

Once I had healed I met with the oncologist I had been seeing in the hospital. She informed me that since 3 of the 15 lymph nodes removed were positive, I would require chemotherapy for 6 months. I got a second opinion from Sloan-Kettering in Commack and they agreed with the treatment plan. Because of Sloan-Kettering’s reputation I stayed with them through my further treatment. I had a port placed for my chemo treatments and went every 2 weeks. I decided it was best to have my treatments on the weekends so that I could try and continue nursing school. I started treatments on Friday and disconnected at home with Jesse’s help on Sunday. I struggled with my white blood cell counts becoming extremely low throughout my treatment. I had Neulasta and Neupogen injections after every other treatment to increase my counts. My low white blood cell counts put me at risk for infection when travelling throughout New York City for classes and clinicals, but I managed and only missed a few classes.

In August I graduated from school and met my goal! I felt so accomplished to have overcome such a challenge. I continued chemo until October 2012 and then I was finally done! I then passed my nursing boards and was officially a registered nurse.

To increase my odds, I am staying healthy by eating a vegetarian diet rich in fresh raw veggies and fruits. Jesse and I love cooking all three of our daily meals and are even in the process of starting a food blog. We just got a puppy, Prima, in November and love taking her for runs on the beach next to our house. I try to appreciate all the beauty in life now because life is BEAUTIFUL!