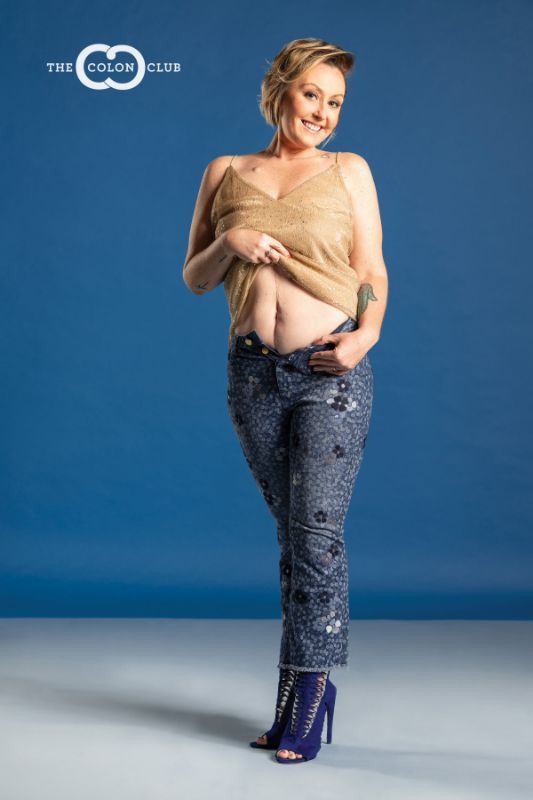 Britt Ochoa, a self-described “desert dweller with a thirst for wanderlust,” had just married her husband and was living the normal life of a 27-year-old. After pain sent her to the doctor, Britt was told she had a urinary tract infection. But the pain she was experiencing did not fit that explanation. A trip to the emergency room with her husband, Steve, revealed that she had a softball sized tumor on her left ovary. Three days later she was scheduled for laparoscopic surgery.

On her way into surgery, Britt mentioned she had noticed blood in her stool. She was not sure why she decided to share that, but the reason for the blood would soon become clear. What was supposed to be a two-hour surgery, rapidly changed after the discovery of an additional football-sized tumor on the outside of her colon. It had pinched her intestine so much that it was almost completely shut. Britt had Stage IV colon cancer. In hindsight, she realized that the bloody stool was not the only colon cancer symptom she had. The unexplained weight gain that she had attributed to a sedentary job, was due to the tumor and her inability to completely evacuate her bowels.

While Britt was still in surgery, Steve was in the waiting room being told his wife has colon cancer. He was inundated with paperwork to sign, so the surgeon could do anything necessary to remove the cancer from her body. Britt says of her husband, “I can’t even imagine being in that situation. I almost prefer to be the one with the cancer because I couldn’t handle it being the other way around.”

Britt awoke from surgery ten hours later to a room full of people she loved. She immediately knew something was wrong and noticed her husband was not present. No one would tell her what was going on. She started asking what time it was. Britt explained, “I figured if I could find out the time, then I could figure out how long my surgery was and what was going on.” Her husband had briefly gone home to let their dog out and requested that no one tell Britt what had occurred until he returned. Unfortunately, the doctor shared his findings with Britt before Steve got back to the hospital. She immediately asked what the plan was and realized she had no idea what a Stage IV colon cancer diagnosis entailed. A port would be placed, and she would start chemotherapy. But first steps needed to be taken to preserve her fertility.

Steve was livid about Britt receiving the news of her cancer diagnosis without him. But after an apology from the doctor, he and Britt concentrated on trying to preserve a possibility of future children. They learned infertility was a possible side effect of all treatments for young colorectal cancer patients. So, six weeks later, Britt started IVF treatments to store embryos. Unfortunately, it was unsuccessful.

Britt and her husband were of course disappointed, but they carried on and focused on treating the cancer. Britt started chemotherapy with her rocks, Steve and her grandmother (affectionately known as Nan) at her side.  Treatment was tough, but nine months later she was told during a hospital stay she had no evidence of disease. She had a party and celebrated the end of treatment and her NED status.

At a follow-up one month later with her oncologist, Britt was informed that she was not cancer free as they had believed and there was a new tumor. She wanted to take a trip to see family in England and asked if she could delay the start of chemo for one month. She was given the go ahead but was not put on chemotherapy even after returning from vacation for an additional three months.

In the four months Britt had been off chemotherapy, the cancer spread like wildfire to her right ovary, uterus, stomach, abdomen, and her colon. Her oncologist said there was nothing that they could do and referred her to a surgeon. Britt had a hysterectomy and her second colon resection. The surgeon had some advice for Britt’s husband regarding her future treatment: Take her to Mayo Clinic.

Once Britt started at Mayo, she switched oncologists, immediately started chemotherapy, and became a candidate for a HIPEC (hyperthermic intraperitoneal chemotherapy) procedure. Britt saw HIPEC as a chance to get a break from chemotherapy and went for it. One month later, the cancer returned, and she started chemotherapy again. In the time since, the cancer has stopped responding to treatment and a clinical trial. Britt is currently pursuing different options.

Even after all the extensive surgeries and over 100 rounds of chemotherapy, Britt found the mental aspect of cancer to be more difficult than the physical. She was in a very dark place, did not want to do anything, and had trouble finding the positives in her life with cancer. After she worked through that time, she remembered something her mother said. “What you think about, you bring about.” She started accomplishing little things around the house with her Nan as her sidekick. She started traveling more and saying yes. Although she was lost for a time, she now wants to help and encourage others. Britt explained, “This diagnosis is not for naught. There is a purpose.”