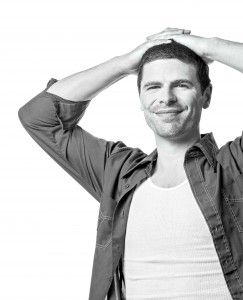 He was supposed to be choosing paint colors and arranging furniture in his new home. Instead, he was dealing with colon cancer.

In the middle of a family dinner several months prior to his diagnosis, Brian had the urge to use the restroom and noticed a toilet bowl full of bright red blood. He held off scheduling a colonoscopy when symptoms subsided. That is, until it happened again on the morning of his 30th birthday.

While nobody suspected the just-turned 30-year-old to have a tumor, a colonoscopy revealed stage I colon cancer. Through the course of surgery, recovery and cancer survival, Brian made relationships that forever changed his outlook and understanding of life. As he processes the “why’s” of cancer, his adventuresome spirit keeps him looking ahead and reaching for what’s next.

It first started after a family dinner at my in-laws. My wife and I had been living with them while saving up for our new house and in addition to a free place to stay, her parents usually made great dinners as well. After this meal in April of 2011, I felt the urge to use the bathroom. Things felt normal until I stood up and saw the toilet full of bright red blood. It completely caught me off guard and I went to go tell my wife. She said we should call her stepfather, an ER doc and wilderness medicine expert. He explained that bright red was better than dark red and that it was probably a hemorrhoid or a fissure. He suggested I get in to see my physician just to make sure it wasn’t anything more serious. He was doubtful anything bad would come from this.

I went to see my doctor, who did a little scope and didn’t see anything. According to him, that was a good thing that he didn’t find anything but also a bad thing as he couldn’t explain the blood. He said that given my age, I should get a colonoscopy to rule out anything serious and because I was only 29, I more than likely wouldn’t typically get a colonoscopy until I was 50! Twenty years seemed like a long time to wait. So I took his advice and tried to schedule an appointment with a gastroenterologist. However after making the initial call, I didn’t return their phone calls and kept putting off the colonoscopy. I didn’t have any more symptoms and the blood quickly subsided.

My 30th birthday present… bright red blood in my stool.

That all changed a month later on the morning of my 30th birthday. My wife surprised me with a great hotel room and after a fun night with friends, I woke in the morning to find another large amount of bright red blood in my stool. Little did I know at the time that would be the best 30th birthday present ever. It was enough to call the gastroenterologist back and schedule an appointment.

My first visit was just a consultation. He, like my physician, recommended a colonoscopy and we scheduled it for June 28. My wife and I had just bought our first home together, had been trying to start a family, and were excited to be out of her parents house and on our own. We certainly didn’t think I had cancer or anything serious for that matter. We didn’t even really talk about it. That all changed after my procedure.

Let’s beat this thing and get on with life!

I remember waking up in the recovery room with my wife at my side and we had already started figuring out where we were going to go eat (as that’s the logical thing to do after not eating for the past 24 hours.) I heard the gentleman next to me receiving his results from the GI doc and knew he was shortly on his way. I figured I would hear the same thing and be on my way. But when the nurse asked us to go into the doctor’s office, I knew something was off.

The doctor who did my colonoscopy sat across from us and explained that he had found a tumor and that he was 99.9% sure it was cancer. I’m not sure what the look on my face was, but the thoughts in my mind immediately went to, “Alright, let’s beat this thing and get on with life!” I’m still able to maintain that attitude, though unfortunately things wouldn’t turn out to be so easy.

My wife and I were in quite the state of shock on the drive home. Normally after a colonoscopy, doctors say that patients will usually be groggy and a bit amnesic. Certainly not me! I remembered everything from the moment I woke up after the procedure, especially the words coming out of my doctor’s mouth. CT scans, blood work and a surgical consult were scheduled for the next day and we had some serious information to process and some phone calls to make.

Obviously this was hard, but the hardest part involved calling my father who had recently lost his wife and sister in the same year to cancer. That was the most difficult phone call I’ve ever made in my life.

My wife and I prepared for the CT scan, which to me was the most stressful aspect of everything because it involved the most uncertainty. Fortunately, our radiologist was a good friend of ours who happened to be a cancer survivor himself. After the scan he walked us through the results and they were really positive. It didn’t look like the cancer had spread anywhere and my liver was spotless!

After the scan we had the surgical consult which was awesome. My surgeon, Dr. Sara Mayo, put my mind at ease with her demeanor and steady hand. I felt totally comfortable putting my life in her hands. That’s a feeling I’ll never forget.
More phone calls and talks with family followed. We scheduled surgery for July 12, two weeks after my diagnosis, and started preparing mentally and physically. My wife and I had been in our new home for less than three weeks, and instead of focusing on what colors to paint the walls and how we couldn’t wait to tear up the gross carpet upstairs, we were focusing on cancer. That sucked.

I was nervous about surgery, but confident in my surgeon. My wife works at the hospital where I had surgery and knew many of the doctors. The general consensus was they’d all happily put their lives in the hands of my surgeon. Pretty good praise to settle the nerves. Instead of having a house warming party, we had a “Pre-surgery Shindig.” Many friends came out to the new house to give support and encouragement. It was great to see so many great friends come together to show their love. The next day I started prepping for surgery.

Now I’m prepared to have annual colonoscopies, but cleaning my bowels twice in two weeks was really enough to last a lifetime. After spending the night on the bathroom floor, we woke early to head into the hospital. Spirits were generally high and I was ready to wake up cancer free. I was processed through the line pretty quickly and in no time there was an old man with an electric shaving razor clearing the path for surgery. I got to meet with my surgeon before I was put under and felt ready to go.

What was supposed to be three hours turned into five, but I came out of surgery feeling good. I spent probably a couple hours in the recovery room before I was wheeled up to my room for the night. My wife was with me the whole time. Both our mothers were relieved to learn things went well. They were nervous wrecks the whole day.

The next seven days were an adventure unto themselves, but I will most clearly remember Jake, another young cancer patient who was staying down the hall. He was 39, had been working to get healthy, had just lost 100 pounds, and had just been diagnosed with stage 4 non-Hodgkin lymphoma. We became fast friends, walked a lot around the halls of the hospital and talked about getting well together. My prognosis was good: stage 1 and I’d learn later that no chemo was required. Jake’s was not so good. Four months later, I was rock and ice climbing on Mount Washington in northern New Hampshire and Jake was gone. At his funeral I spoke about trying to understand why him and not me, but ended with no understanding at all.

The reasons of who lives and who dies with cancer will always remain unclear to me. Sure there are environmental causes and genetic causes, but ultimately it’s random. Fortunately my physician had the presence of mind to send me in for a colonoscopy. I’ll continue to live the rest of my life under surveillance, but the knowledge I have with me now can save my life and the lives of my family.

I’m almost 8 months out now from my diagnosis and I feel good. My energy is back, my incisions are healing and my stomach muscles are starting to get strong again. Things have certainly changed; my bowel movements are much more frequent and the smallest twinge in my abdomen scares me. However cancer has changed my perspective on life. I challenge myself to never regret a moment, to live more deliberately and to always try new things. I was an adventurer before and will continue. I am strong. I am grateful. I am me.