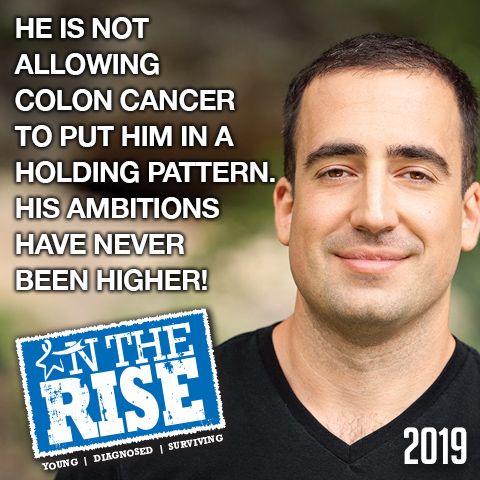 In aviation, a holding pattern is when a pilot is instructed to keep flying while waiting for permission to land. Lieutenant Junior Grade Naval Aviator Ben White’s life was in a holding pattern for a year when he was “grounded” while undergoing cancer treatment. In November 2018, Ben was medically separated from the Navy after being found unfit for duty.

The tailspin of Ben’s life began while he was stationed in Jacksonville, Florida, just after getting his wings. After months of increasing ailments followed by numerous emergency department visits and hospital stays, Ben had a CT scan. His doctor reported, “It looked like a grenade went off in your intestines.” Doctors at the hospital on base tried to convince Ben he had diverticulitis and assured him he was too young for colon cancer. Both of Ben’s parents are nurses, and his sister is a nurse practitioner. With their medical backgrounds, they were quick to question a diverticulitis diagnosis.

Colorectal cancer, as well as diverticulitis, are on the rise in young people. A study led by the American Cancer Society concluded that those born after 1990 have double the risk of colon cancer and quadruple the risk of rectal cancer compared to people born around 1950. The average age of diagnoses in both colorectal cancer and diverticulitis is 50 or older. To suggest one while completely discounting the other didn’t make sense to Ben’s medically educated family.

Afraid of perforation if a colonoscopy was attempted, Ben had what was supposed to be an exploratory laparoscopic surgery to finally determine the nature of his ongoing illness.

Ben awoke to find his surgeon standing over him explaining that the exploratory surgery had become an emergency colectomy. The surgical team removed a lemon-sized tumor from his sigmoid colon and approximately fifteen centimeters of intestines. He also had a temporary colostomy.

When the pathology reports came back and staging was complete, Ben was diagnosed with stage IIIB colon cancer at the age of 26. In a three-month period, he went from his dream job flying helicopters for the Navy and living on the beach in Florida with three other naval aviators, to living with his parents 3,000 miles away in California.

Ben’s treatment plan included chemotherapy. He said about this time, “Every other week for three days straight, I pumped copious amounts of poison into myself in the hopes of killing the worse poison that my own body has ever created. As if that wasn’t enough, a piece of my intestines poked out of my abdomen, through which I pooped uncontrollably into a bag that hung off my body.”

Ben’s attitude and mindset are what pulled him through this dark time. He could have crashed, but he chose positivity. He put it this way, “Looking up from the bottom of this pit I’ve been thrown into, it would be easy to curl up in a ball of my own self-pity and wait for this storm to pass, knowing that no one would fault me for it. This is not the route I have chosen. My fall from the top has left me battered and bent, but not broken. So each day I look for the silver linings amongst my many storm clouds and use them to start pulling myself out of this pit.”

One of the things that helped Ben out of this dark place was the Positive Engagement And Response (PEAR) Cards project. PEAR Cards have short conversation starters that focus on the positive aspects of one’s life. PEAR’s mission is to encourage positive conversations. Volunteering his time to launch PEAR Cards with two of his best friends has helped Ben stay focused on positivity. “It isn’t my baby, but I’m helping raise it,” said Ben about the project.

Ben completed six months of chemotherapy and had his colostomy reversed. Cancer free, he still has significant neuropathy symptoms and chemo brain among other post-treatment side effects. He will continue to have blood work done every three months, CT scans every six months, and a colonoscopy annually. For now, he is enjoying time at home with his family and is spending the next 6-12 months traveling before deciding what his next professional adventure will be. “My ambitions have never been greater. Long term, my post-treatment life is more than a little uncertain, but I’m making plans and contingency plans in case those fall through. And backup plans for my contingency plans. The world is suddenly my oyster—all it’s pearls mine for the taking. I want to spend all my days in the sun. With the rest of my time, I want to burn brilliantly—to make ashes, not dust.”