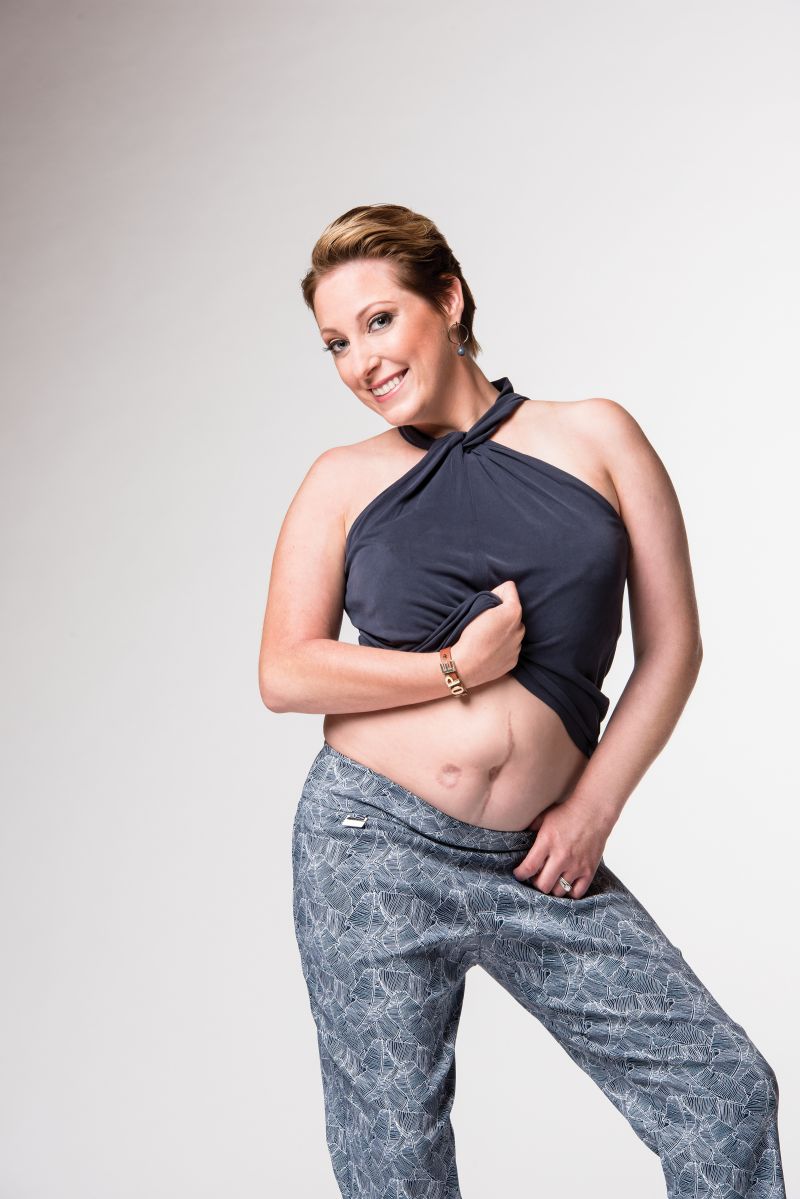 Ashley had been having symptoms of stabbing abdominal pain, blood in her stool, bloating, unexplained weight loss, and fatigue for about four years. She went to her general practitioner, where she was told she had hemorrhoids. For two years, her symptoms continued, yet she dismissed them still as hemorrhoids.

In April 2013, gas and a blockage made her look like she was six months pregnant. She went to the ER where a colonoscopy revealed there was a tumor on her colon. Fearful of the word cancer itself, Ashley had an exploratory laparotomy/sigmoidectomy, and the surgeon found the tumor had spread to three lymph nodes, indicating she had stage III colon cancer. She had 12 rounds of chemotherapy, which she tolerated well with the exception of the neuropathy from time to time. She was told she was NED afterward and had faith she was done with cancer.

That faith would quickly turn to fear again in August 2014. During a routine CT scan, doctors found a mass in her left ureter, causing hydronephrosis. They weren’t quite sure what it was, so Ashley endured another exploratory laparotomy. The mass was in fact a tumor, giving her a Stage IV diagnosis this time. Her oncologist said they would try chemotherapy and radiation, but that it may not work.

“I felt doomed. I was certain this was the end, my world was closing in,” she says. “I went home to my daughter that day and hugged her tightly. The thought of my daughter growing up without a mother gave me incredible sadness and great anxiety.”

Ashley reached out to MD Anderson, in Houston, feeling it would be the best place for her treatment. She and her husband, A.J., flew down from her home state of Kentucky three days later in October 2014. Her new plan was to head back to Kentucky to ensure no new growth, and then proceed to chemo and radiation in Houston for December through January 2015. Surgery would follow if things went according to plan.

Thankfully, they did. While A.J. had to return to Kentucky for work, Ashley kept Aubrey in Houston with her. She had family and friends there to help her throughout treatment.

Slowly, her faith began to return.

After a return to Kentucky to heal from radiation, Ashley traveled back to Houston for an en bloc resection of the bladder and ureter reconstruction. She had a temporary ileostomy for four months. She also had three stints put in her kidneys because they were starting to atrophy from the hydronephrosis. She returned back home to Kentucky to undergo four more rounds of chemotherapy. Finding out from a PET scan that her cancer was once again gone, Ashley felt elated and at ease. Her belief that her daughter wouldn’t be without a mother was put to rest for the moment.

She was thrilled to return back to work in January 2016. Then, three months later, at a follow up visit to MD Anderson, she learned the cancer had returned to her right ovary. Surgery revealed the cancer had spread to adjacent structures in her pelvis. Because her doctors were concerned they wouldn’t get clear margins, the cancer lesions were not removed. “The joy of returning to work came to a crashing halt,” she says.

She began 12 cycles of chemotherapy following her surgery. The tumors were shrinking, yet MD Anderson was not willing to honor her request into looking at HIPEC surgery. It was more than likely that her cancer would return and she wouldn’t be a chemo candidate after the HIPEC surgery.

Feeling devastated, Ashley would have 12 more cycles of aggressive chemotherapy before starting maintenance chemotherapy to prevent a recurrence. She currently tolerates her chemo well, usually only having two bad days every other week, and her body continues to respond to it.

While she fully trusts her team at MD Anderson, Ashley has begun to seek out other hospitals for their opinions on treatment options. She continues to have faith that she can live with Stage IV colon cancer with her maintenance chemotherapy, that it will work until there is a cure, or maybe the cancer won’t come back ever again.

The future is forever unknown and can be rather scary for Ashley to think about. The love that shines from Ashley’s eyes for her now five year old daughter, allows her to remain hopeful, knowing that it has gotten her this far already. Most importantly, she wants to be around for her daughter forever and to help promote awareness of colon cancer to everyone.

“Hope and faith have brought me this far,” she says. “I hope and pray it carries me to a cure!”