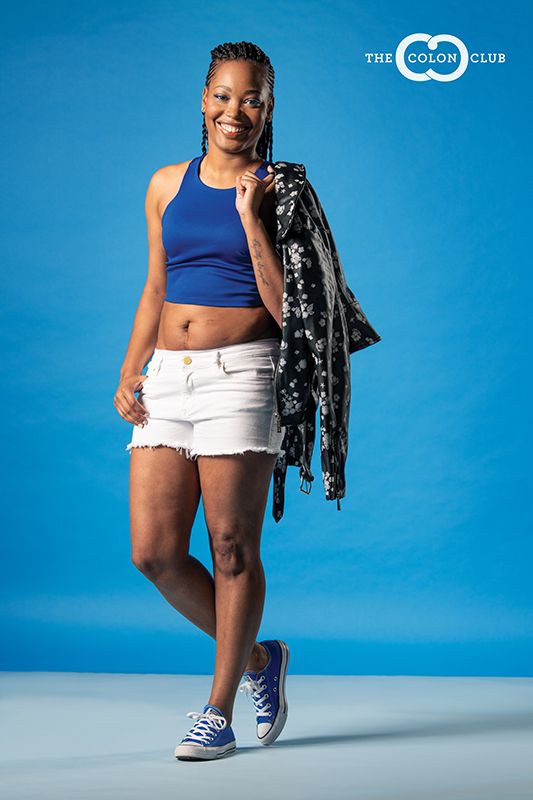 In 2009, April Gardner was living in Birmingham, Alabama, to be closer to her mom when she started having pain in her abdomen. April previously had insurance through the military and was waiting for her new insurance to start through her job. Uninsured, she went to her mother’s gynecologist. After only a physical exam, she was told she had a cyst on her ovary. April felt no further tests were ordered to confirm this diagnosis because of her lack of insurance coverage at the time.

Two years later, April decided to move to the New York area. She was packed and ready to go when her father, Ricky, passed away unexpectedly. While facing this tragedy, April noticed the pain in her abdomen was becoming more intense.  She canceled her move to stay close to her sister after their loss, and the pain she attributed to stress continued.

April was no stranger to living in pain. She was diagnosed with fibromyalgia and chronic fatigue syndrome as a teenager, but she knew this was different. She went to her primary care physician and gynecologist multiple times and was given different diagnoses. One ultrasound stated she had a cyst, while another did not. She was told to take pain medication and go on bedrest. April continued to work fulltime through the pain and frustration of being disregarded by all her doctors.

Her mother had enough. She went to the doctor’s office and demanded they do something to help April. The doctor ordered a referral to a gastrointestinal specialist, but April would have to wait a month. During that month, she began seeing blood in her stool, and the pain sent her to the emergency room. She was not even seen by a doctor because the ER staff did not believe her pain was that intense. Knowing she had an appointment coming up, they told her she was constipated and sent her away. After so many years of pushing through pain daily, she did not look like she was hurting as badly as she was.

April finally met with the GI doctor and a colonoscopy was performed. April had Stage II colon cancer. Through the years of being ignored, April learned to be her own advocate. This is her advice: “Fight for yourself. You know your body better than anyone else. Keep telling what is happening to you until they listen.”

April started her treatment with surgery to remove her tumor. When it was time to start chemotherapy, April discovered her insurance was not accepted at the hospital where she had her colon resection surgery. She was forced to get her chemotherapy infusions at a different hospital. She says it was a blessing in disguise because she ended up with an amazing oncologist who most likely saved her life.

April went in for her first chemotherapy and had awful side effects immediately. She relayed her side effects to her nurse. It was too early for her to have the symptoms of prolonged chemotherapy, and April saw no improvement even after being off treatment for several days. When she went in for her next treatment her blood cell counts were very low, and she reviewed her side effects again. Her doctor was out of town, but a nurse contacted him about April’s immediate and severe reactions. He ordered a test for dihydropyrimidine dehydrogenase deficiency, or DPD for short, and told the nurse to hold April’s treatment until he had results. April tested positive for DPD and was unable to process any medications in the fluoropyrimidines family, which includes 5-FU and Xeloda. Both of those drugs are standard treatment for colon cancer. Essentially, April was being poisoned because she could not breakdown and remove the toxins in her body like most patients. Studies show that as an African American woman, April was more likely to have DPD, but the deficiency is not common. Her doctor told her that only 1 in 4000 patients test positive for DPD, and he had only seen three cases in his entire oncology career. If April’s doctor had not ordered the test, she may not have survived her second chemotherapy infusion.

On April’s 27th birthday, she was told she could not continue chemotherapy and the surgery she had would be her only treatment. She would only receive scans in the future to see if the cancer returned. Fortunately, she has had no evidence of disease ever since.  As a result, she says, “I was given a second chance to fly.” And fly she has. April is giving back and advocating for other young patients and spreading the word about DPD. She volunteers for various organizations and cofounded “The Signs of Life,” a group that shares the stories of those affected by cancer, inspirational messages for anyone touched by the disease, and pictures of survivors thriving. April attributes her perseverance through cancer to her dad. Her father worked for Coca-Cola for many years, and in all the moments where April needed extra encouragement and love she would see a Coca-Cola truck. This let her know he was still with her. April says, “He gave me his strength when he left.” And April is sharing that strength with the world.