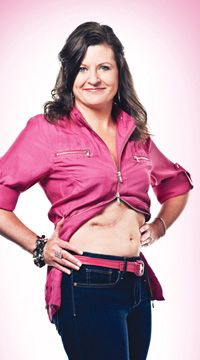 I thought I would do something a little different in telling my story – start at the present and work my way back.  I have learned after being diagnosed with cancer that today is what matters.  Focus on today, because none of us knows what tomorrow brings — cancer or not.

Today I am a stage IV colon cancer survivor. I am sharing my story because I believe survivor stories provide hope to others and may even help save lives; I believe they helped save mine.  In the midst of my late stage diagnosis, hearing stories of people surviving impossible odds like I was facing helped in ways I cannot begin to re-pay or even explain.  I believe hope is a very powerful thing.  I have friends and I’ve met other cancer survivors who were not expected to make it, yet they did.  A dear friend of mine was told she had two weeks to live after her cancer diagnosis.  Today, almost 14 years later, she is still here and cancer-free.  I don’t believe any doctor can put a timeline on our lives, and I thank my doctors for never putting one on mine.  Although statistics can be relevant, I don’t believe in living by them.  There is a powerful thought around cancer survival statistics: your number is either 0 or 100.  Concentrate on the 100 and don’t worry about the rest.  If you are reading this right now, I believe you too can be an exception to any grim statistic out in the world.

I’m also sharing my story to help educate others.  Before my diagnosis, I thought because I was under age 50 with no family history of colon cancer, that I was somehow protected – except if you have symptoms.  Looking back, I realize now that the diarrhea, severe gas pains and narrow stools were something I should not have ignored; they were not normal.  For several years I dismissed these symptoms as IBS; they somehow became a regular, accepted part of my life.  Honestly, I was a bit embarrassed and scared to talk to my doctor about it, which could have cost me my life.  So if you have symptoms, including changes in your bowel habits, don’t be afraid to speak up and demand to be tested via a colonoscopy.  It could save your life.  The only embarrassing thing about colon cancer symptoms is not speaking up about them. And it’s not unusual to be dismissed by doctors who think it can’t happen if you are under age 50.  Colon cancer is a 100% curable cancer if caught early, no matter what age you may happen to be.  I’ll take those statistics, thank you very much.

Now it’s time to look back.  In January of 2007, I went in for my routine yearly physical.  At the very end of my appointment, I mentioned to my doctor that I thought I was having more diarrhea than was probably normal, that something felt off in my body, but I really wasn’t concerned.  I was feeling a little nervous because I had turned 40 that year and just had my first mammogram that day.  Late that same evening, I received an email from my doctor saying that my mammogram looked great, but my blood work was very concerning.  The results showed that I was extremely anemic, and she thought I was perhaps losing blood in my bowels, maybe due to something like colitis.  She wanted me to have a colonoscopy so we could figure out what was going on.

On March 12, I went in for a colonoscopy.  I was nervous but fascinated and wanted to watch the procedure.  When it was almost complete, I felt a grip on my arm and the nurse said, “I’m sorry.” I don’t remember anything else until I woke up in the recovery room and my husband was there looking very sad and concerned.  They had discovered a large tumor in my upper colon that was causing almost full blockage, which meant they were unable to even get the colonoscopy scope past it.  The first surgeon we met with that day brought a picture of the nasty looking tumor and said they were pretty sure it was cancerous and that it had probably been there for at least 5-8 years.  A CT scan a little later showed spots on my liver, so on top of this very terrible news, there was even more terrible news that the disease was possibly in a late stage and had spread.

I honestly don’t remember much about the next two days.  My husband and I were in such a state of shock, disbelief and sadness. I have always been adamant about my health care and paying attention to things in my body.  At the time of my diagnosis, I had 89-year-old grandparents and a long line of grandparents and great-grandparents with no cancer who all lived into very old age.  I always took it for granted that I would too.  I went along thinking and hoping that cancer would never happen to me, and when it did, it was such a blow.

Thanks to a terrific team of doctors and surgeons, I had surgery three days after diagnosis, where they removed two feet of my large intestine and approximately 20% of my liver.  I had three tumors in my liver (one non-cancerous), which they were able to remove with clean margins.  I spent eight nights in the hospital and it was one of the hardest things I have ever experienced.  Thankfully and honestly, I remember very little of it.  One thing I do remember is getting up to take a walk to the door of my hospital room; it was an almost impossible task.  I had a long road ahead of me.

I started a chemotherapy regimen seven weeks later, 12 treatments every other week of Folfox with Avastin, followed by a 5-FU pump I wore home for 48 more hours.  Chemotherapy was one of the scariest things I have ever faced.  Reading all the possible side effects and not knowing which ones I would have to experience was frightening.  I had already lost 17 pounds from surgery, and was so scared to lose any more weight.  I had treatment #1, and although I was never sick, I was feeling pretty weak and tired and ended up losing three more pounds.  Being frail and helpless is one my biggest fears, so I decided to seek out help from a cancer naturopath I heard about.  It was a turning point in my treatment.

The naturopath encouraged healthy eating and oncology-approved supplements to help me through chemo.  He had me on a high protein shake every day that helped protect my digestive system from the toxic effects of chemo.  He even told me I could gain weight when I was going through treatment, and I did.  Although the chemo got harder and beat my system down a little more each time, I only had one delay in treatment, which was due to low white cell counts.  I was able to stay healthy as I went through chemo.  My naturopath encouraged me to walk 5,000 steps (5 miles) a day during treatment.  Surely he was kidding!  I could hardly walk to the mailbox.  But I worked myself up and was soon walking over four miles every day, with the exception of infusion day.  With every mile I walked I got stronger in body and spirit.  And studies show that regular daily exercise can cut the chance of a cancer reoccurrence in half – that was enough for me.  The only thing my husband asked of me while going through treatment was that I drink my shake every day and walk.  Very wise.  Thanks to the incredible company I work for, I was able to take a 10-month leave of absence from my job, and that also proved to be invaluable.  I made it my full-time job to take care of myself, and I believe it has paid off well.

I returned to work in January of 2008.  I am the same person, but have definitely made some dramatic lifestyle and diet changes.  Exercise is now a part of my regular routine.  I have a renewed sense of confidence and strength that has surprised me; I really try to not sweat the small stuff.  Cancer has taught me to appreciate the simple and sacred moments of life, like listening to my son laugh or smelling the salt air at the beach.  I have really learned to embrace the everyday moments that I took for granted prior to my diagnosis.  Now it’s my job to make sure I hold on to that.  I will never say that cancer is a gift, as some do.  The pain, fear and stress it has caused my family is something I wish I could take away, and that will never change.  But I have learned along the way that there are many silver linings.  The support and love from my friends, co-workers and family, especially my husband and son, pulled me through a really hard time and made me feel more loved than I ever have in my whole life.  I met several guardian angels along the way.  Maybe I can be one someday, too.