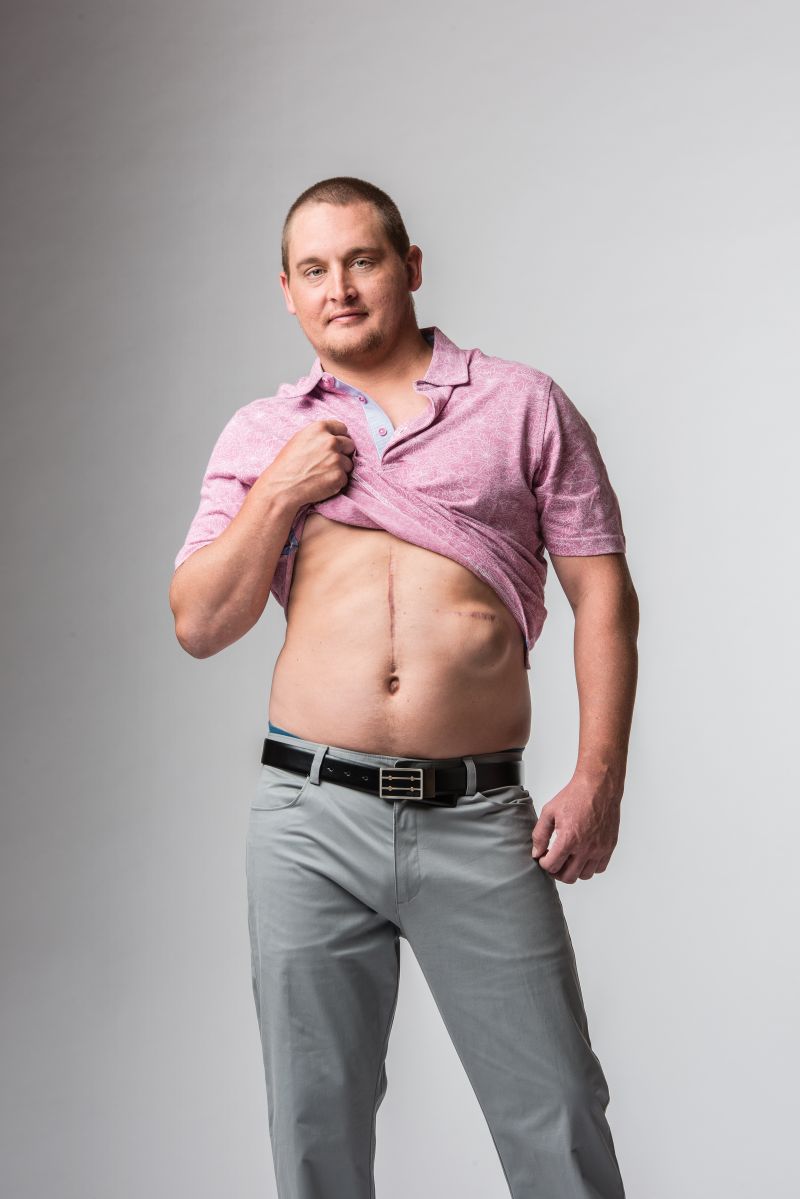 According to the National Cancer Institute, several studies indicate an increased risk of colorectal and small bowel cancers in people with Crohn’s disease. One study estimates the risk is 20 times greater than the control population. Diagnosed with Crohn's disease at the age of 18, Andy Tiefenthal was used to juggling doctor appointments, medicine, treatments, routine colonoscopies, and lab work with the activities he enjoys in his life: golf, hunting, and coaching basketball and football. But when he was diagnosed with Stage IV cancer at 31, he was shocked. “How does someone closely monitored end up with Stage IV cancer?” Andy can’t help but wonder, unfortunately it is a question without a clear cut answer.

Andy’s wife, Danielle, was 24 weeks pregnant with their first child when he began having increased Crohn’s symptoms. After a colonoscopy, his doctor said everything looked better than the last scope, except for one very small spot which he biopsied but assured Andy and Danielle, “It likely isn't anything to worry about, because it is small and soft—so even if it was anything it was good they caught it so early.”

Two days later the doctor called with biopsy results: positive for invasive adenocarcinoma. A scan revealed cancer was also in Andy’s liver. They sought a second opinion at the University of Michigan. “Their prognosis was poor. They offered no options. They suggested we go home and do treatment to hopefully prolong my life,” Andy recalls.

A family friend suggested Andy contact Dr. Nancy Kemeny at Sloan Kettering in New York. When Dr. Kemeny, who specializes in colon cancer patients with metastases to the liver, accepted Andy as a patient, he started flying to New York from his hometown of Manistee, Michigan every eight weeks.

Eight months after his son Tripp was born, Andy had surgery to removed his gallbladder and place a HAI pump. The goal of the pump is to shrink his liver tumors enough so they can be surgically removed. Andy is very thankful for his local oncologist, Dr. Carol Peterson, who agreed to care for him in between trips to Sloan Kettering despite never before having a patient with a HAI pump.

Andy and Danielle are also very grateful for all the community support they’ve received since this journey began. The Manistee News Advocate published a beautiful article about Andy when he was initially diagnosed. Martin Marietta Corporation, where Andy has worked as an electrician for eight years, has been outstandingly supportive through all Andy’s treatment. Fundraisers were held to help offset travel and medical expenses. Andy was featured in a video for Spectrum Health Ludington’s Be Someone’s Angel campaign. And the Annual Doug Schlaff Memorial Scholarship Golf outing donated all of its proceeds in 2016 to the Tiefenthals. (Mr. Schlaff was Andy’s high school basketball coach.)

Andy isn’t exactly comfortable with all the attention, but handles it as he handles everything… stoically.

“As December 18, 2016 approached, I thought a lot about what had changed in one year,” he says now. “We were married, diagnosed with cancer, went through a complicated pregnancy, and enjoyed the birth of our sweet baby boy. Physically, mentally, and financially the journey has been exhausting. We’ve come a long way in just over one year. We’ve grown stronger together than we would have ever imagined. We know the future is uncertain, but we choose to believe it’s actually that way for everyone. We live a much more optimistic life the past few months, and we hope that we can share this optimism with other people who are in that darker place that we were in not too long ago.”