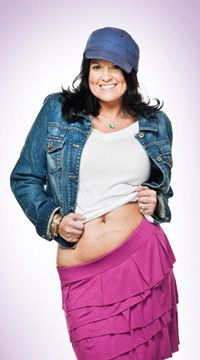 My name is Andrea Bruno. I am 29 years old. Twelve years ago, my colon and I began our journey getting to know one another.

The year before my 16th birthday, I began losing weight, having diarrhea, and bleeding rectally. I was mortified by my symptoms so I hid them for as long as I could. One morning while getting ready for school, I felt so terrible I finally spilled to my mom everything that had been going on. We then went to our family physician, who accused me of being everything from depressed to bulimic. After a few months of being put on too many medications to mention, and not being taken seriously, I was sent to the hospital. It was then that a gastroenterologist performed a colonoscopy and diagnosed me with Crohn’s disease. (Crohn’s disease is a chronic inflammatory bowel disease, causing inflammation of the digestive tract.)

At this point I was so sick I spent most of the following year in and out of the hospital. While my friends enjoyed after school activities, I had to have Remicaide infusions, and multiple surgeries for fistulas. (Fistulas are abnormal tunnels connecting a body cavity through the skin to the outside of the body.) In time, the Crohn’s disease became manageable, with only minor flare ups over the next few years.

At age 25, I began experiencing terrible belly pain and rectal bleeding, which continued to worsen over the next few months. I went to a doctor in NY who unfortunately dismissed my symptoms and refused to perform a colonoscopy.  After a year of this torture, I took it upon myself to find help elsewhere. My dad and I, through a lot of research, found an amazing doctor in NYC who took my condition seriously and performed a colonoscopy. Because of the time that had passed and lack of support from my former doctor, my transverse colon was completely obstructed and the inflammation from my Crohn’s disease had turned malignant. I was diagnosed with Stage 1 colon cancer. I was devastated and hurt. December 17, 2006 I was sent for an emergency right hemicolectomy and 18 inches of small bowel were removed.

These events, although terrible, were learning experiences. Life has taught me to “Listen to what your body tells you. If someone won’t listen to you when you’re in trouble, find someone who will.  It could save your life!”

I feel that Crohn’s disease and colon cancer are blessings in disguise. I have learned to stay positive, and even found my career niche. I am now an Endoscopy Technician, and am continuing my education. I hope that by telling my story and showing off my scar, it will encourage others to tell their stories and help save lives.

Not long before I was asked to take part in the Colondar, my best friend passed away from cancer. I would like to dedicate my page to you, Adam. You were always my rock, and the reason I am still here today.