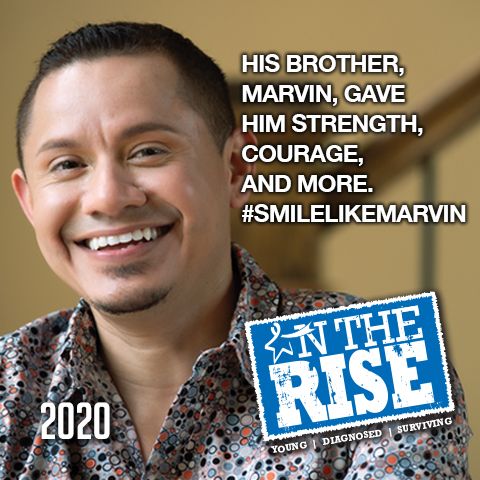 Born in tropical El Salvador, Dennis Arrivillaga was the youngest of three siblings and raised in Los Angeles, California, for most of his life. He grew up in a loving, close family environment where they were taught by their amazing parents that no task was too big, and no dream was too far to reach. Dennis and his big brother Marvin lived by this advice.

Dennis and Marvin grew up feeling unstoppable. That was the truth until Marvin intended to enlist in the United States Air Force after high school. During his enrollment steps, blood tests showed some abnormalities. His kidney showed deficiencies, which immediately prevented him from enlisting in the Air Force.

Further testing showed Marvin’s kidneys were failing at age 30. While he waited to welcome his first daughter, Sophia, he started dialysis. As if Marvin’s dialysis wasn't harsh enough, he was diagnosed with Stage IV Colon Cancer soon after welcoming his second child, Dylan.

Dennis witnessed Marvin’s strength and his willingness to undergo harsh treatments for kidney failure and for his colon cancer. Even though both treatments were counteracting one another, he fought hard with a huge smile which became his hashtag, #SmileLikeMarvin. No matter what he was going through, he smiled. Marvin was told many times he wouldn’t survive weeks or months, but he always told his team of doctors they were wrong with a smile.

Marvin underwent HIPEC surgery in San Diego and had no evidence of disease in his body. Soon after, he relocated with his wife, Stephanie, and kids to Minnesota where she’s originally from. Marvin wanted to see where his kids would grow up and get to know his wife’s side of the family, in case he wasn’t around long. Up to that point, Dennis’s side of the family witnessed Marvin’s story unfold, with unconditional love and support.

This became a crucial moment in Dennis’s life, and he knew he needed to move closer to his brother. He lived with his parents, and the idea of leaving them and moving across the country was out of his comfort zone and felt plain crazy. But he loved his brother, niece, and nephew too much to see them go far away without his support.

He looked for jobs within the Twin Cities in Minnesota without much luck in 2015, but as faith and luck would have it, he transitioned into a role that allowed him to work remotely. Dennis knew then he needed to find himself an apartment near his brother’s new place in Minnesota. In early 2016, he did.

The week he landed in his new city, Marvin had a setback and was sent to the hospital. It was terrifying, but Dennis knew he was in the right place. He was mentally and physically ready to be by Marvin’s side when he needed him most. Dennis thought he would give his brother strength and courage, but Marvin was teaching him that and more. He taught Dennis to be “strong, resilient, and unbreakable.”

Late in 2015, Dennis took his brother to one of his appointments and discovered his cancer was back and more aggressive. Marvin still smiled while his health was deteriorating little by little. Dennis had his parents and brother fly in to stay with him with each bump in the road, just in case anything happened. Every time his family would fly in, Marvin recovered from the setbacks. His parents would fly back to California, and things would stabilize. This occurred four more times that year. While Marvin was in treatment, Dennis became involved in advocating for his needs and rights with his medical team and through social media for better awareness.

Marvin passed away in July 2016. He never saw Dennis’ first home purchase in 2017. Dennis decided to stay in Minneapolis to be near his nephew and niece and for his family to fly in frequently to visit. Dennis states, “It’s hard to see my family separated by cancer. But being purposeful and aligning my life with my niece, nephew, and parents helps me cope. Marvin left too soon. My duty and responsibility are to carry on the advocacy he started and to keep his memory and efforts alive. I do it for myself, my parents, my other brother, and my niece and nephew, who are left without their courageous dad. These kids need to know who their dad was and to get the word out as far as screening, so less families get separated by this horrible, disruptive, destructive disease.”